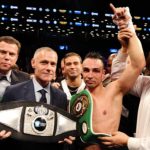 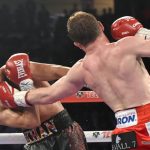 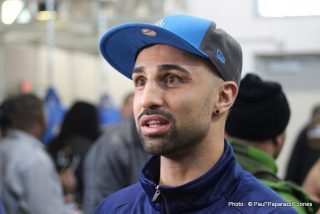 The 34 year old American publicly ‘retired’ from the sport after August’s stoppage defeat at the hands of Danny Garcia, though was back in the ring only a month later, beating journeyman, Laszlo Fazekas (27-21-1) by 8 round decision in Milan, Italy.

After seeming to retire following August’s loss at the hands of Danny Garcia, former world champion and current Showtime analyst Paulie Malignaggi (34-7, 7ko) had a pretty swift change of heart, boxed again last month in Italy, and now claims he wishes to chase the European welterweight title, given that he is eligible to do so through his Italian ancestry.

The soon-to-be 35 year old Malignaggi was stopped in 9 by Garcia in what was an emotional night in August, ostensibly signalling the end of an era for the proud Brooklyn resident – who gave an impassioned post-fight ‘retirement’ speech – although a little over 6 weeks later he was back in the ring in Europe, beating journeyman fighter Laszlo Fazekas (27-21-1) over 8 one sided rounds in Milan. 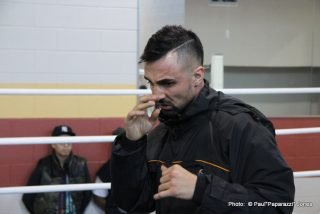 After his recent stoppage loss to Danny Garcia in New York, local favourite and former two-weight world champion Paulie Malignaggi appeared to decide that the time had come to bring the curtain down on his long career, emotionally announcing that his time to retire was nigh, and that he would be seeking to focus on his burgeoning, and successful career, as a ringside analyst for Showtime and Sky Sports in the UK.

“You hate to make an emotional decision. My career started in Brooklyn 14 years ago. If it ends in Brooklyn tonight, then at least I ended it at home, where I’m from, and in front of the greatest fans in the world. I’ve got a really good job commentating and watching great fighters fight ringside. I hope to sit around ringside for a long time.” 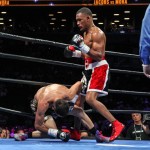 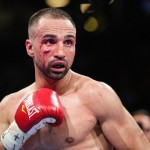 (Photo credit: Lucas Noonan/Premier Boxing Champions) It looks like the curtain could well have come down on the long career of Brooklyn’s Paulie Malignaggi after defeat at the hands of former 140 lb champion Danny Garcia in New York last night, with “Swift” looking the bigger, stronger and bossier fighter throughout the 9 rounds the contest lasted.

Paulie was rocked backward by Garcia’s crisp jab in the opening round and that immediately set the tone of what was to come, with Malignaggi cut around the right eye early and looking like the 15 months of activity, coupled with his advancing years, had taken their toll on him. 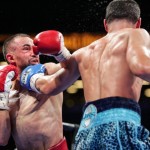 Garcia was able to control the fight with lead rights and counter left hooks that kept the agile Malignaggi from landing anything significant. The punishment took its toll on Malignaggi as a cut opened up on his right eye in the third round. 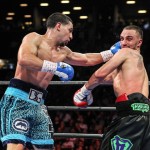 (Photo credit: Lucas Noonan/Premier Boxing Champions) We may have seen the end of former two division world champion Paulie Malignaggi’s career tonight with him getting beaten up and stopped in the 9th round by former WBA/WBC 140lb champion Danny Garcia (31-0, 18 KOs) at the Barclays Center in Brooklyn, New York. The referee prematurely stopped the fight at 2:22 of the 9th round after Garcia stunned Malignaggi.

It didn’t matter that Malignaggi seemed to recover from the shot and was fighting back. The referee Arthur Mercante Jr. decided he’s seen enough from Malignaggi and chose to stop the fight. Malignaggi was cut in two places around his right eye at the time of the stoppage. However, the fight wasn’t stopped because of his cut. 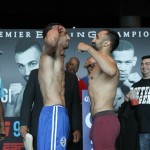 (Photo credit: Lucas Noonan/Premier Boxing Champions) Danny Garcia & Paulie Malignaggi do battle in Brooklyn at the Barclays Center this Saturday night live on ESPN. Daniel Jacobs faces Sergio Mora which represents his toughest test since being stopped by Dmitry Pirog in 2010. The card faces the normal scrutiny that many Al Haymon events get but this scribe won’t be surprised if one of these match ups test the favorite more than fans think. Will the move to welterweight help or hurt Danny Garcia? Can Jacobs look impressive against a defensive fighter?

If we rewound the clock to just under two years ago we would find Danny Garcia at the top of the junior welterweight division. The Philadelphian’s victory over Lucas “The Machine” Matthysse placed him on the doorstep of the elite level and the exposure of being the co-feature to Mayweather/Canelo Showtime PPV raised his profile immensely.