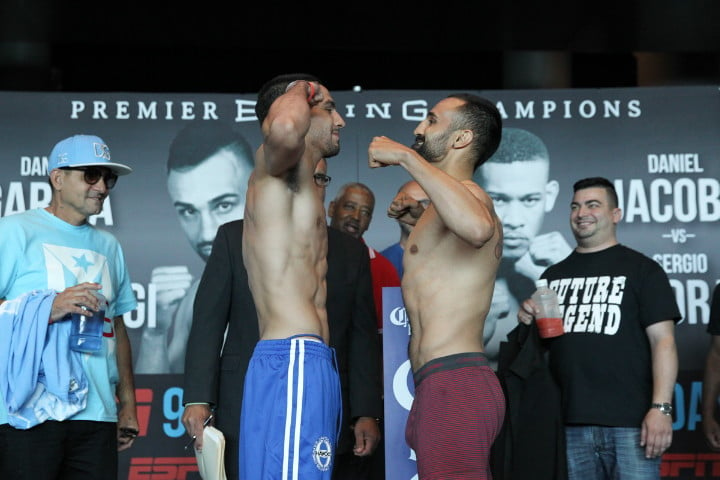 (Photo credit: Lucas Noonan/Premier Boxing Champions) Danny Garcia & Paulie Malignaggi do battle in Brooklyn at the Barclays Center this Saturday night live on ESPN. Daniel Jacobs faces Sergio Mora which represents his toughest test since being stopped by Dmitry Pirog in 2010. The card faces the normal scrutiny that many Al Haymon events get but this scribe won’t be surprised if one of these match ups test the favorite more than fans think. Will the move to welterweight help or hurt Danny Garcia? Can Jacobs look impressive against a defensive fighter?

If we rewound the clock to just under two years ago we would find Danny Garcia at the top of the junior welterweight division. The Philadelphian’s victory over Lucas “The Machine” Matthysse placed him on the doorstep of the elite level and the exposure of being the co-feature to Mayweather/Canelo Showtime PPV raised his profile immensely.

Garcia’s next challenge was billed as a homecoming of sorts in a fight against an unheralded contender Mauricio Herrera in Puerto Rico were Danny’s family’s blood line is rooted. The media brushed the matchup aside by underestimating the quality of fighter and style matchup that Mauricio Herrera posed. Herrera’s craftiness from the outside and at times on inside troubled Garcia all night long. Since that point on it’s been all downhill for Danny after a horrible mismatch against Rod Salka and an unimpressive point’s win over Lamont Peterson in April.

In the lead up to Saturday’s bout with Paulie Malignaggi, the Garcia camp has stressed the importance of Danny’s health at the welterweight division. Angel Garcia’s plan of moving his son slowly to welterweight via catchweight seemed to of backfired amongst fans and in the ring possible due to his son’s struggles to make weight. Judging by the looks of Danny’s body and overall demeanor from a health standpoint the move to 147 was long overdue. However, Garcia’s effectiveness at 147 may not be known until he gets in the ring with a bigger puncher.

Stylistically speaking Paulie Malignaggi is a throwback defensive boxer who deplores a solid jab and steady punch output. If it wasn’t for Malignaggi’s last outing ending in brutal fashion by the fists of Shawn Porter, anticipation would be much higher surrounding this fight outside of the borough of Brooklyn. The powers that be at the PBC and ESPN found enough interest in the matchup because of the name recognition of both men.
If Paulie is fully healed from the 2014 concussive beating he took it could be a tough fight for Danny. Boxing, as in life, isn’t fair and no matter the result Danny Garcia will not get any credit should he be victorious. If he loses it will only increase the hate towards the both Danny and Angel Garcia.

Both fighters are very active and a few experts have compared this fight to Paulie’s two fights with Juan Diaz. The biggest differences is Diaz being more active but with far less power than Garcia. Can Danny cut the ring off on “The Magic Man” or will he ineffectively follow him similar to his last fight with Lamont Peterson?

Look for Paulie to land his jab mixed with movement and some spurts of combination punching. How long will it take for Garcia to close distance so he can land his bread and butter, the left hook to the head and body? Another key to look for will be Garcia’s overhand right over the top of Malignaggi’s jab. If Paulie is sharp there’s a chance this fight will be close late instead of a just a showcase bout most perceive it to be.

The pace will be entertaining and competitive up until Garcia finds his rhythm. Garcia’s jab is underrated and it will come in handy to contain Paulie’s activity. The fact that Malignaggi has been out of the ring for 17 months and coming off such a devastating loss makes me favor Danny by close but clear victory. If Danny hasn’t made the correct adjustments that plagued him in the Herrera and Peterson fights we could be in for a big upset.

My official prediction is Danny Garcia by unanimous decision

The co-feature pits Daniel Jacobs against Sergio Mora. If victorious it will be his best win to date. Mora is a crafty vet who can be difficult to hit clean and might be willing to test Danny’s chin, which has been vulnerable at times throughout his career. Mora knows he won’t win many rounds by running in his opponent’s back yard so expect an uptick in activity. The “Latin Snake” will have his moments but Jacobs will win going the distance.

Also, don’t miss an interesting UK fight this weekend involving Luke Campbell and Tommy Coyle from Hull, Yorkshire at the Craven Park Stadium. This is a great step up bout for Campbell and I see him coming out on the winning end possibly by late KO or TKO. Brian Rose vs. Carson Jones 2 could be a tightly contest on the undercard.
Written by Chris Carlson Owner & Host of Rope A Dope Radio blogtalkradio.com/ropeadoperadio
Follow on Twitter @RopeADopeRadio