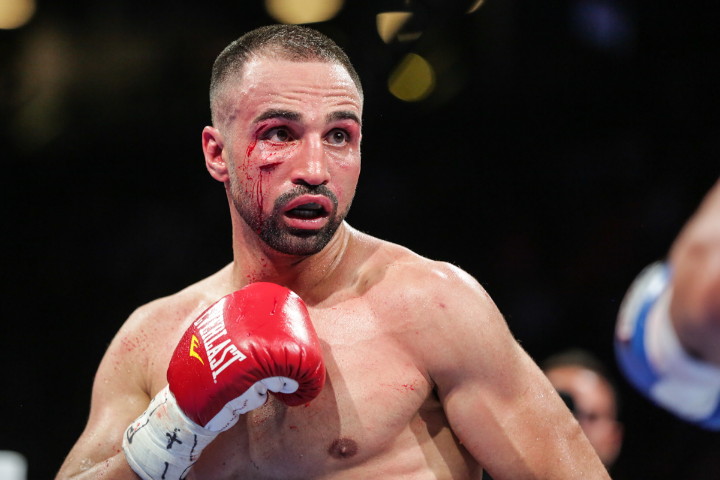 (Photo credit: Lucas Noonan/Premier Boxing Champions) It looks like the curtain could well have come down on the long career of Brooklyn’s Paulie Malignaggi after defeat at the hands of former 140 lb champion Danny Garcia in New York last night, with “Swift” looking the bigger, stronger and bossier fighter throughout the 9 rounds the contest lasted.

Paulie was rocked backward by Garcia’s crisp jab in the opening round and that immediately set the tone of what was to come, with Malignaggi cut around the right eye early and looking like the 15 months of activity, coupled with his advancing years, had taken their toll on him.

He looked slow and was boxing like a man who seemed to know it was only a matter of time, neglecting his jab for large periods and thus, all the natural work that flows from it.

Garcia, up on his toes, was fresh and strong and kept pushing Malignaggi back through the mid-rounds, punishing the fading New Yorker who looked ready to go at any moment. When that moment came in the ninth it was perhaps a little premature with Malignaggi staggering back towards the ropes after a quick left-right hand, only to see referee Arthur Mecante Jr step in after Garcia landed another short flurry as a flustered Malignaggi backed off.

In truth, it was only a matter of time.

“I feel strong, I feel good. I used my jab,” said Garcia immediately after the fight. “I still have things to work on, but I’m proud of myself – 147 is where it’s at. I felt a lot stronger. In the ninth round, I felt like it was round one, (though) I need to work on shortening up punches and sticking with the game plan.”

A crushed Malignaggi, seemingly crying in the corner after the end had come, confessed he simply doesn’t have it anymore;

“I’m probably not fighting again,” he said afterwards. “You hate to make an emotional decision. My career started in Brooklyn 14 years ago. If it ends in Brooklyn tonight, then at least I ended it at home, where I’m from, and in front of the greatest fans in the world.

“I’ve got a really good job commentating and watching great fighters fight ringside. I hope to sit around ringside for a long time.”