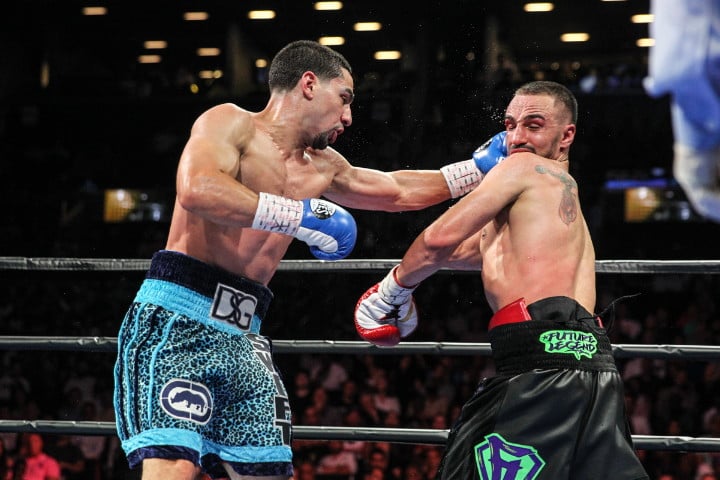 (Photo credit: Lucas Noonan/Premier Boxing Champions) We may have seen the end of former two division world champion Paulie Malignaggi’s career tonight with him getting beaten up and stopped in the 9th round by former WBA/WBC 140lb champion Danny Garcia (31-0, 18 KOs) at the Barclays Center in Brooklyn, New York. The referee prematurely stopped the fight at 2:22 of the 9th round after Garcia stunned Malignaggi.

It didn’t matter that Malignaggi seemed to recover from the shot and was fighting back. The referee Arthur Mercante Jr. decided he’s seen enough from Malignaggi and chose to stop the fight. Malignaggi was cut in two places around his right eye at the time of the stoppage. However, the fight wasn’t stopped because of his cut.

It was stopped because wasn’t landing anything meaningful. He was just moving around and trying not to get hit. Every once in a while, Malignaggi would land a soft pitty-pat shot that had no effect on Garcia, as he would through it without any problems.

Malignaggi had nothing to hold Garcia back with. He was landing shots, but Garcia was taking them and smiling. The entire fight, Garcia was on a seek and destroy mission against the Salka-like Malignaggi, and it wasn’t entertaining to watch. What it was mostly was disappointing, because it was so ESPN. It was like watching one of the usual mismatches that ESPN used to show on Friday Night Fights. Malignaggi vs. Garcia was a fight that was destined to be a mismatch the moment that it was put together. It’s just too bad the fight was made because Garcia can do a lot better than this. If he can’t, then he needs to ove back down to 140.

The Garcia-Malignaggi fight was televised on Premier Boxing Champions on ESPN. It was a disappointing fight to say the least, and the same could be said about the mismatch in the co-main event between WBA “regular” middleweight champion Daniel Jacobs (30-1, 27 KOs) and Sergio Mora (28-4-2, 9 KOs). That fight was stopped in the 2nd round when Mora fell down and suffered an ankle injury without being hit. Jacobs was given a 2nd round TKO win after Mora couldn’t continue fighting, but it was a weird way of winning by a knockout when your opponent slipped on the canvas without being hit.

Mora was knocked down in the 1st round by a right hand from Jacobs. After the knockdown, Jacobs forgot about his defense and he went after Mora. But moments later, Jacobs was on the canvas himself after getting tagged by a left hand from Mora. The first round was great. The 2nd round was a disappointment with Mora suffering an ankle injury and needing to be taken to the hospital.

This was Jacobs’s second voluntary defense. He says he wants to fight Peter Quillin next. The World Boxing Association will have to give a green light to that fight because that’ll be Jacob’s third voluntary defense in a row.

“No rematch, no reason to go backwards,” said Jacobs after the fight. “Thank God for this victory, but I’m not going to give him a rematch just because. I think these Brooklynites deserve something special and I think me and ‘Kid Chocolate’ would be that special fight here at Barclays, and we’re on the ‘A’ side now, we’re champions, so let’s do it!”

You can make an argument that neither Jacobs nor Quillin are A-side fighters. They both look well below WBA middleweight champion Gennady Golovkin in terms of talent. If they’re A-side fighters, then what does that make Golovkin or guys like Saul “Canelo” Alvarez and Miguel Cotto. I believe those three fighters are A-side guys. Quillin and Jacobs are more like B-side fighters. Jacobs has the WBA strap in his possession, but a lot of boxing fans see him as a paper champion. Jacob’s performance against Mora tonight probably didn’t change any of his critic’s opinion about him being a limited B-class fighter holding down a paper title.