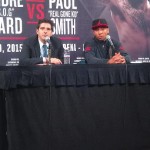 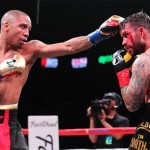 (Photo credit: Tom Hogan – Hoganphotos/Roc Nations Sports) Andre Ward resurfaced after a long absence and steamrolled British super middleweight Paul Smith at the Oracle Arena in Ward’s native Oakland, Cal. Ward spent two of his best years away from the prize ring due to legal and promotional disputes. He came back as shiny as new and kept his opponent in the crossfire for 9 rounds before the bloodied Smith was bailed out by his corner.

If there was any ring rust, it was shadowed by the skill differential which gave Ward full convenience. Coming from a 19 month layoff he was not expected to choose a tough challenge although Smith was no push over. The Brit went the distance twice with Arthur Abraham in his last two fights. This probably legitimized him as an opponent for Ward who did much better than Abraham. The American was on a different level and had an indecently easy time against his tough but over-matched foe. Ward exhibited his boxing talent and his speed allowed him to do whatever he pleased in the ring. There was a catch though, the catch weight clause. 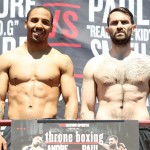 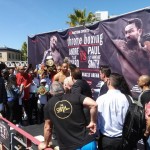 Smith’s camp decided to accept the fine rather than lose the additional weight required of all professional fighters. Smith may somehow think that the extra weight may give him an advantage over Ward, who has not fought since 2013. 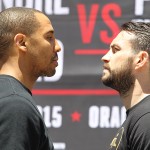 (Photo credit: Tom Hogan – Hoganphotos) Former P4P boss Andre Ward – removed from most lists through his 19 months of inactivity – is keen to make a statement on Saturday night when he fights Britain’s Paul Smith in his Oakland backyard, insisting to Sky Sports – who are screening the bout – that he is out to tell the world he is back.

It’s a monumental task that the Liverpool fighter is facing – irrespective of Ward’s inactivity – and the former 168 lb world title challenger will further be hindered by the 172 lb catch-weight insisted on by the American. 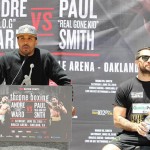 (Photo credit: Tom Hogan – Hoganphotos/Roc Nation Sports) Despite it being his first fight in over a year and a half on Saturday, Andre Ward is in confident mood ahead of his in-ring return against Britain’s Paul Smith, with all signs pointing toward it being nothing but routine business for the American fighter against a man expected to be hopelessly outgunned.

One Brit who Ward was interested in facing once more, is Carl “Will he, Won’t he retire?” Froch – whom the American comprehensively outclassed back in 2011.

“I haven’t felt this feeling, fight week in Oakland, in awhile. Last week those emotions started to set in. I’ve been focused and getting ready, but fight week is just different. No matter the magnitude of the fight you should feel like this. I’m excited. I’m used to this kind of pressure.”