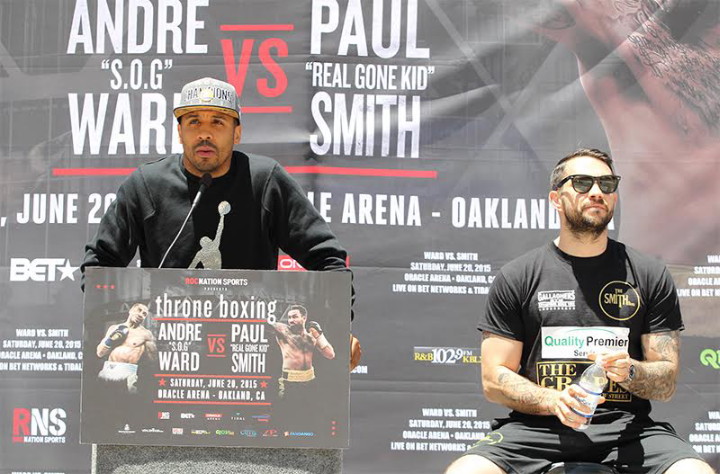 (Photo credit: Tom Hogan – Hoganphotos/Roc Nation Sports) Despite it being his first fight in over a year and a half on Saturday, Andre Ward is in confident mood ahead of his in-ring return against Britain’s Paul Smith, with all signs pointing toward it being nothing but routine business for the American fighter against a man expected to be hopelessly outgunned.

One Brit who Ward was interested in facing once more, is Carl “Will he, Won’t he retire?” Froch – whom the American comprehensively outclassed back in 2011.

Asked why he was fighting Paul Smith on Saturday and not a more noted name, Ward said via The Mail Online;

“Because once again we couldn’t find Carl. I’m talking about Carl Froch. I’m a very straight shooter. I don’t really do the internet thing where I say things and don’t really mean it.”

“I get nothing out of fighting Carl. I’ve already beat Carl – but at the same time he’s been talking as if he wants that rematch, to avenge that loss.”

He’s also been saying he was entertaining the idea of fighting Gennady Golovkin alongside calling out long-retired Hall of Famer Joe Calzaghe – inviting the Welsh legend for “A straightener”.

Offering some insight into behind the scenes “talks” between teams when he spoke separately to Sky Sports, Ward further said;

“I was open to it (rematch) a couple of months ago when the WBA mandated we speak. I don’t know what happened with that. It went from fighting at Wembley to fighting in Nottingham. I can give but I can’t give everything. To me that was answer. He doesn’t want to fight me and that’s fine.”

In fairness, Ward rarely likes to venture beyond his own Oakland backyard himself, yet on this occasion, it seems he was prepared to concede and come to the UK. No doubt bolstered by how easily he beat Froch the first time.

In his Mail chat, he elaborated a little further;

“We were kind of forced to cross paths again – and all of a sudden he disappeared. He started to make these crazy mandates where he wanted me to come to Nottingham to a 45,000 seat arena.”

“That’s nothing against Nottingham but if I come to the UK and risk everything coming over there, I want it to be for the biggest prize at the biggest stadium – and that is Wembley.”

Ward isn’t wrong. How was it good enough for Carl to knock George Groves out in front of 80k there but not rematch Ward in the same venue? Smells fishy.

“So, I didn’t understand why it made sense to go to Nottingham (Froch’s hometown) It’s just 45,000 seats. I think Carl Froch should show a little bit more respect to all the fans in the UK – don’t just limit it to Nottingham – give all the fans a chance to come and support a fight of that magnitude.”

As for Smith, Wards opponent on Saturday – he seems to be being overshadowed a little in the build up. And Ward insists it is the Liverpool man and not Froch, who is the object of his current focus;

“Once Paul Smith came into the equation – that’s all I’m worried about. I’m not concerned about Carl Froch, I’m just not. If there is a situation where we have to face each other, then I’ll cross that bridge.”

I very much doubt it will happen. Froch is getting comfy in retirement and hasn’t boxed in over a year. He’s rich, he has another child on the way and the Queen just made him an MBE.

Something to tell Mayweather about the next time he’s embarrassingly fawning all over him live on air!