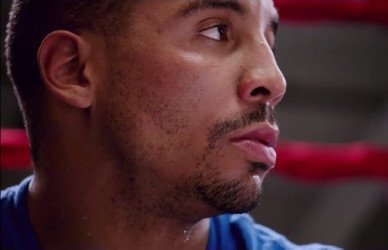 Andre Ward (27-0, 14 KOs) will be making his long awaited ring return on Saturday in a catch-weight fight at 172 pounds against Paul Smith (35-5, 20 KOs) in Ward’s hometown in Oakland, California from the Oracle Arena. While some boxing fans think the 32-year-old Smith is unworthy of facing Ward, it’s not really a big deal.

Ward’s WBA super middleweight title won’t be on the line because of the fight taking place at a catch-weight of 172 in the light heavyweight division. Smith is coming into the fight for the payday, and of course with the hope that he can somehow pull off a big upset against the rusty Ward.

Smith realizes that he’s not going to have much of a chance of beating Ward if he comes out and tries to box with him on Saturday. That’s why Smith is counting on landing some big shots, hurting Ward, and then taking him out. Ward has been on the canvas once before during his career against a lesser puncher than Smith in Darnell Boone. If a guy like Boone was able to hurt Ward, then Smith has a decent chance of doing the same if he can land the perfect shot against the rusty Ward.

At this point, Ward says he still wants to fight at super middleweight despite asking for the fight to take place over the limit. However, the bigger fights for Ward are in the light heavyweight division right now against the likes of Sergey Kovalev, Adonis Stevenson and eventually Artur Beterbiev. At 168, Ward will probably be avoided by the top fighters in that weight class, and it’ll be lucky if Ward gets any of the fighters to face him until he starts showing signs of deterioration with his skills.

The advantage for Ward in staying at 168 is he can pretty much guarantee that he’ll stay unbeaten for a long time, and will get good paydays each time he defends his WBA title against the top 15 contenders. But it’s not realistic to assume that Ward will be involved in any big fights in the future in that weight class.

The only way Ward will get a big fight is if he moves up to 175 to face the likes of Kovalev, Stevenson, Jean Pascal and Beterbiev. Thus far, Ward has shown little interest in moving up to 175. Some boxing fans think that Ward is afraid of losing, and that’s why they see him as reluctant to move up to 175 for occasional good paydays against Kovalev, Stevenson and Pascal. They don’t understand why Ward wouldn’t want to move up to light heavyweight just for the occasional big money fights. These fans think Ward is afraid of getting knocked out by the big punchers at 175. It’s hard to say what’s keeping Ward from wanting to move up in weight seven pounds for bigger paydays.