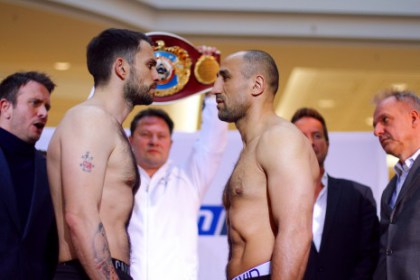 It’s been 6 months since the absorbing first bout was marred by some confusing scorecards and in the case of Fernando Laguna’s 119-109 sheet – comical. But, the right decision has been arrived upon and the challenger aims to take full advantage.

“I always thought that this rematch would come. I would be lying if I didn’t think that it might not come off for one reason or another, the only doubt I had really was that he wouldn’t want the fight as he knows that he was in a hard and close fight.

“I know that everyone here wants him to fight Sturm, they are all looking at that as a big summer fight, so I am here to crash the party and take this chance that one or two people doubted I would get and prove I belong here.” Smith said.

The truth of the matter is, without Laguna’s ridiculous assessment of events the fight would not be happening and in that regard it’s a blessing in disguise. That’s not to say Smith doesn’t deserve it, he absolutely does and put up a career best performance in the first fight.

However, regardless of whether you felt he won the first outing or not, you could not have argued with a narrow Abraham win. If that had been the case, Smith would not be in Berlin, something that he is in agreement with.

“I think had that one card not been so out of line with the others then maybe I would have been defending my British title and looking at getting a European title shot or looking at facing Anthony or Andre Dirrell for a World title, the fights would have been there for me because I proved myself at World level in the first fight.” He said.

Smith sentiments are consistent with the mantra that has emanated from the camp ever since tonight’s justified rematch was announced.

‘Last time we believed, this time we know’.

Paul Smith proved that he is not the same fighter who was decisively beaten by James DeGale and George Groves. He proved he is a renewed fighter with the backing of Joe Gallagher and the encouragement of a buoyant gym, which includes his brother Stephen, Liam and Callum.

He proved that he can handle world level and firmly believes he is coming to rip the title from Arthur Abraham and according to Joe Gallagher doesn’t intend to leave it too the judges this time.

“We have a game plan of course but there has to be more thrust and guns blazing this time because it’s win or bust.” Gallagher said.

I am skeptical when I hear Joe Gallagher talk about Smith going for the knock out, it seems like some sort of pre fight tactic to unsettle the champion and not in keeping with anything we have seen from the Manchester trainer before.

Stylistically, I don’t see much change from the first fight, Abraham will fight in spurts and Smith will look to outwork the classy Armenian when he takes his break and covers up with his high guard against the ropes.

Reading between the lines, I would be more inclined to expect Smith to put his foot on the gas earlier and try and win the early rounds, which cost him big last time. If he can do that and as suggested Abraham is not physically what he once was he has a huge chance of executing his game plan to outwork him late.

Ominously, Arthur Abraham unlike the last fight has made weight with ease and is already talking about fighting Felix Sturm in the summer.

Regardless of conditioning and future plans, Smith is convinced that Abraham will not bring anything different to the fight and looks confident and relaxed ahead of the biggest night of his life.

It has all the makings of an intriguing fight and one that Paul Smith this time KNOWS he can win.