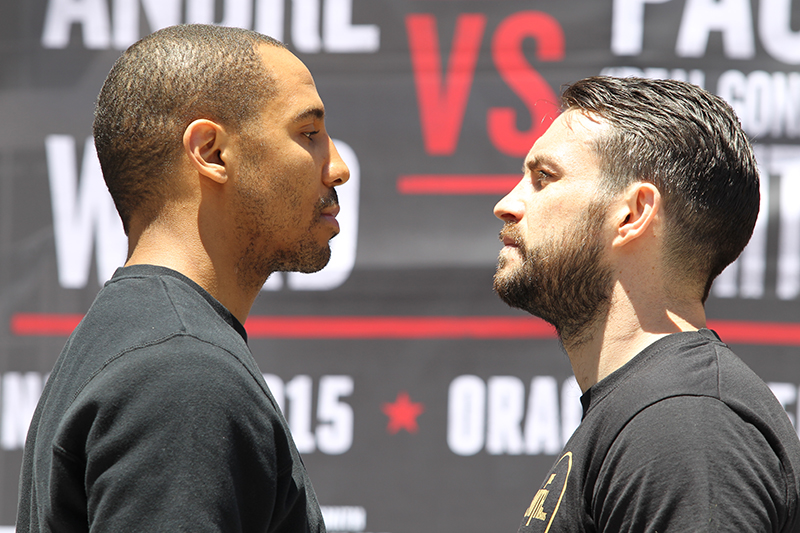 (Photo credit: Tom Hogan – Hoganphotos) Former P4P boss Andre Ward – removed from most lists through his 19 months of inactivity – is keen to make a statement on Saturday night when he fights Britain’s Paul Smith in his Oakland backyard, insisting to Sky Sports – who are screening the bout – that he is out to tell the world he is back.

It’s a monumental task that the Liverpool fighter is facing – irrespective of Ward’s inactivity – and the former 168 lb world title challenger will further be hindered by the 172 lb catch-weight insisted on by the American.

Smith is not massive at 168 lb by any stretch and consensus seems to be this will be a crucial factor in Ward being able to secure the stoppage he has been promising the press.

“Like always I’ve prepared like I’m supposed to prepare. Every round I’ve sparred, every mile I’ve run. I left my family, like I always do and I am ready for this coming Saturday night.”

As for Smith, he has promised fans that he is not just turning up to get beat, telling iFLtv that notion was ‘bol***** ‘ – and that both he and trainer Joe Gallagher have devised a number of strategies they hope will neutralise the effectiveness of the American.

He is still, however, realistic and displays a refreshing honesty;

It will be an upset of staggering proportions should Smith pull it off, yet Ward predictably has other ideas;

“I’m glad my opposition talked before they came over here from the UK. They gave plenty of bold predictions saying what they gonna do and just how they gonna do it.”

“We not only want to win – but we want to put on a tremendous performance and tell the people that Andre Ward is back.”

It remains to be seen whether Ward will return to 168 lb after this fight or indeed move up – as widely expected – and look for fights against the top guys at 175 lbs – notably Kovalev, Stevenson and Jurgen Braehmer.

Either way – I wouldn’t bet on an upset on Saturday – as much as the British fans would love one. The “S.O.G” merely needs to get this fight ‘out of the way’.

I expect Ward to be too smart, too fast, too strong and too skilled for Smith – and seek to get him out of there in the final 1/3 of the fight.

Its on Sky Sports in the UK and BET in the US.