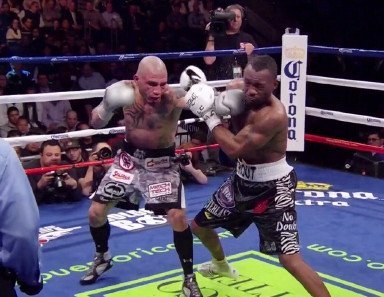 Miguel Cotto is a fighter before a boxer, at least in the way he prefers to press the action. Never backing down and never leaving any room for anyone to question his heart, Cotto is a fan of middle ring action. While the proposed June 7th fight between Miguel Cotto (38-4, 31 KO’s) and WBC middleweight champion Sergio Martinez (51-2-2, 28 KO’s) still hasn’t been negotiated, Roy Jones Jr. chimed in on his thoughts about the fight anyway. He sees the fight coming down to a couple of things.

If Sergio boxes Cotto, then his chances of success increase dramatically. But if Cotto is able to turn the fight into an inside war like he did in his last fight against fringe junior middleweight contender Delvin Rodriguez then that gives Cotto an excellent chance of beating the soon to be 39-year-old Sergio. Miguel Cotto (31-4, 31 KO’s) may have lost two out of his last three fights but that’s not stopping Golden Boy Promotions from offering him huge money to fight their young star Saul “Canelo” Alvarez (42-1-1, 30 KO’s). Golden Boy CEO Richard Schaefer met with Cotto this week at Golden Boy headquarters and offered Cotto more than $10 million for him to fight the 23-year-old Canelo. Schaefer also mentioned a possible fight for Cotto against Floyd Mayweather Jr. if he agrees to the Canelo fight.

Instead of readily agreeing to the deal, Cotto reportedly said he would think it over. He’s interested in fighting WBC middleweight champion Sergio Martinez in order to try and capture a 4th division world title, and that would give Cotto the opportunity of realizing his dreams. Former WBA light middleweight champion Saul “Canelo” Alvarez (42-1-1 30 KO’s) said earlier today that he plans on fighting three times in 2014 with all three fights being on pay-per-view. Canelo will be fighting on on the following dates: March 8th, July 26th and November 22nd. His promoter Richard Schaefer says he plans on seeing if he can arrange a fight between Canelo and Miguel Cotto or Sergio Martinez. But if neither of those fights can be made, Schaefer will be looking at matching Canelo against IBF light middleweight champion Carlos Molina.

Canelo said on his twitter, “After my meeting with GBP these are the dates that will fight in 2014: March 8, 26 in July and 22 November. My three dates will be on PPV and the first opponent of March 8 will be announced in the coming weeks!” Abel Sanchez, the trainer for WBA middleweight champion Gennady Golovkin, thinks that Golovkin should be in the running for a fight against Floyd Mayweather Jr. and/or Miguel Cotto. Golovkin has a fight next month on November 2nd against contender Curtis Stevens, but Sanchez figures that’ll be an easy fight for Golovkin.

Once Stevens is out of the way, Sanchez wants Golovkin to face Mayweather or Cotto. He believes that Golovkin can down to 154 to face either of them as long as he has a full 8 week training camp to trim down.

Sanchez said to RingTV “Gennedy came into camp weighing 167 before training, so it would be just a matter of getting enough time to get down to 154…we would start losing some of the weight that we have to earlier…it’s just a matter of having the time to do it.”