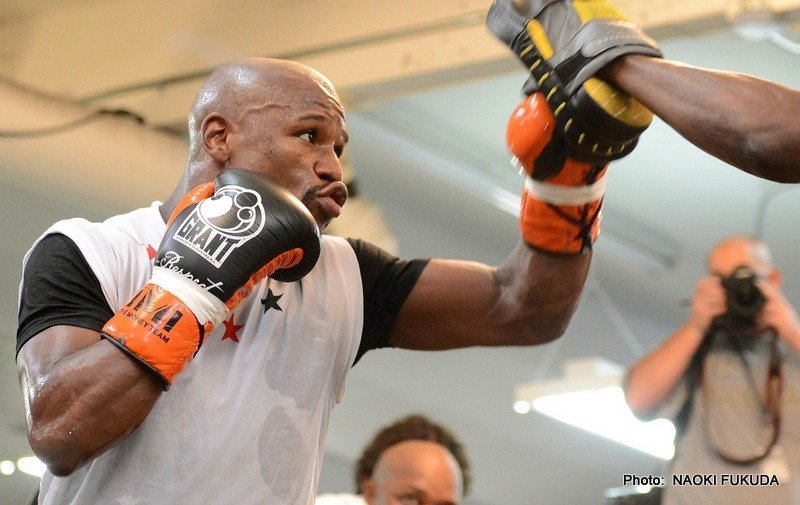 Floyd Mayweather Jr. has been in the sport of boxing going on 18 years now but has been boxing all his life. He has fought in multiple weight classes against many fighters who will one day be inducted into the hall of fame. He is widely considered to be the pound for pound king of boxing. Floyd was asked about what he thought about Bernard Hopkins calling him out to face off in the ring, and he believes that everyone is trying to hit the jackpot and fight him. He is highest paid athlete in the sport and make no mistake everyone in the sport wants the opportunity to dethrone the king.

Mayweather is very conscious of this which is why he trains the way he does. He makes it known that he never overlooks an opponent. Every person he faces in that squared circle has the potential to destroy his plans of becoming the best to ever lace up the gloves. People who have seen Mayweather train say that he trains like a man who hasn’t made a dime yet, even though his career has earned him hundreds of millions. He acknowledges that all the young stars want to be in his current position so they are coming full force to knock his head off.

Marcos Maidana is the next person up to get his chance at dethroning Mayweather. Maidana is a hard puncher who comes straight forward hoping to land his biggest punch on Mayweather’s chin. If Maiadan could land that punch the landscape of boxing would change drastically. If Mayweather was to make the same mistake of underestimating Maidana he could suffer the same fate as Adrien Broner. Broner went into the Maidana fight thinking it would be an easy night, he was sadly mistaken. The thing the boxing public should know is that Floyd is no Adrien Broner, he has been at the top for many years.

It’s easy to get complacent once you reach a pinnacle in the sport that Floyd has reached. The hunger that you had to earn more recognition or more money to feed your family has decreased once you make it to the top of the sport. Mayweather definitely loves his money but what really drives him is his quest to become “The Best Ever” athlete not just boxer. When Floyd leaves the sport he wants to make sure he stands out in history. He wants to accomplish things that no other person has done or will be able to do. Floyd Mayweather Jr. is well aware that people are gunning for him but he remains the sole heir to the throne.