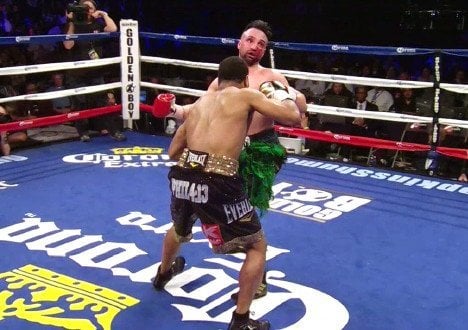 The DC Armory hosted the Bernard Hopkins vs. Beibut Shumenov card where Bernard “The alien” Hopkins made history once again by unifying titles at the the age of 49 years old. He won a split decision over Beibut Shumenov unifying the WBA and IBF titles. Hopkins was the main event but it was Shawn “Showtime” Porter 24-0-1 (14KOs) who won over the crowd.

Porter made his first title defense against the king of Brooklyn Paulie “Magic Man” Malignaggi 33-6 (7KOs). This fight woke the crowd from the previous fight where middleweight champion Peter Quillin defeated Lukas Konecny, which failed to please fans at the armory.

As the first bell rang both fighters came out ready for combat in the first round trying to take control of the fight early. Malignaggi showed a lot of movement early on causing Porter to find a way in to land punches. Shawn did just that with his relentless attack and bullied Malignaggi around the ring at times.

Once Porter started unleashing his power shots it was clear that they affected Malignaggi, but Malignaggi being the warrior he is fought fire with fire. The crowd loved it as chants for both competitors filled the arena.

Early in the fourth round Malignaggi was dropped by right hand to the head, later on in the same round is when Porter managed to hurt Paulie again and went in for the kill. He had Malignaggi against the ropes and continued to throw wildly until he caught Paulie with a right hook that had Paulie out on his feet.

He continued his attack and finally the referee stepped in as Paulie crumbled to the ground waving the fight off. The crowd exploded in cheers as Porter stomped around the ring claiming his victory. Porter has shown himself to be a threat in the welterweight division because of the hard work he puts into his fights. He is like a unstoppable train in the ring that keeps coming.

Porter is currently still unsigned but after that performance I cant imagine that staying the same. Once he gets the right team behind him Porter has a plethora of options in the very loaded and talented welterweight division.