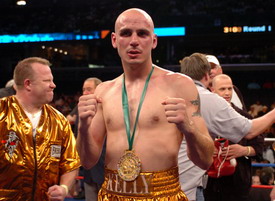 The following are quotes and the press release from Tuesday’s Taylor vs. Pavlik press conference at Tavern on the Green.

Lou DiBella, President, DiBella Entertainment “This is a great fight for Jermain Taylor. This is a great fight for boxing. We are very excited that we could bring this fight to Atlantic City. I have always wanted to promote a fight in Atlantic City and now I have the opportunity to do that. I live in the area and this is my backyard. With a strong urging from Ken Condon, we priced the tickets so that they are affordable for all boxing fans. To get a fight of this magnitude and have the top ticket price at only $400 scaled down to $50, all boxing fans will have the opportunity to watch this great middleweight championship bout.”

“We really wanted to have this fight live on HBO’s World Championship Boxing. We will have a countdown special, just like we would have for a major pay-per-view show. It will debut on September 22nd in prime time and run on consecutive nights through the week. This fight reminds us that this sport is very much alive.”

“This fight reminds us of the 80’s, when we had all of those great middleweight championship fights. This is a great competitive fight between the best two middleweights in the world. This fight is what boxing deserves and this is what boxing will get on September 29.”

“I watched Kelly Pavlik grow up. I saw him when he was an amateur. He and Jermain fought then, and I know he is going to bring it.”

“These are the two middleweights that everyone talks about. This is the fight that people are talking about. Jermain Taylor has the faster hand speed and better coordination. And Kelly is going to be right there the whole time – right in front of him. I predict a knockout. This fight will not go six rounds.”

Emanuel, I can’t get mad at your prediction, you’re supposed to say that. I will take no chances, there is no playing around in this fight. I always put my best into it and I can’t wait until September 29th, and there will be many more after that.

I’m 25, I’ve go the experience also. If he wants to come to fight, that is better for me. This is a great fight for boxing. Styles make fights. I predict a win. I predict pain.

I will exploit all of his bad habits. I can’t tell you what they are right now, because I don’t want to give him any ideas. He has picked up some bad habits along the way, but he has not regressed. Styles make fights. I put my time in and I am hungry and deserved my shot.

I don’t know what my strengths are. I like to fight. People say I have a good chin and I can take a punch.

It is going to be a tactical brawl.

I finally got a man that is not a lefthander, and I am excited about that. I’m a fighter, and I fight until the end of the fight. I give him respect – he is the No. 1 contender. He has proven to be a great fighter and I respect him for that. I expect him to come forward and try to overpower me. He will not run, he is not a southpaw, he is coming to fight. I know he hits hard and I am going to be aggressive.

I will not be defeated. I am the Middleweight Champion of the World.

I don’t remember fighting him – “Coach” told me – I came in and saw him and said ‘I never saw that guy in my life.

He’s going to be looking for a fight – that’s what it’s all about.

“Taylor/Pavlik is a classic middleweight showdown, a true throwback fight,” said DiBella. “The tickets are reasonably priced and are already in high demand with a significant casino presale. Any fight fan wanting to see this historic battle should act fast and purchase their tickets as soon as possible.”

“This is going to be a terrific fight, something that boxing really needs. The eyes of the sporting world will be watching these two great fighters in Atlantic City on Sept. 29,” said Bob Arum, CEO of Top Rank.

Taylor, the favorite son of Arkansas, has successfully defended his middleweight crown against legendary Bernard Hopkins, Winky Wright, Kassim Ouma, and Cory Spinks since first taking the title from Hopkins in 2005.

Taylor (27-0-1, 17 KO’s) has yet to taste defeat since turning professional in 2000. Pavlik, likewise undefeated, gets his first chance at a championship on the heels of a spectacular knockout victory over Edison Miranda. No. 1 rated by both the WBC and WBO, Youngstown, Ohio’s undefeated Pavlik is a bona fide knockout artist, registering 28 KO’s in 31 career triumphs as a professional.

Taylor first captured the undisputed middleweight championship against the legendary Bernard Hopkins on July 17, 2005 at the MGM Grand in Las Vegas, NV, with a 12 round split decision triumph, and defended the title for the first time against Hopkins on December 3, 2005 at Mandalay Bay in Vegas with a unanimous decision victory. Taylor defended his title twice in 2006, first in Memphis in a controversial draw against Winky Wright on June 9, and last December 9 defeating former champion Kassim Ouma in Little Rock. Cory Spinks was next on the Taylor checklist, and Jermain was up to the challenge once again with a unanimous decision triumph in Memphis on May 19, 2007.