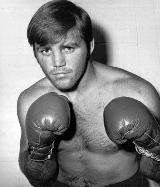 20.07.07 – By Mike Dunn: We are fast approaching the 40th anniversary of the start of the fateful eight-man World Boxing Association (WBA) heavyweight tournament that was employed to determine a successor to Muhammad Ali. On August 5, 1967, the tournament got underway with a doubleheader televised on ABC’s Wide World of Sports featuring former Ali sparring partner Jimmy Ellis against Philadelphia up-and-comer Leotis Martin, and former WBA champ Ernie Terrell, who had recently been hammered in a title match with Ali, against California contender Thad Spencer.

The WBA had recently stripped Ali of the title for refusing to be inducted into the armed forces during the Vietnam War. Ali had been an active, if not a popular champion (his popularity as a pugilist and as a world-renowned figure who transcended his sport did not come until after his comeback in the early 1970s).

In his 3 ½ year reign as champ, Ali had defeated everybody of note in the heavyweight ranks, totally dominating the landscape.

The WBA picked through the contenders and pretenders who remained in the wake of Ali and came up with the eight men most worthy, from the perspective of the WBA brain trust, of wearing the championship belt that had been taken from Ali. The original eight handpicked for the tournament were former champion Floyd Patterson; 1964 Olympic heavyweight champ Joe Frazier; hard-punching, granite-chinned Californian Jerry Quarry; colorful, hard-punching Argentinean Oscar Bonavena; German lefty Karl Mildenberger, who had put up a surprisingly stubborn fight against Ali the previous September; Ellis, who was given little chance of winning; former WBA champ Terrell; and the shifty, highly regarded Spencer.

Former champ Sonny Liston was not invited to the party and neither were rugged Canadian George Chuvalo nor unbeaten Buster Mathis.

Frazier was included as part of the Original Eight but he pulled out to take on Mathis, his nemesis from the Olympic trials, for a limited version of the title in a bout arranged to coincide with the opening of the new Madison Square Garden in March of 1968.

The WBA turned to Leotis Martin to take Frazier’s spot and fill out the eight-man roster. Martin, who would become famous a few years later as the man who knocked Sonny Liston colder than an Arctic prairie, was not that well known outside of the East Coast in the summer of 1967. He was a serious contender, though, a tough brawler tempered through fierce encounters in the Philly gym wars.

Martin, who came into the tournament with a 24-1 mark, the best record of the Chosen Eight, was pitted against Ellis, considered by many to be little more than a blown up middleweight whose main claim to fame was his association with Ali. Ellis’s record was 23-5.

Going into the tournament, the fighters who most boxing people figured to have an edge were Patterson and Terrell. They had the most experience, after all, and the eight-man field was not considered to be overloaded with talent, especially with the departure of the undefeated Frazier.

Terrell, Patterson, Martin and Mildenberger were all favored to win and move on to the semifinals; they all lost.

On that first day, August 5, 1967, at the Astrodome, Ellis removed himself somewhat from the shadow of Ali with an outstanding performance against the tough, game Martin. In a stirring, seesaw battle, Ellis finally prevailed with a 9-round TKO when the ref intervened because of a deep cut inside of Martin’s upper lip. Ellis had rocked Martin and nearly knocked him out in the first round and then had survived Martin’s rally in the middle rounds.Ellis’s win was probably the biggest upset of the first round.

Spencer methodically defeated Terrell, who seemed a shell of his former self in the aftermath of the beating he had endured from Ali six months earlier in the very same ring. Spencer used a sneaky right hand lead to keep Terrell off balance and maintained a steady body attack en route to a convincing 12-round decision.

Mildenberger was expected to handle the hard charging, awkward Bonavena but it didn’t turn out that way. Bonavena had too much firepower, knocking down Mildenberger four times while earning a lopsided decision on Mildenberger’s home turf.

The battle waged between Quarry and Patterson was by far the closest of the first round of tournament bouts. Quarry built up a big early lead, knocking down Patterson late in the second and fourth rounds during exchanges where Quarry was backed against the ropes and used his counter-punching skills to land solidly to Patterson’s chin.

Quarry tired in the later rounds as Patterson came on. Floyd battled gamely but, as it turned out, futilely. After 12 rounds, the scoring was razor thin. Referee Vern Bybee ruled a draw, 6-6 in rounds. But the two judges, Lee Grossman and Joey Lomas, both gave Quarry a one-point edge in the scoring. The early knockdowns were the difference.

The four survivors advanced to the tournament semifinals with Ellis taking on Bonavena in December in Louisville, Ky. and Quarry and Spencer meeting in Oakland in early February of ’68.

Bonavena and Spencer were the two favorites; once again, the favorites were defeated.

Probably the biggest upset of the tournament was Ellis’s convincing win over Bonavena. The flamboyant South American was so confident of victory that he was willing to come to Louisville, Ellis’s hometown. He expected an easy victory, claiming that he would KO Ellis in 2 rounds and try not to hurt him too bad.

Ellis, buoyed by the presence of Angelo Dundee in his corner and brimming with a quiet confidence of his own in the wake of his KO of Martin, hammered Bonavena, beating him more convincingly than either Ali or Frazier. Bonavena, over-confident and somewhat careless, walked into one of Ellis’s stiff right hands in the fourth round and tasted the canvas for the first time in his career. Bonavena, behind in the scoring and attempting to make a late push, left himself open and was nailed again in the 10th and went to his knees. It was academic after that.

Quarry also turned in an impressive performance, the best of his early career. Spencer helped. After his decision over Terrell, Spencer vaulted to No. 1 in the rankings and was expected to win the tournament and ascend to the WBA throne. It didn’t happen. Spencer, like Bonavena, was over-confident and it cost him.

Spencer, mimicking Ali, bragged to ABC commentator Howard Cosell before the fight that he would dominate Quarry. Instead, Quarry tagged Spencer with a hellacious right just 30 seconds into the opening round and Spencer had to hold on to keep from going down. It was an omen of things to come. In the third round, Quarry shook Spencer like a palm tree in a stiff wind with a one-two combination. In the fourth, he put Spencer on the mat with a vicious left hook. In the 10th, Quarry knocked Spencer through the ropes with a counter right near the end of the round. In the 12th round, Quarry nailed Spencer with a hard right, forcing referee Jack Downey to stop the fight and rescue Spencer with just seconds left before the final bell.

The two fighters who were the longest of the long shots going into the tournament were now the only ones left standing: Ellis and Quarry. Both staged impressive upsets in the semifinals. Quarry’s win was deemed a bit more impressive in the eyes of the experts and he was picked as the favorite.

The title bout was scheduled for April 27, 1968, at the Oakland Coliseum, the same ring where Quarry had destroyed Spencer.

The Ellis-Quarry bout was a tactical masterpiece for Ellis but a total dud of a fight. Ellis, employing the strategy mapped for him by Dundee, wouldn’t give Quarry the opportunity to counter punch. Ellis kept Quarry in the center of the ring and nailed him frequently with quick right-hand leads. Quarry was too young and inexperienced at that point in his career to adapt to Ellis’s frustrating style. Quarry was so exasperated at times during the course of the 15-round affair that he threw his arms in the air and practically begged Ellis to come at him. It was all for naught.

Quarry, who later claimed to have a bad back going into the fight, disappointed himself and his legion of loyal fans with his lackluster performance. Ellis got the decision and the championship belt, though the scoring was out of the realm of what Bizzy of The Ring would refer to as “the gray area.” Referee Elmer Costa gave Ellis a 10-5 nod in rounds, which was pretty accurate. Judge Fred Apostoli called it 7-5-3 for Ellis and judge Rudy Ortego amazingly had it a draw, 6-6-3. If Apostoli had called the 15th round for Quarry, as Costa and Ortega had, the bout would have been a draw.

There was a feeling that he would hold the WBA title only as long as it took to make a fight with Frazier, who had dismantled Mathis in New York the month before, and that was one prophecy that proved to be accurate.

Ellis successfully defended the WBA title once, earning a controversial 15-round decision over Patterson in Sweden in September of ’68. In February of 1970, he finally faced Frazier in a heavyweight unification bout and succumbed to Frazier’s heavy fists in five rounds. The WBA title was passed to the hands of Frazier, who became the REAL champion in everyone’s eyes when he decisioned Ali in March of 1971.

The WBA was a forerunner to the alphabet organizations that dominate and manipulate the sport of boxing these days. In that regard, the legacy of the WBA is a poor one indeed.

The WBA tourney, though, did have some positive side effects. It introduced Quarry to the boxing world, for one. The iron-chinned, iron-willed Irishman would be among the top contenders in the heavyweight ranks for many years, famously losing the ones that counted the most but beating many of the top names along the way, usually on network TV. Quarry developed a huge following and, after the dismal Ellis defeat, was never boring.

Another positive impact of the WBA tourney was the ascendance of Ellis, a decent fighter and a good man who made the most of the once-in-a-lifetime opportunity that was laid at his feet after Ali was stripped of the crown.

The tournament also helped to create realignment in the heavyweight division. Terrell, Mildenberger and Patterson were now officially part of the past, though Floyd would gamely battle on for a few more years. The handsome, loquacious Spencer, who seemed at one point to be Ali’s heir apparent, would never recover from the devastating loss to Quarry. The colorful Bonavena, like Quarry, would remain among the top tier of heavyweights for a while to come yet, though he, too, would have trouble winning the big one.

Frazier, who didn’t participate in the tourney, turned out to be the biggest benefactor of all. He toppled Mathis and then pounded Ellis to place himself on the throne awaiting the return of Ali. Cream rises to the top and the WBA heavyweight tourney of 1967-68 helped greatly in the sorting process.

Mike Dunn is a writer and boxing historian who resides in Gaylord, Mich.

Next post: Vassiliy Jirov Interview: “Kenny and I didn’t hold a grudge against each other. Thank Darnell for the kind words!”