Vassiliy Jirov Interview: “Kenny and I didn’t hold a grudge against each other. Thank Darnell for the kind words!” 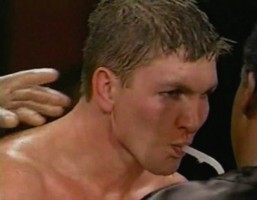 20.07.07 – By Izyaslav “Slava” Koza: Fresh off his comeback win over Kenny Craven, I spoke to Vassiliy about this as well as a few other current issues.

ESB: Hey, Vassiliy, been a while. Happy with the fight?

Vassiliy Jirov: Yeah, went as planned, and I was well prepared. Saw a few tapes on him and that was enough to figure him out. I was also happy that Craven and I spoke after the fight, didn’t hold a grudge against each other, and parted on good terms. I am extremely happy that it ended like that.

ESB: I know I can call Thell and ask, but I wanted to know what he told you regarding the fight?

Vassiliy Jirov: He told me I fought correctly. We understand though that we should go higher, and that this is just the first stop to a title fight, and that Kenny helped us a lot. Our next opponent will probably be a journey type and then we will try to target Hill.

ESB: A few days ago Craven’s corner-man wrote an article claiming you fought dirty. How would you respond to that?

Vassiliy Jirov: Well, he has a right to his opinion, but in reality, the way Kenny came at me is the way I had to fight in return. I don’t judge and don’t really know what to say here. Whatever happened, happened, and as I said Kenny and I didn’t have any issues after the fight.

ESB: I spoke to Darnell Wilson recently, and he congratulated you with the win, and respects you just as a fan of the sport. Of course, as a fighter he wants to see you in the ring in an eliminator or a unification bout. Do you know him? See any of his fights?

Vassiliy Jirov: If there is a demand from the public to see it, and the fight is picked up by one of the major networks, I don’t see a problem with it. If there is a demand from an audience then, yeah, because they buy the tickets to the fights they like. Other than that, I want to thank him for the kind word. I might have seen his fights but I just can’t remember right now.

ESB: Any details about negotiations with Hill?

Vassiliy Jirov: Right now we have a working dialogue but Thell could give you more information regarding the details.

ESB: Anything to add in conclusion?

Vassiliy Jirov: All’s good, and I’m happy with the win. Write that the Tiger has returned to the hunt. There.

ESB: Thanks. Wish you well and we’ll stay in contact.

Boxing News → Vassiliy Jirov Interview: “Kenny and I didn’t hold a grudge against each other. Thank Darnell for the kind words!”