Unbeaten rising star Tim Tszyu rose from an early knockdown before finding his footing and securing an impressive unanimous decision victory in his U.S. debut over U.S. Olympian Terrell Gausha Saturday night live on SHOWTIME from The Armory in Minneapolis headlining a Premier Boxing Champions event.

The son of Hall of Famer Kostya Tszyu, Tim Tszyu (21-0, 15 KOs) faced adversity early  as Gausha (22-3-1, 11 KOs) landed a perfect straight right hand that sent Tszyu toppling to the mat in the opening round. Tszyu bounced back onto his feet but was sporting a cut under his left eye for the remainder of the frame. The flash knockdown didn’t deter Tszyu, who used his physicality, aggressive and come-forward style to punish Gausha to the head and body on his way to a victory by scores of 116-111, 115-112 and 114-113.

“It was all so quick,” said Tszyu of the knockdown. “It was good that I faced adversity for the first time and I was able to come back. All respect to my opponent, Terrell Gausha. He’s a hell of a warrior and he’s a true gentleman. It was a simple flash knockdown. It was perfect timing. He’s a former Olympian. He’s got great credentials. That’s a great lesson for myself. I got back up and I dug deep.”

“I felt that I had him in trouble after the knockdown,” said Gausha. “I tried to jump on him but he’s a tough fighter. I take my hat off to him. He came prepared. I was ready for 12 hard rounds too. I think I got a little too excited and I tried to jump on him. But he was in shape so he recovered pretty good. He just pressed the action. That’s what he does. I knew he was going to come like that, and we trained hard for that.”

Gausha had success with that same straight right hand throughout the fight, but Tszyu’s constant pressure slowly began to wear Gausha down, first hurting him with body shots in round four. Tszyu followed that up in round five by hurting Gausha with an overhand right that forced Gausha to look to hold throughout the rest of the round.

“I hope we gave the fans a great show,” said Gausha. “I trained hard. I poured my heart out. I’m happy with it. I hate losing but I went out like a champion.”

A native of Rockdale, Australia, Tszyu was able to stay in control with a relentless body attack, landing 93 body shots compared to 29 from Gausha, according to CompuBox. Tszyu stayed close to Gausha throughout the action, eating the occasional counter right hand in order to land his 207 power punches, which outpaced Gausha’s 106. In addition to his edge in punch output, Tszyu was more accurate, landing 32% of his shots compared to 28% for Gausha.

“I was just enjoying myself,” said Tszyu. “I felt in control the whole time. I kept the pressure on. I wasn’t going to back down. He kept landing shots but I said, ‘I’m going to keep coming forward and keep fighting.’ I kept my composure but I just kept saying to myself that this is a new round. I have to dig deep and I have to catch up here. I felt like I did that. I put the pressure on. I didn’t take one step backwards. I kept going on.”

Gausha remained game until the last bell, landing enough shots to keep Tszyu from overwhelming him, but was not able to turn the tide on the judges’ cards. After a victorious debut on the U.S. stage, Tszyu set his eyes on the winner of the upcoming undisputed super welterweight championship rematch between Jermell Charlo and Brian Castaño taking place May 14 on SHOWTIME. 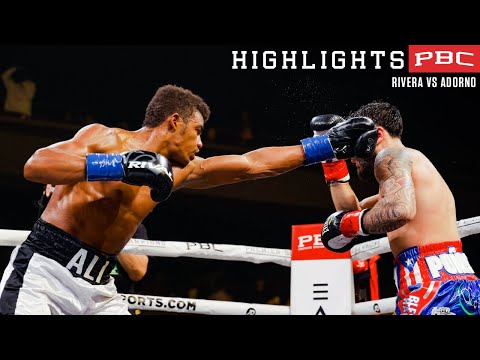 The bout was tense throughout, with neither fighter able to fully control the action or significantly hurt their opponent. Rivera’s jab was the key to his success, as he landed 72 to Adorno’s 30 across the 10 rounds.

“That was four months of practicing in camp,” said Rivera. “I feel so good. I was looking for the knockout, but that undefeated guy is tough. I know him. He’s a power-puncher, but the aggression that ‘Ali’ has is too much. I have a good corner. A great trainer in Herman Caicedo and also Jukka Toivola. But I have talent and I made the sacrifice.”

Adorno looked to load up on power hooks in hopes of slowing down Rivera, but was unable to find the right punch to fully turn the tide in his favor. Rivera appeared to make a key adjustment during the fight, sliding close to Adorno as he loaded up for that hook, smothering the incoming assault and dulling its impact.

Rivera was consistent with the jab, throwing at least 30 in every round, on his way to a 104 to 67 overall edge in total punches landed. He also held Adorno to a 20% connect rate on his 330 punches and out landed his opponent in all but one round. After 10 rounds, all three judges saw the fight the same, scoring the action 97-93 in favor of Rivera.

“I thought it was a closer fight,” said Adorno. “I thought I won seven rounds. All he did was throw jabs.  What the judges didn’t take into account was my activity and productivity. If you look at the fight closely, you will see that I hit him more times than he hit me.”

“Everybody now knows me,” said Rivera. “I say that I am the reincarnation of Muhammad Ali because I work so hard. I’m definitely ready for a world title shot.”

In the telecast opener, super lightweight contender Elvis Rodriguez (13-1-1, 12 KOs) scored a seventh-round knockout over Argentina’s Juan Velasco (23-3, 14 KOs), dropping him three times in the round to finish the fight.

“I wasn’t surprised that I was able to dominate this fight,” said Rodriguez. “I was ready to demonstrate my skills with all of these fans here. I trained really well because I knew that Velasco was going to be a tough opponent.”

After a knockout victory in November, Rodriguez returned to action Saturday night and controlled the pace from the outset, circling his opponent and peppering him with combos from the southpaw stance. As Velasco continued to push forward, Rodriguez was able to slow his opponent’s counters with a consistent body attack, landing 42 times to the body over the seven rounds.

The Dominican Rodriguez used a prolific output of power punches to open up a cut and swelling around Velasco’s left eye, which Velasco told his corner was inhibiting his vision between rounds six and seven. Rodriguez landed 97 power punches in the fight at an impressive 63% connect rate.

“In the beginning of the fight, I started feinting and I was moving around a lot,” said Rodriguez. “But when I started making the combinations, I saw that it was hurting him so I kept with the power punches.”

Sensing his advantage, Rodriguez pressed forward early in round seven and put Velasco down hard early in the frame. He remained patient with his follow-up attack, eventually finding a spot for a sweeping right hook that scored him his second knockdown of the round. With one more flurry, and with Velasco unable to keep him at bay, Rodriguez delivered a left hand that put him down a third time, eventually prompting referee Gary Ritter to waive off the bout 2:49 into the round.

“The eye bothered me during the fight,” said Velasco. “The outcome was more because of fatigue than being hurt. I’ll talk to my family next before I decide what my future holds.”

“I thought the fight was going to be over after I first knocked him down,” said Rodriguez. “But he did surprise me because he came back in that round. I just covered myself well for the remainder of that round and tried to take him out. I knew that he was having trouble with his eye. I could see that he was cut on the left eye and was also bleeding from his nose.

“I’m ready for anybody at 140 pounds. Gervonta Davis, Rolly Romero, whoever. I’m ready and prepared.”

The event was promoted by TGB Promotions, No Limit Boxing and Warriors Boxing. 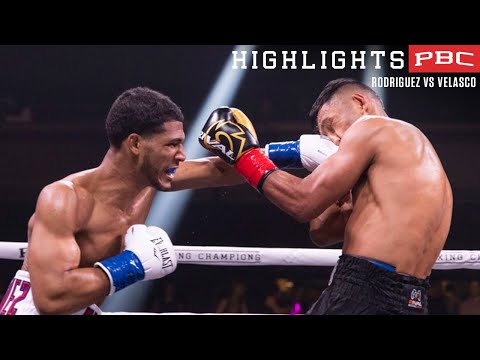