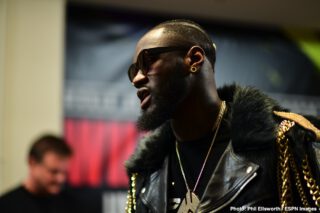 Deontay Wilder the heavy handed American slugger got lucky last night as he got a win on his record against Audley Harrison. Bizarrely, A-Force finds himself at the hands of … Read more

The first half of the fight saw an interesting contest with the shorter Toney starting positively looking to attack Browne with Browne using his range to set up power shot opportunities. Toney caught Browne with some good right hands in round five while Browne used his jab to great effect to keep Toney at bay for the most part of each round, to rack up points with the judges. Browne’s heavy hands always seemed to look threatening but the Australian respected Toney’s defensive nous and opted against being overly aggressive.

The second half of the fight saw Browne continue to use his size to control the smaller Toney whilst Toney reduced his offensive output which saw Browne take the later rounds to record a 117-111, 119-109 and 120-108 victory on the three judge’s scorecards. Fighting with an injured left hand from the 8th round, WBC middleweight champion Sergio Martinez (51-2-2, 28 KO’s) had to battle a lot harder than many boxing fans expected him to in beating Martin Murray (25-1-1, 11 KOs) by a 12 round unanimous decision tonight in front of a huge crowd of 50,000 at the Club Atlético Vélez Sarsfield in Buenos Aires, Argentina.

Murray might have won the fight if he had come out of his defensive shell more often in the fight, as he seemed to adopt the same approach that Saul “Canelo” Alvarez used in his recent fight with Austin Trout in not throwing many punches but counting on his cleaner landing shots to make up the difference for him getting hit a lot more.

Murray could have won but he wasn’t throwing enough and he kept getting nailed by jabs and straight left hands over and over again. Murray was able to block a lot of the shots because he was keeping his gloves high protecting his head, but when one fighter is seen hitting the other all night long on the gloves, it doesn’t matter that a lot of the shots were blocked. Martinez was the busier guy and he deserved the victory. The judges scored it 115-112, 115-112 and 115-112.