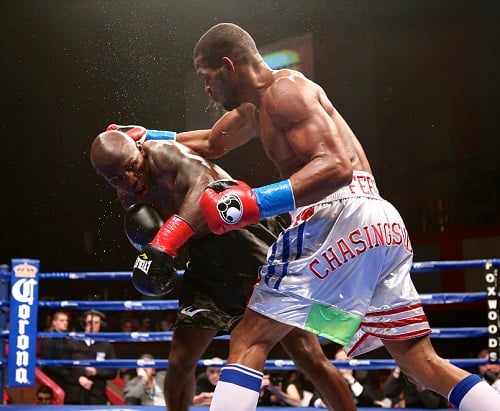 The 5’9 Naazim Richardson trained Dargan took the first round as Luis fell short with most of punches following his rangier opponent around.

The fight changed in the last minute of the second as Dargan stayed on the ropes. Nothing serious connected and the more effective punches of Dargan carried the round but the geography of the battle had been set.

The 5’7 Luis kept it in the trenches. He came out aggressively in the third and was unfortunate not to be rewarded with a two point round fifteen seconds in when a left hook landed on the retreating Dargan. The fighters tangled as Luis stepped in and Dargan was down.

It was one way from there. Luis got stronger as the fight went on, often doubling and tripling his hooks up and down. He squared up inside but took the uppercut away, spinning Dargan and controlling the tempo, not giving him any room to land anything with power.

Dargan got some space in round seven. For about a minute and a half. In round eight Dargan turned away twenty seconds left with an eye injury after a clash of heads. The ninth was a tremendous Luis round. In the tenth Dargan caught Luis with some shots but a knockdown from a left hook sealed it.

On the undercard, ex Cuban amateur star Sullivan Barrera (15-0, 10 kos) stopped former IBF 168 pound champion Jeff Lacy (27-6, 18 kos) in round four. It was sad to see. Lacy was decked by a right hand after a minute and a half and he didn’t need to take the punishment he did. It should have been stopped before the first bell. There was only going to be one result. The fight was stopped at 2.05 of the fourth with Lacy in a corner taking right hands. The 37 year old Floridian should be retired.