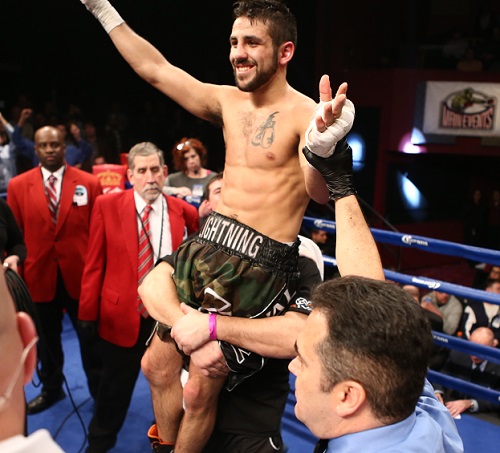 The first round started slow with both fighters feeling each other out. Luis appeared to control the second round keeping Dynamite on the ropes. Dargan was down in the third and the referee ruled it a slip. Luis continued to be the aggressor in the fourth. Dargan began to return fire late in the fourth and Luis thew a punch after the bell that enraged Dynamite.

Tony continued to throw bunches of punches to start the fifth including an aggressive body attack. In the later rounds Luis continued to be the aggressor keeping Dargan up against the ropes. Dargan suffered an injury to his left eye in eighth round but the doctor deemed him okay to continue to the ninth round.

Dynamite landed a hard shot in the tenth but Luis countered and knocked down Dargan. He managed to finish the fight but, unfortunately, the cards were not in his favor. Tony Luis won via unanimous decision with the final score 97-92, 99-90 and 97-92 and handed Dynamite his first career loss.

In the middle fight of the telecast, Cuban sensation Sullivan Barrera (15-0, 10 KOs) stopped veteran Jeff “Left Hook” Lacy (27-6 18 KOs). Barrera knocked Lacy to the canvas in the first round but he managed to recover and finish the round.

Both fighters settled in by the third round. However, it was short lived because in the fourth round Lacy could no longer withstand Barrera’s attack and the referee stopped the fight with Lacy still on his feet.

The live ESPN2 Friday Night Fights telecast began with an eight round battle for the New England Middleweight Championship between Thomas “The Souljah” Falowo (13-3, 8 KOs) of Pawtucket, Rhode Island and Russell “The Haitian Sensation” Lamour (11-1, 5 KOs) of Portland Maine. The Foxwoods’ crowd was fired up from the beginning for this local showdown. These fighters were not strangers as they had faced each other several times as amateurs. They took no time to feel each other out and came out swinging from the first bell.

Falowo, who only has one amateur win against Lamour, was clearly the aggressor in the early rounds. By the sixth round, Falowo started to tire and Lamour took advantage of his fatigue, but Falowo managed to end strong.

The seventh round was uncharted territory for both competitors. Prior to the fight Falowo said the later rounds would be the difference-maker for him. He continued to put the pressure on Lamour in the seventh round.

In the eighth and final round Falowo looked determined to secure a knockout. By the end of the fight the crowd was on their feet at Foxwoods and Lamour and Falowo were both trading big shots.

Falowo walked away with the unanimous decision victory and the New England Middleweight Championship with scores of 78-74 and 77-75 (twice). He also handed Lamour his first professional defeat and only his second victory over “The Haitian Sensation.”

In the first fight of the night to go the distance, local light heavyweight Charles “The Truth” Foster (7-0, 3 KOs) defeated Washington, DC native Larry Pryor (9-9, 5 KOs) via unanimous decision. The bout was six rounds and the judges scores were: 60-54, 59-55 and 60-54 in favor of Foster.

Middleweights Shane Mosley, Jr. (3-1, 3 KOs) and Rafael “The Penguin” Machado (0-3) were scheduled for four rounds of action. However, Mosley, Jr. knocked down Machado twice in the third before the referee stopped the fight.

Heavyweight Keith “Machine Gun” Tapia (13-0, 8 KOs) of Santurce, Puerto Rico stopped Jesse “Street Fighter” Oltmanns (10-5, 7 KOs) of Bartonsville, PA in the first round in the second bout on the card.

In the first fight of the evening, Philadelphia’s Khalib “Big Foot” Whitmore (6-1, 5 KOs) squared off against Carlos Reyes of Kuarny, AZ (7-5-1, 5 KOs). Reyes knocked Whitmore down twice in the second before the referee called the fight to an end at 56 seconds into the second round handing Whitmore his first career defeat.

In the final bout of the evening, David Wilson (5-0, 1 KO) of New Haven, Connecticut knocked out Michael “The Reason” Rodriguez (0-3) of New York, New York in the final round of the four-round middleweight swing bout.

Cassius Chaney’s bout was cancelled after his scheduled opponent failed a medical exam and a replacement could not be found in time.

*Note: All records have been updated to reflect tonight’s results.