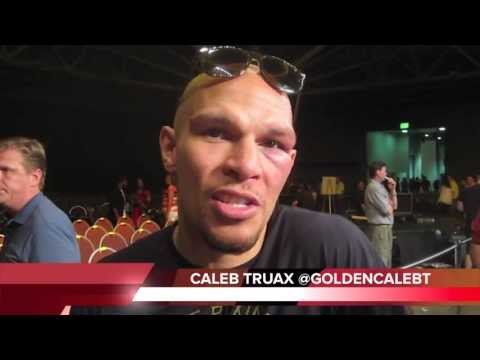 There’s been a bit of a drought in Minnesota when it comes to victories on the big stage. For a while there, it seemed like it would never happen. ESPN2 analyst and famous trainer Teddy Atlas reminded fans right away of that fact. He has a habit of pointing out what he thinks might be padded records. In Caleb “Golden” Truax’s case, Teddy explained that most of Caleb’s victories took place in his own backyard. It wasn’t hard to figure out what he was implying. He further explained that Caleb blew his big chance against Jermain Taylor on 4-20-12 in Biloxi, Mississippi. Except for a ninth round knockdown of Taylor, Caleb was pretty much shutout. Caleb 22-1-1 (13KOs) was determined to not let that bad memory repeat itself.

Caleb managed to get Don “Da Bomb” George 24-3-2 (21KOs) in trouble right away in the first round. Caleb quickly figured out George was not a counter puncher, and didn’t use his legs much for anything other than moving straight ahead. Consequently, Caleb started teeing off. He was using a hard jab to set things up and then pounded in with good three punch combinations. George’s idea of a guard was easily exploited by Caleb. The 29 yr old kid from Osseo, MN didn’t have to rely on his college degree to realise he could slam shots right into George’s guard without retaliation. It was almost as he said to himself, “You let me have that one, well here’s another one. So, he mixed in two or even three right hands, along with his three punch combinations. Soon, Caleb’s right hand bombs started getting through, but George seemed to be weathering things pretty well. Then one in particular, bounced off his noggin. It was followed by a nice left hook that collided with George’s temple. Whoa, now the kid from Chicago was in trouble for sure, and it looked like Caleb might even score a first round knockout. But, as often happens, George was saved by the bell. He made good use of the minute rest, and came out aggressively for the second, surprisingly a lot of folks by actually throwing a jab. Caleb had no trouble avoiding it though, and landing his own hard jab in return. His jab was a hard one that he was stepping into.

In the third round, Caleb was doubling up on the rights, and he started getting through and once again had George wobbling. George just couldn’t figure out how to land anything of his own, as Caleb was managing distance well. He sliped George’s punches, and then made him pay. He was demonstrating his version of “snap away”, nicely stepping back a half-step, just barely out of range to avoid George’s efforts, and then snapping back in with his hard counter punches.

Caleb was looking like a seasoned pro, mixing things up, going to the body just enough to keep George thinking about it. For George, he tried to make that old adage come true, “The best defense is a good offense”. but he wasn’t landing, and Caleb made him pay. Caleb’s hometown crowd was loving it. Most were either on the edge of their chairs or jumping up with cheers of encouragement. The chance with Taylor might have gotten away; but. Caleb was making sure this opportunity was going to be seized.

In the sixth round, Caleb backed George up against the ropes. He was pummeling him with a variety of shots, and George made the mistake of bending his head down and leaving it there long enough for Caleb to land a crunching right hand just behind “Da Bomb’s” left ear. Down he went, and it was obvious to Referee Gary Miezwa that George was finished. He counted to about six, and waived things to an end, and signaled for George’s corner and the doctor to come in to administer to George. In the post fight goings on, George made a remark that he had to get back to 168 lbs., and recover his chin. He obviously didn’t learn the most important lesson, and that’s “Don’t get hit so often!” Six pounds or so wouldn’t have made any difference. Caleb had his number and that was it, and as Robert Blake used to say in Baretta “And that’s the name of that tune!” Now Caleb and Minneaota boxing fans can look forward to bigger and better things.