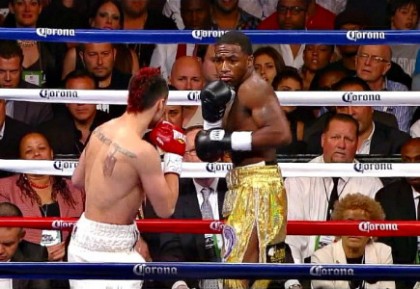 Broner failed to set himself apart from Malignaggi in terms of talent in this fight because he just didn’t work hard enough. He was fighting flat-footed and he didn’t handle Malignaggi’s move or his constant jabs and combinations very well. When Malignaggi would punch, Broner would stop throwing and just try cover up or lean back to pick up punches with the shoulder role. It worked some of the time, but Malignaggi threw so many punches that he was able to get the better of Broner in many rounds. Like I said, I had Malignaggi winning 6 of the rounds.

The referee let Broner get away with a number of fouls in the fight. Broner hit on the break, punched Malignaggi while he had his back turned to Malignaggi, and he also appeared to knee him at one point. Any one of those things could have been called a foul.

Mitchell knocked Banks down with a right hand rabbit punch in the 2nd round. In the 3rd, Banks staggered Mitchell and had him out on his feet. However, Banks stopped punching for the most part and did very little in the remaining rounds outside of a few hard shots in the 8th that staggered Mitchell again.

There was very little action in the fight, as both guys looked like they were afraid to throw punches. It was understandable for Mitchell because each time he was hit hard in this fight he was staggered, but Banks had no excuse.

The crowd was booing off and on for most of the fight, but it failed to motivate either fighter to do much other than jab, hold and throw occasional wild shots.

Mitchell took control over the fight from the 5th round by throwing jabs and mostly smothering Banks on the ropes.

All in all, both of these heavyweights looked horrible and you have to wonder whether Golden Boy Promotions is regretting that they made this the co feature bout. Mitchell looks like he’s going nowhere. He may get a title shot in the future because of his highly inflated ranking but he’s going to get destroyed by either of the Klitschkos. It would be interesting to see how Deontay Wilder would do against Mitchell. I have a feeling that Wilder would knock him out with a single punch in the 1st round because Mitchell’s chin is really suspect.

Periban showed good power, but he faded in the last 8 rounds of the fight after getting off to a good start in the first three rounds. Bika deserved the win because he was the one forcing the fight on Periban and landing the better shots in the last half of the fight.