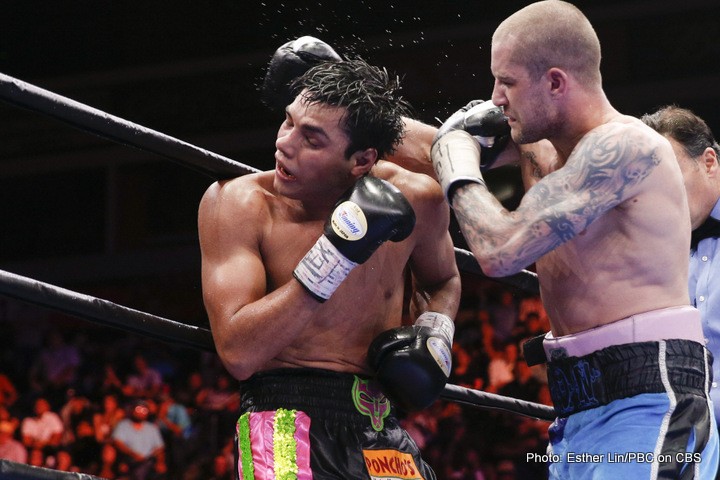 After last night’s contest in Texas- as part of Al Haymon’s Premier Boxing Champions brand – the history books will always say Ricky Burns (37-5, 11ko) lost 3 of his last 4 fights. Yet in my humble opinion, the former 2 weight world champion was extremely unlucky as the traveling fighter against Omar Figueroa (25-0-1, 18ko) – dropping the decision in a fight where he wasn’t just fighting his opponent but also the referee and the odds in general.

Some might say, in a different ring, with a different ref, had the action all been the same – Burns may well have walked out the victor. Or at least battled to a hard earned draw.

Burns lost two points for holding – in rounds 8 and 11 – after referee Laurence Cole appeared to be firmly “in the pocket” of Haymon’s home town fighter for the entire contest – bizarrely placing his hands on Burns repeatedly as the two fighters attempted to work up close.

After losing his title just over a year ago to the red-hot Terence Crawford in Glasgow, and declaring bankruptcy after a costly court battle with former promoter Frank Warren – many in Britain had written off the 32 year old Coatbridge fighter as finished and didn’t give him a prayer going in. As far as most were concerned he was fighting for the money and had seen his best days.

After surprising me so many times in the past when I thought he’d get beat, I wasn’t so quick to write Ricky off, though I was realistic of his chances. I didn’t think he’d be blown away, though I wasn’t sure he would still have enough to beat his big-punching opponent – the younger man by 7 years or even see the final bell.

He had been offered this fight as an opponent, a former name to turn up and get beat and I was cynical of his reasons for fighting on (money). It was a dangerous fight, and many questioned Eddie Hearn’s choosing to send him over to Texas as “lamb to the slaughter.”

Somebody failed to tell Burns he was supposed to just roll over though and he used every ounce of his championship experience to drag the young American into the deep distance-water he has had to endure in a couple of his recent fights for the first time. The world-level experience of the Scot was telling for me.

Not a noted puncher, Burns was determined to make a fight of it. After Figueroa had failed to make weight for the fight, coming in a pound and a half over the 140 limit I was worried about how much he would be bringing after re-hydration.

I’m sorry but the scores of 116-110 twice and 117-109 simply did not do Ricky Burns justice and maybe Omar’s attempts at cutting weight went against him, as Burns was determined to make a fight of it early and took the first couple of rounds on my card.

There is no doubt that the crisper, more accurate and sharper work at range came from the Scot. As the Texan did his best to smother Burns, and Ricky was drawn into inside fighting, the success and strength of Figueroa became clear – yet strangely Laurence Cole kept insistently touching and warning Burns, eventually leading to the two deductions.

As the fight wore on, Figueroa began to boss the exchanges, especially inside and had a strong finish to the fight that was probably enough to win – but not by the margins we witnessed. History records this fight as a points shut-out and I don’t think it’s a fair reflection of what happened in the ring.

“We knew it was gonna be tough but I did not agree with the two deductions for holding. He was holding just as much as me and that’s why I had to tie him up on the inside.”

“I always leave everything in the ring and I hope that everyone who watched enjoyed the fight.”

That they did. And bitterness over the result doesn’t help anybody. It is what it is. What we do know, is that Burns – who is now to move back down to 135 – is in NO WAY finished.

As a Matchroom sport fighter I can imagine should Kevin Mitchell beat Jorge Linares for the WBC title on May 30th – a huge domestic world title rematch clash will be on the cards. That would be epic and Eddie Hearn needs all the help he can get right now with bitterness at poor cards featuring mis-matches at an all time high.

Last night’s Birmingham card was tragic in terms of meaningful fights. Yet like Mitchell’s fight with Linares, should he and Ricky Burns ever fight again, it’s sure to be f****** PPV!!!

Burns beat Mitchell back in 2012 by stoppage and now Mitchell has potentially got his career back on track, it would be a great contest for UK fans.

Failing that I have no doubt that Ricky Burns has stamped himself firmly back into world title contention with that performance. The world 135 scene is not as deep as to deny him a realistic second shot at ANYBODY – TMT’s IBF champ Mickey Bey might fancy Burns in a defence of his belt after last night? Or maybe not!

Yet what is for certain is Ricky Burns can look forward to coming again. At just turned 32 the likeable Scot has clearly proven he has the will, skill and dedication to have one last run at world title glory.