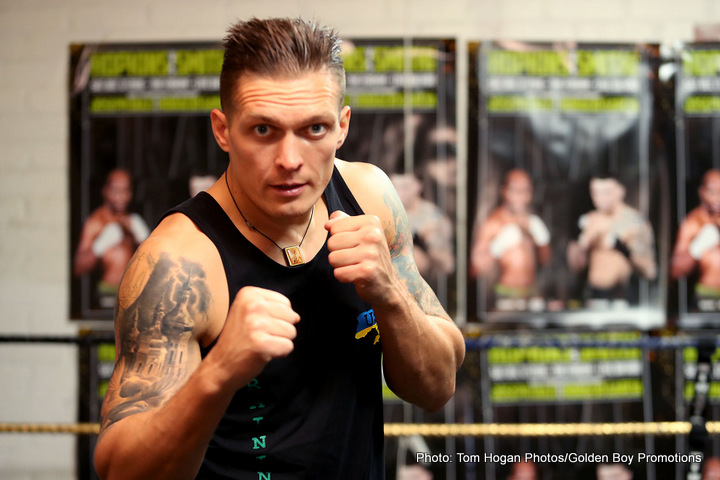 Usyk: Huck is tough and doesn’t fear anything

WBO World Champion Aleskandr Usyk on Marco Huck, tactics and Muhammad Ali ahead of the World Boxing Super Series premiere on September 9 at the Max-Schmeling-Halle in Berlin, Germany.

You picked Marco Huck as your opponent in the World Boxing Super Series. How would you describe him?

“Marco Huck is the most famous and prestigious opponent I could have chosen. He has accomplished most title defenses in the history of the cruiserweight division, an extremely experienced man. Huck does not fear anything or anyone and goes for the victory through the fire. He marches constantly forward and tries to determine his fights by all means.”

How do you prepare for Huck?

“I have a tactic specifically aimed at Huck. This is necessary because in my opinion he is one of my toughest competitors in this tournament. But why should I talk about it now and give Huck an advantage that he does not deserve? The surprising moment is on my side now, and I will take this advantage with me in the ring. Huck, by the way, has an advantage because he is at home in front of his audience in Berlin. This definitely makes him stronger, but I love this challenge!”

What do you think of the idea of the World Boxing Super Series and the Muhammad AlI Trophy?

“I can fulfill my dream of unifying all the belts in cruiserweight! I had previously thought about how it would be possible to achieve this goal. Fortunately, the door is now open for the road to glory. In this tournament all the world champions participates and the winner can rightly be described as the best cruiserweight in the world. On top of that the winner gets the Muhammad Ali Trophy. I admire Ali, because he is the biggest role model in boxing. I will thank God if I win a trophy with his name on it.”

How do you prepare for the fight against Huck?

“We try to understand what we need in that fight in order to win. We practise some things and we watch videos of Huck’s fights. It will for sure be a good fight for the fans. Huck has defended his title 13 times, ‘Sasha’ is a world champion.

We know that Huck never gives up, he always moves forward and tries to win. We will not underestimate Huck!”

Your fighter is seen as the favourite to win The Muhammad Ali Trophy. Do you agree?

But if you don’t believe in victory there is no sense taking part in the World Boxing Super Series. ‘Sasha’ wants to have all the four belts in the cruiserweight division and he wants the Muhammad Ali Trophy. There will be one guy with everything by the end of the tournament and ‘Sasha’ wants to be that guy.”

How is it to train Usyk?

“‘Sasha’ is very smart, he understands what he needs. He trains heard, he listens, he likes to learn. He trains hard in every camp and he tries to grow from fight to fight. If he gets the victory against Huck, we will concentrate on the next fight.”

Tickets for the premiere of the World Boxing Super Series September 9 at the Max-Schmeling-Halle are available at www.eventim.de and www.StubHub.de ​

The World Boxing Super Series is delighted to announce that the inaugural season of the Muhammad Ali Trophy will feature ALL four reigning cruiserweight champions. WBO titlist & Olympic gold medal winner Oleksandr Usyk (12-0, 10 KOs) has officially joined the revolutionary bracket-style elimination tournament that already features unbeaten champions Yunier Dorticos (WBA), Mairis Briedis (WBC) and Murat Gassiev (IBF) as well as former champions Marco Huck and Krzysztof Wlodarczyk, with two more spots to be filled. On July 8, all participants will come face-to-face at the Draft Gala in Monaco where they will hand-pick their quarter-final opponents.

Usyk is thrilled to be fighting for The Greatest Prize in Boxing, the Muhammad Ali Trophy. “I feel happy and inspired with the idea of such a tournament,” he stated. ”I’ve been dreaming of putting together all the champs to see who is the strongest and becomes the undisputed king of the division. I look forward to gaining three more world championship belts to my collection as well as the Greatest’s Muhammad Ali Trophy!”

Roberto Dalmiglio, Comosa´s Head of Management Board, said the stakes could not be any higher. “This is a historic moment,” he stated. “Nobody has ever assembled as many top fighters as the World Boxing Super Series and put them in an elimination tournament to determine the undisputed number one. Whoever emerges from a competition that features the four reigning champions, two former champions as well as two rising challengers to be announced shortly will be universally recognized as the greatest cruiserweight out there.”

Richard Schafer, Comosa´s Chairman of the Americas, has lauded the fighters` for accepting the ultimate challenge. “It takes a lot of heart to sign up for the Muhammad Ali Trophy because the level of competition is beyond everything the world has ever seen,” he said. “Eight stars will put it all on the line – their belts, their unbeaten records and their reputation – knowing that only one of them can win. With four belts and the Muhammad Ali Trophy at stake, the World Boxing Super Series is as good as it gets for fighters and fans around the world.”

Kalle Sauerland, Comosa´s Chief Boxing Officer, can´t wait for the tournament bracket to be unveiled during the Draft Gala. In an innovative process, the four top-seeds (to be determined by Comosa) will hand-pick their opponents from the four unseeded boxers. “This has never been done before and there could not be a more exciting way to kick off the World Boxing Super Series,” Sauerland said. “Just like the boxing fans all over the world, we are very curious to find out about the fighters’ picks. The stage is certainly set for an exciting tournament.”

The World Boxing Super Series is delighted to confirm the next star participant for the cruiserweight competition. Former WBO World Champion Marco Huck (40-4-1, 27 KOs) has joined a star-studded tournament line-up that already features the undefeated and reigning world champions Murat Gassiev (IBF), Yunier Dorticos (WBA) and Mairis Briedis (WBC) as well as former world champion Krysztof Wlodarczyk. Starting in September, eight of the world´s best cruiserweights will battle it out in a revolutionary bracket-style elimination tournament for The Greatest Prize in Boxing, the Muhammad Ali Trophy.

Huck is looking forward to the biggest challenge of his life. “I am thrilled to be joining the Champions League of Boxing,” he said. “In the great history of the sport there has never been a tournament like this. Eight world-class fighters will enter the competition but just one man can prevail. I cannot wait to show the world that I am best of all those strong champions.”

Huck has been a major player in the cruiserweight division for many years, tying the record for the most title defenses (13) before losing to Kryzsztof Glowacki in August 2015. He bounced back with convincing victories over Ola Afolabi and Dmytro Kucher before falling to WBC kingpin & fellow World Boxing Super Series participant Mairis Briedis earlier this year.

Huck´s quarter-final opponent will be determined during the Draft Gala at Monaco´s famed Grimaldi Forum on July 8. In a live TV show, the four top-seeds per weight class will hand-pick their opponents from the unseeded boxers, with the Comosa Board determining the seeding once all participants have been confirmed. “There are no weak opponents in the tournament, so I don´t care whom I fight,” Huck said. “I want to be the best so I have to beat them all anyway. I don´t mind in which order I defeat them.”

Roberto Dalmiglio, Comosa´s Head of Management Board, is excited to welcome another fan favorite to the tournament. “Three undefeated reigning world champions and two former world champions that have really stamped their authority on the division – the World Boxing Super Series´ cruiserweight competition already features an amazing line-up and there are still three spots to be filled,” he said. “Never before have so many great fighters faced each other in a KO tournament within such a short period of time. But that is what the Muhammad Ali Trophy is all about, the best fighting the best in a fan-friendly way.”

The cruiserweight competitors combine for a fearsome record of 160 wins, seven losses and 119 KOs. “There is an incredible amount of talent at cruiserweight,” said Kalle Sauerland, Comosa´s Chief Boxing Officer. “The World Boxing Super Series will answer the one question fans have been asking themselves for so many years: Who is the undisputed number one in a division loaded with undefeated champions and great fighters? We´ll find out come May 2018.”

In the inaugural season of the World Boxing Super Series, 16 elite fighters – eight super-middleweights and eight cruiserweights – will battle out a bracket-style elimination tournament. In both divisions, there will be four quarter-finals (September / October 2017), two semi-finals (early 2018) and one final (May 2018), making for a total of 14 high-class fights. The tournament bracket will be determined during the Draft Gala in Monaco on July 8.