Tyson Fury admits that he’s wearing out at 34 after 14 years in the pro ranks, and he’s not sure how long he can keep going before he faces permanent retirement.

This Saturday, December 3rd, Fury’s got an easy fight against old journeyman Derek Chisora whom he selected out of the hat to defend his WBC heavyweight title against on BT Sport Box Office and live on ESPN+ at the Tottenham Hotspurs Stadium in London.

After this fight, Fury hopes to face IBF/WBA/WBO heavyweight champion Oleksandr Usyk for the undisputed in the first quarter.

While that fight should happen, it’s not a given that it will because if Fury is harboring doubts about his desire to take it, he could sabotage the negotiations by giving Usyk a strict deadline the way he did with Anthony Joshua to ensure that he fouls things up.

Fury has already said that if he doesn’t face Usyk next, he’ll fight Joe Joyce. Either of those match-ups is one that Fury could lose and then be faced with the retirement question. You can picture Joyce beating Fury at his game, clubbing him with heavy shots on the inside until he falls to the canvas.

All tricks that Fury used to defeat Deontay Wilder, holding, wrestling, leaning, throwing rabbit punches, aren’t guaranteed to work on Joyce because a lot stronger physically and built for that kind of stuff.

Joe Joyce is sturdier than Fury and can destroy him in close if he resorts to the tactics he used to defeat Wilder, Dillian Whyte, and Otto Wallin. Knowing all that, Fury will likely dodge Joyce for the remainder of his career. 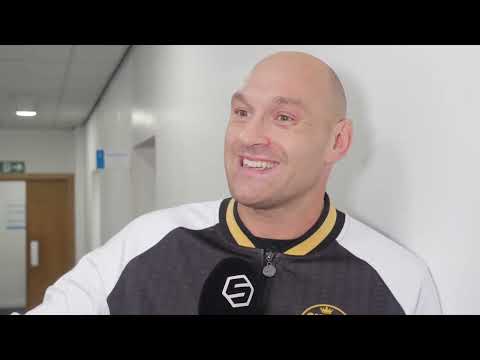 Tyson says he could stick around until his mid-40s and have a lot of losses on his resume before he retires, but it’s obvious that he’s got way too much pride to suffer more than a loss or two before he gets discouraged and retires.

Fury will not want fans to see him get beaten repeatedly the way fighters do once they’re no longer in their primes. With the way Fury brags about himself 24/7, he will not be able to mentally handle the humiliation of getting beaten over and over by the younger lions in the division.

Physically, Fury has a typical dad’s body, and it’s hard to believe he’s an athlete looking at him. With flab off the sides of his frame, and his non-toned appearance, which resembles his dad John Fury, it’s not a shock that he’s wearing down.

The three fights with Deontay Wilder put a lot of wear & tear on Fury, and he’s fortunate not to have been knocked out twice in those encounters.

Fury has an estimated fortune of $65 million, so money isn’t a need for him the way it would be for the average person that is trying to make ends meet.

“I don’t know if I can ever be ready for retirement, and this is the problem,” said Tyson Fury to the Sportsman. “I’m in a very big dilemma with boxing because I’m in my prime. I’m worn out, basically.

“However, I’m still undefeated and still going. How long will this last? How long can I keep going? And what happens when it’s not there anymore? The answer to that question is that I don’t know, and that’s why I’m back.

“There were four months when I was retired and refused a lot of money to come back and do other fights and things.