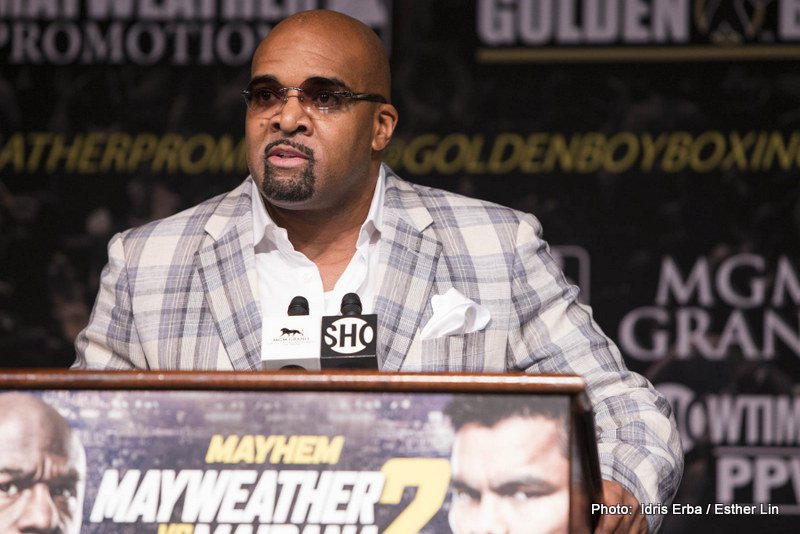 Floyd Mayweather’s assertions that Andre Berto will be the final fight of his illustrious career have caused many to raise a cynical eyebrow, certain that the P4P boss won’t be able to withstand the temptation of yet more filthy lucre as well as a shot at bolstering his claim as the self professed “best ever” by beating Rocky Marciano’s hallowed 49-0 unblemished slate with a 50th contest next year.

One man who insists that won’t be the case is Floyd’s right hand man and confidant, Leonard Ellerbe, the “official” mouthpiece of the outfit, who remains steadfast in his belief that we will see no more Mayweather after September 12th.

“Here’s a guy who’s made well over a half-billion dollars, doing it his way, and he can ride off into the sunset after this,” Ellerbe said when the fight was officially announced.

“That’s a fact. This is Floyd’s last fight. I’m not trying to sell it that way. This is going to be his last fight. And the fans get a chance to see Floyd in a very, very exciting fight with a guy that we know is coming to fight.”

A popular belief remains that a second fight with a “fit” Manny Pacquiao next May is a realistic option, although given the fallout from the first fight and the poor reception it received worldwide, one wonders if Mayweather will seriously entertain that idea, even with the potential revenues still likely to be huge.

When you consider Floyd said he felt disrespected and publicly showed his disdain toward the whole “shoulder-gate” episode, most notably by slapping around a dummy and belittling the Filipino in an indirect message, the fight seems all the more unlikely.

That’s not to say he won’t attempt to get to 50-0, with some speculation he could return in a final bout under mentor Al Haymon’s Premier Boxing Champions brand – probably against another “soft-touch” opponent in something of a charm offensive to propel the PBC into the future and metaphorically hand over the torch to the next generation of young fighters coming through – most notable among them in Floyd’s mind, the Mayweather promoted Texan, Errol Spence Jr.

I’d very much doubt that if Floyd does return to attempt the 50-0 that he will choose Amir Khan as the opponent given his fondness for watching the Brit beg and plead for a chance to fight him.

However many fans – me included – have a bit of a penchant for watching Khan humiliate himself regarding Mayweather, so I’d definitely be open to Floyd announcing his return and saying “anybody’s possible” with regards to his opponent. Maybe he could conduct another online poll!!!

Yet in all seriousness, we have September 12th to get past first. Then and only then will Mayweather himself make up his mind what he is to do, yet with the declining health of Uncle Roger said to be a motivating factor in his desire to hang ’em up, and with Ellebe’s claim this IS really it, is there a chance Floyd means what he’s saying?