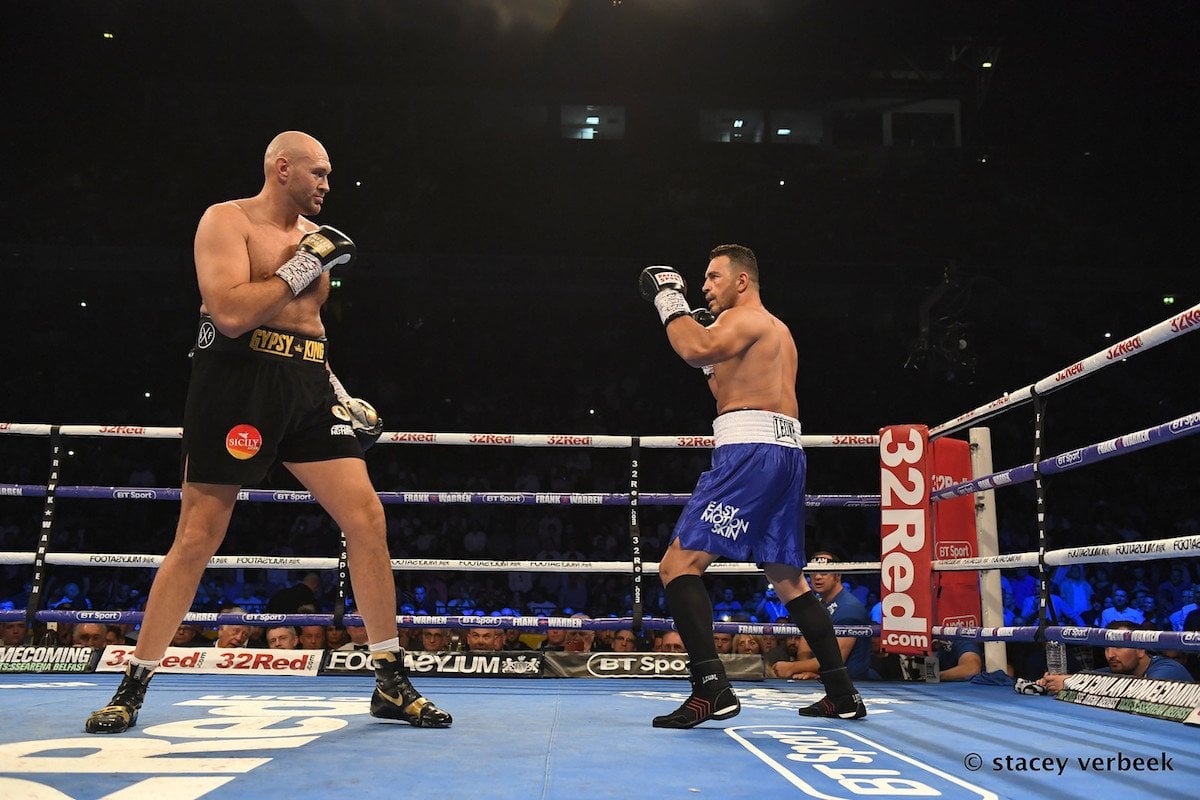 Returning with a sluggish yet winning performance against an opponent who failed to do that which he was paid to do, and make the former heavyweight champion look good, Tyson Fury at least got the ball rolling last night in Manchester.

Looking slow on his feet, Fury – boxing for the first time in over two-and-a-half years – got four completed rounds under his belt, before handpicked foe Sefer Seferi quit on his stool. After the win, Fury claimed he could have flattened the Albanian cruiser in “ten seconds,” but he opted not to, so as to get some rounds in. Maybe, maybe not. But as interested observer David Price said, Fury is not known for blowing people out quickly, “but he finds a way to win.”

The question is who will Fury fight in his next step in the comeback. Promoter Frank Warren says the former champion will return in August, but no name has yet been confirmed. Everyone wants a piece of Fury – including Tony Bellew, Jarrell Miller and the aforementioned Price – and a step up in quality of opposition must surely come in Fury’s next outing.

Warren said a fight with Bellew (who has again predicted he will KO Fury, “as simple as that”) can happen this year, but Fury himself stated how he doesn’t want “anyone small.” Fury wasn’t referring to the fame and notoriety of his future opposition, simply the physical stature of his would-be next foe.

Fury says he is targeting ruling champions Anthony Joshua and Deontay Wilder, both of whom stand over 6’5,” and that he needs tall opponents to get ready. This is where Price may enter the picture. Price said last night how there would be plenty of interest in a fight between he and the giant he once defeated as an amateur, and he may well be right.

Price is determined to carry on despite being stopped in nastily violent fashion (again) by Alexander Povetkin quite recently (a fight in which Price fought well for a time, letting his hands go) and he would be expected to at the least go a few rounds with Fury. And if during this time Price chucked some big bombs (as he did against Povetkin until being blasted out himself) – and if one or more of them actually landed on Fury’s chin – then we might get a decently interesting and attractive fight.

Which is something that was sorely lacking last night – unless you enjoyed the fan-fought out of the ring action in Manchester. Its always a bad thing when paying fans feel the need to create their own violence, having been shortchanged of such after having laid down some big bucks for a decent seat.

Fury was entitled to one easy and straightforward return fight, but fans may not stand for a second. Certainly not a third.