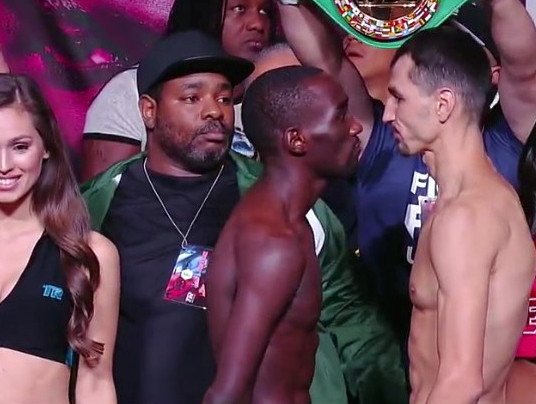 WBO light welterweight champion Terence “Bud” Crawford (28-0, 20 KOs) came right in at the light welterweight limit today in weighing in at 140lbs for his unification match this Saturday night against the taller and unbeaten WBC 140lb champion Viktor Postol (28-0, 12 KOs) for their match at the MGM Grand in Las Vegas, Nevada. The 5’11” Postol weighed in at 139.5lbs. He looked in great shape and very lean.

Crawford has a lot of expectations resting on his narrow shoulders, as he’s seen by some as the replacement for Manny Pacquiao as Top Rank’s flagship fighter for the time being. Whether Crawford can replace Pacquiao or not will be determined in part on Saturday night when he gets inside the ring with the 32-year-old Postol. However, it’s unlikely that Crawford will ever come close to the achievements that we saw with Pacquiao, because he doesn’t appear to have the frame to move beyond the light welterweight division. If Top Rank moves Crawford to welterweight, they’ll probably need to match him the same way they’re matching WBO welterweight champion Jessie Vargas by having him moved strategically so that he can have success.

Unbeaten Top Rank light heavyweight contender Oleksandr Gvozdyk (10-0, 10 KOs) weighed in at 175lbs for his fight against former world title challenger Tommy Karpency (26-5-1, 15 KOs). Karpency, who recently knocked out by WBC champion Adonis Stevenson, weighed in at 174 ½ pounds. Top Rank promoter Bob Arum believes that Gvozdyk will be ready to challenge for a world title against champion Sergey Kovalev by next year. Arum can’t afford to wait too long with the 30-year-old Gvozdyk because he’s not young enough for him to wait until Kovalev is over the hill.