It seems the earliest we will see the anticipated return fight between Oleksandr Usyk and Anthony Joshua is May, with the fight perhaps set to take place later than that, in June. Eddie Hearn, speaking with The DAZN Boxing Show, said he has been visiting potential locations – including a trip out to the Middle East – and and that he and Usyk and his team will meet in the UK for talks this week. Hearn said he feels the rematch will take place in May or June. 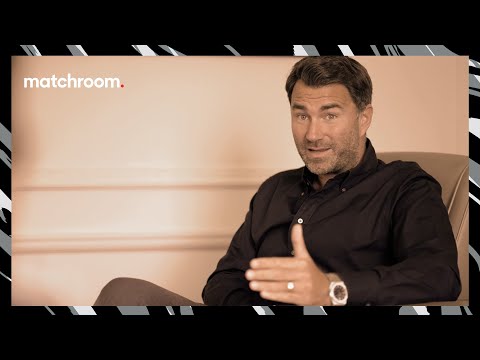 “We’re getting to a stage now where we’re going to start thinking about securing a date which will be the end of May or June,” Hearn said. “There’s nothing that’s going to stop Anthony Joshua from taking that fight.”

If the return fight takes place in June, that will be some nine months on from the first fight, which Usyk of course won via wide decision. Right after the upsetting loss (whether Usyk’s win over AJ was an actual upset is up to you), there was talk of Joshua getting the rematch done by March, or certainly by April. But now we hear it will be May or June. It really does take a long time for some of the top heavyweights to get their fights done these days. Will 2022 prove to be another one-fight year for Joshua?

If the Usyk return is as tough and as demanding a fight as most people strongly feel it will be, it is perhaps unlikely Joshua would get a second fight in this year – whether he wins or loses. You have to go back to 2019 for the last year when Joshua boxed twice in the same year. Usyk too has not been active, with him having had just one fight in 2019, one in 2020, and one in 2021. Will Usyk manage to get two fights in this year?

For fans that want to see the big heavyweight fights take place, it is frustrating being made to wait so long; seeing two of the top-three best heavyweights in the world fighting so infrequently. There have been issues that were out of the fighters’ control (such as the coronavirus) but the old timers moan and groan over the way the elite fighters often box just once a year these days. And who can blame them for moaning? It’s becoming a trend, where the top names box just once a year.

Things change of course, but there was a time when the world heavyweight king boxed four times a year, sometimes even five. Those days are never coming back. There is of course so much more money available to elite fighters today; heavyweights especially, so in a way you cannot blame them for fighting so infrequently. But in terms of being at their best, does fighting just once a year hinder a fighter? How can they be as sharp as, say, Muhammad Ali, if they take such long breaks between fights, thus allowing their sharpness to dull at least a little? There is nothing like regular ring action to keep a fighter sharp. As someone once said, “you cannot keep your tools sharp if you don’t take them out of the shed as often as you should.”

Joshua is still fresh, as is Usyk; together, they have had just 45 pro fights combined; this despite the fact that both men have turned the age of 30. By the time their rematch rolls around, that September 25, 2021 fight will seem a long time ago.