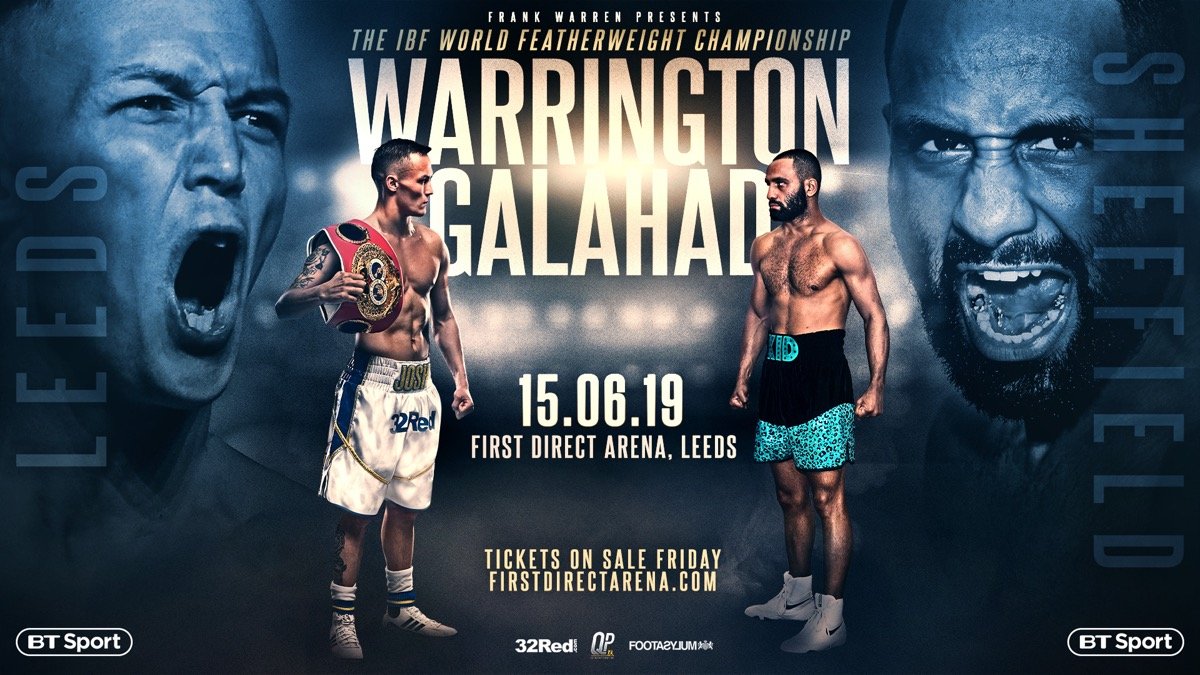 Mandatory challenger Galahad has been playing mind games with the IBF world featherweight champion even since Hall of Fame promoter Frank Warren won the purse bids and announced the fight.

Galahad (26-0) first claimed that Warrington’s Dad and trainer Sean O’Hagan won’t be able to handle his son getting beaten by his fellow Yorkshireman and might throw in the towel to save him.

Now Galahad has gone in two-footed on the champion who is making the second defence of the title he won against Lee Selby and defended against Carl Frampton in December.

Sheffield’s Galahad will walk into a pit of hate when he enters enemy territory in Leeds, but insists that Warrington (28-0) will fail to handle the pressure once his fists turn up the heat.

Galahad, 29, warned: “Emotions can get you seriously hurt and Josh is an emotional man. He always goes in there with his heart on his sleeve.

“It is my destiny and I am here now and I am gonna rip that title from him in his home town.”

A top quality undercard will be confirmed in the coming weeks.

Warrington, 28, caused a big upset when he outpointed defending champion Lee Selby in front of 25,000 fans at Elland Road, home of his beloved Leeds United last May.

In December, he cemented his status as one of the boxing stars of 2018 with a thrilling points win against two weight world champion, Carl Frampton at Manchester Arena in his maiden defence.

Warrington (28-0) had being eyeing a unification clash against WBO champion, Oscar Valdez but the IBF ordered him to face Galahad and purses bids were won by the champion’s promoter, Frank Warren.

Galahad (26-0) was born in Qatar but lived in Sheffield for much of his life and learnt his skills under the tutelage of the late Brendan Ingle. He is now trained by Brendan’s son Dominic.

He became Warrington’s number one contender in October when he outpointed Toka Kahn Clary on his American debut in Boston in an IBF final eliminator.

Warrington, a former English, British, Commonwealth, European and WBC international champion boxed Galahad twice when they were amateurs winning both contests on points.

He said: “All of sudden people are saying I am capable of beating every featherweight in the world and with that comes expectation.

“I will go into this fight as the bookies’ favourite, but I will be 100 per-cent focused and looking to do a job.

“I knew Barry when we were amateurs and he was always a decent guy, but over the last few years he seems to have changed and put on some persona to blag fans, opponents or himself.

“He did well at super-bantamweight, but he has beaten nobody as a featherweight and he has lost respect from me for some of his antics.

“I want to be Ring Magazine champion, own all the belts and they are in touching distance. I can beat all the featherweights.

“I am concentrating purely on Barry, but after this I want one of the other world champions. I want champion after champion.”

Galahad, 28, said: “Josh’s biggest asset is that people underestimate him and he is a lot better than what he looks.

“He’s strong, tough, durable and mentally strong, but I have the skill, will and mental toughness to beat him.

“He beat me fair and square when we were amateurs, but down the line I knew I would always fight him again. This is professional boxing, different game.

“Why am I the man to beat him? I know mentally that I am on a different level and I have the best team in British boxing.

“He is going to walk onto a shot, he is going to get hurt very badly and his dad who trains him will stop the fight because he will make an emotional decision and throw in the towel around round six, seven or eight.”

Warrington snapped back: “That prediction makes me giggle. It is funny how these scenarios get drawn up. He isn’t in touch with reality and talking daft. It is playground stuff.

“He can spout off what he likes, but when the first bell goes it will be me against him and we will see how special he and his team are then.”

BT Sport have the live and exclusive TV rights for Warrington v Galahad in the UK.

Tickets for Warrington v Galahad go on sale via firstdirectarena.com at 12pm on Friday 22nd March and are priced as below: