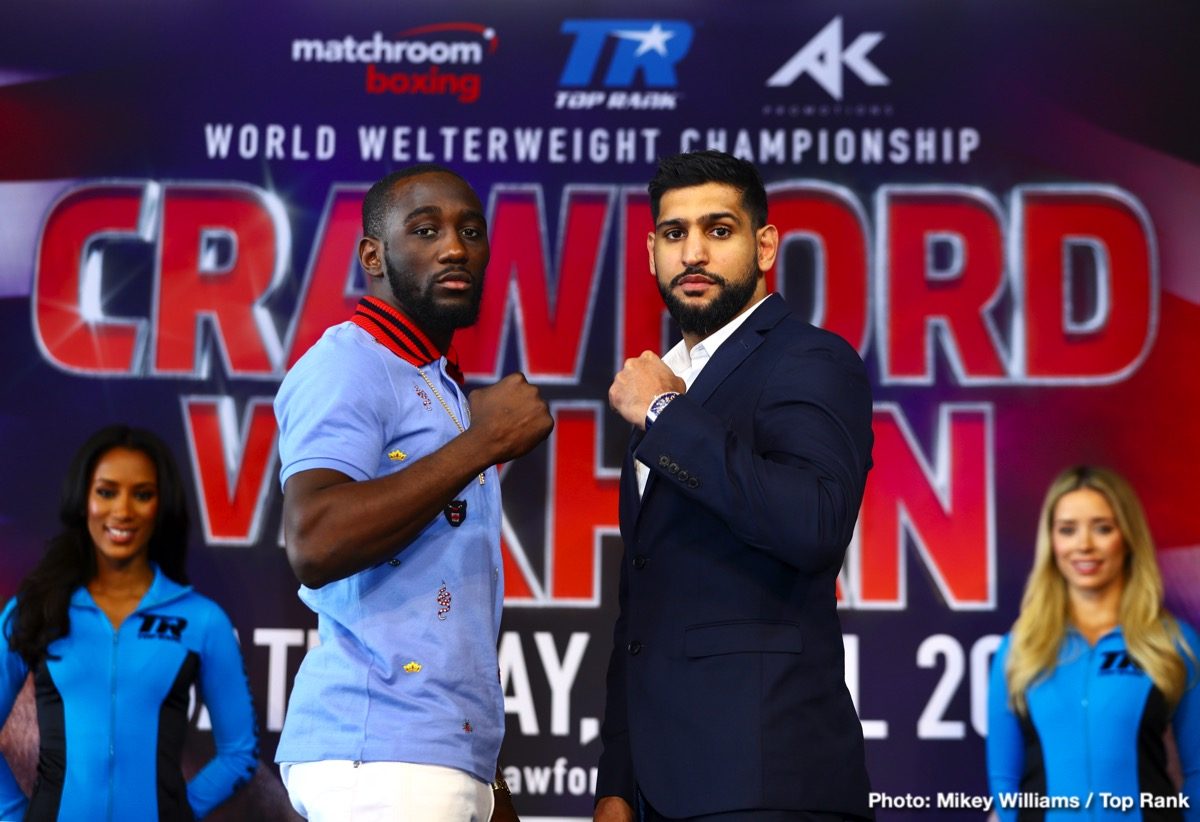 BOB ARUM: Before Terence takes the questions, I just want to say what a privilege it is to have him on and have him on this promotion. You have to realize that 40 years ago I promoted the great welterweight of that time, Sugar Ray Leonard, and now, 40 years later, I have the honor of promoting the successor to Sugar Ray Leonard, Terence Crawford. I believe Terence Crawford is the best welterweight in the world. Certainly a contender for pound-for-pound the best fighter in the world, and I believe he is in a real fight with Amir Khan, who I have explained to everybody that I have been a fan of. He is a terrific fighter and that’s what Terence wants – challenges – as he goes on with his great career.

TERENCE CRAWFORD: I appreciate all of the support that I have been getting. I am looking forward to April 20 at MSG.

How do you feel about having your first pay-per-view fight against a big-name fighter?

TERENCE CRAWFORD: This is not my first pay per view fight. I fought Postol on pay- per-view and the significance of the Postol fight cannot be denied.

What are your thoughts on Amir Khan?

TERENCE CRAWFORD: This is a big fight. Amir Khan never lost in the welterweight division. He knows what he is doing in the ring. He boxes really good. He is really crafty. He is a veteran. His is going to be a tough fight.

They have a common opponent – Breidis Prescott. What do you take away from the fights each had with him?

BRIAN MCINTYRE: That’s 100 percent on Terence because he will switch when he feels the need to switch. We don’t tell him in the corner when to switch – that is left up to the fighter. I am not going to take credit for him becoming one of the best southpaws ever. I give all the credit to him because he does it when he needs to.

Did you ever think these two would meet in the ring?

BRIAN MCINTYRE: Yes, Terence is always looking to fight the best fighters out there and right now I believe Khan is ranked in the top 10 as a welterweight, so we are going to fight him. We are going after the best ones and Khan was available so he is next up on the chopping block.

Where do you see Khan in his career right now?

BRIAN MCINTYRE: Right now, looking at his last two fights, he is like a determined fighter that wants to get the job done. He is coming off two wins for himself; he’s coming in on top and trying to upset Terence. At no time is Terence going to take Khan lightly.

BRIAN MCINTYRE: I would rate Khan in the top five of the opponents that Terence has faced. He has accomplished a lot of things in his career. He’s got experience, he’s knowledgeable, he knows what to do in the ring at times, he’s got good ring IQ and good ring generalship. So, I would put him up there in the top five.

Who are the others in the top 5?

BRIAN MCINTYRE: He beat two {Olympic} gold medalist, he beat a few of those undefeated champions. Hey, he’s up there.

Do you see it as Khan is a good fighter and it is a tough fight, but it is only a matter of time until Crawford puts a good hit on that chin?

Bob tweeted about fighting Spence and talking to Haymon about it. How realistic do you think that is?

BRIAN MCINTYRE: Right now, our total focus is on Amir Khan. Bob is doing his thing, trying to make the fight happen. So, hey, let Bob do his thing and let us do our thing and when the fight is done we’ll sit down with Bob and hopefully the other guys will come to the table.

What sparring partners do you have coming in for this camp?

BRIAN MCINTYRE: Well, that’s a little bit too much information to be giving out. You’ll find out after the fight.

What does a win for Terence do for what comes up next?

Your careers have sort of paralleled each other, but Amir was a weight class ahead of you. Did you ever see this fight coming?

TERENCE CRAWFORD: Not really. I didn’t see a fight between myself and Amir Khan happening because, you’re right, he was the bigger guy fighting in higher weight classes. He fought Canelo at a higher weight class and we thought he would be at 154. Right now, I am excited to share the ring with him.

Khan seems to be a big underdog in this fight. What do you see in him that will trouble you? He has a lot to win and you have a lot to lose in this fight…

How has the evolution of you fighting as a southpaw happened since the Prescott fight?

TERENCE CRAWFORD: They are all different fights. It just depends on the moment. I can fight great in both stances. I have been fighting more southpaw and I believe a lot of people forget that I am orthodox. But that goes to show how well I am doing in my second stance.

How do you compare yourself to a southpaw now to then since you have improved a lot?

TERENCE CRAWFORD: I have gotten a lot more experience as a southpaw in big fights and have been fighting tremendously in the southpaw stance.

You are fast, he is fast – do you think it will come down to who punches harder and who can take the best shot?

TERENCE CRAWFORD: I wouldn’t say that. Amir Khan might be fast, and he might have good movement, but I am a great boxer myself and I am not the slowest fighter by any means. I believe in my skills and I don’t believe that it is my punching power that is going to lead me to victory. I believe it is my whole overall skills and mindset that will lead me to victory on April 20.

While you are doing that, showing your skills, do you feel it is only a matter of time before you land the big shot and he crumbles?

TERENCE CRAWFORD: No, I don’t look at that. I go into the fight looking to get the win. If the knockout comes it comes but that’s not what I am focusing on or looking at. It is boxing so anything can happen. We prepare to go 12 hard rounds and that’s the way we are going to take it.

Bob tweeted that when you win this fight he wants to make the Spence fight happen. What do you think about that? Is it makeable?

TERENCE CRAWFORD: Of course it is makeable. I believe it would be the biggest fight in the welterweight division. But like you said, I have this fight against Amir Khan. After the fight, we can talk about Errol Spence and Al Haymon and Top Rank doing business together. But right now, I am not even thinking or worried about Errol Spence.

Are you competitive on the business side that would make you want to beat the Spence-Garcia PPV numbers of 350K?

TERENCE CRAWFORD: At the same time, I have no control over that. I don’t know where a lot of people are getting their numbers from because I believe that is private information. They can say whatever they want, but if they did that much, more power to them. That is good for them. But like I said, I am not worried about that. My focus is to go in the ring on April 20 and solidify a good performance and get the victory. The numbers should be good. Amir Khan is a great fighter, fighting a great fighter in myself. I think the fans will enjoy a great night of boxing.

You hear the noise that you are a heavy favorite. Do you worry about that while you prepare?

TERENCE CRAWFORD: I am never going to be complacent. I know about the threats that he brings into the ring and the troubles that I can have if I overlook Amir Khan. He’s got everything to gain so we have to take this fight real serious because the fights that slip out of a fighters’ hands happen when they think the fight is in the bag and it didn’t even start yet. We are going into the fight 110 percent focused and ready for the best Amir Khan come fight night.

Do you consider Amir Khan the toughest opponent you have had so far?

TERENCE CRAWFORD: I don’t know. I can’t say because I haven’t fought him before. I am looking for the best Amir Khan come fight night and we will handle everything accordingly.

Use the hashtag #CrawfordKhan to join the conversation on social media.