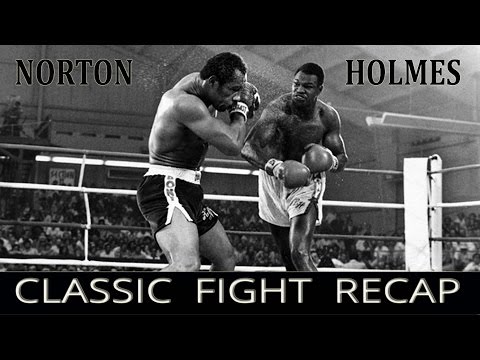 Rummy’s Corner proudly presents another edition of a new ongoing series that will explore some of the greatest bouts in the rich history of professional boxing. This week’s second installment of “Classic Fight Recap” features the epic fifteen round heavyweight championship contest that took place on June 9, 1978, between WBC heavyweight champion Ken Norton (40-4-0) and undefeated challenger Larry Holmes (27-0-0), which took place in Las Vegas, Nevada.

Ken Norton was presented with the WBC heavyweight championship on March 28, 1978, based on his 15 round split decision victory against Jimmy Young the previous November. But Norton never actually won that belt inside the ring. He was given the belt, when newly crowned heavyweight champion Leon Spinks had decided to have a rematch with Muhammad Ali, instead of facing his number one WBC mandatory, Norton. Spinks had scored a surprising upset against Ali on February 15, 1978, when he was awarded 15 round split decision against Ali.

Meanwhile, many observers still had a lot of questions about The Easton Assassin. Holmes was talented, and highly regarded, but he had far less experience than Norton at the championship level going into this contest. Norton was the favorite going in, but many observers believed that Holmes had the talent, skills, and pedigree to dethrone the champion, whom many viewed as being illegitimate in the sense that he never did win that WBC belt inside the ring.

This classic encounter between Ken Norton and Larry Holmes provided boxing fans with some great back and forth action, incredible drama, several momentum shifts, a beautiful blend of skills and power, intelligent counter-punching, lots of championship heart and determination, and an epic 15th and final round that saw both warriors battling it out with absolutely everything they had, putting a dramatic close to one of the greatest 15 rounds heavyweight championship contests of all time.

This edition of Rummy’s Corner attempts to provide a comprehensive recap of these thrilling heavyweight championship bouts while featuring the key highlights from both explosive action-packed boxing match-ups! Please watch and enjoy the video! And if you have any suggestions for a future edition of “Classic Fight Recap”, please share your suggestions in the comments section. Thank you!