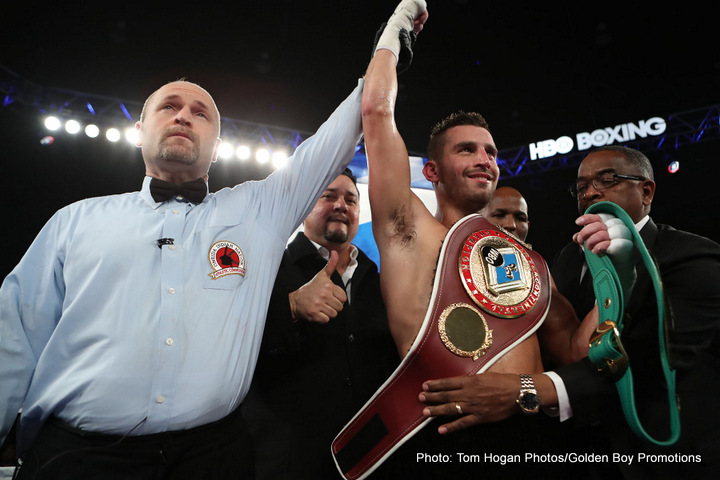 Less than two months after delivering the top knockout of 2017, Canadian knockout artist David Lemieux (37-3, 33 KOs) will return in a 10-round fight against Marco “Dorado” Reyes (34-4, 25 KOs) as the chief support to the highly anticipated battle between Canelo Álvarez and Julio Cesar Chávez, Jr. on Saturday, May 6. The mega-event will be produced and distributed live by HBO Pay-Per-View beginning at 9:00 p.m. ET/6:00 p.m. PT.

Opening up the stacked Cinco de Mayo weekend card at T-Mobile Arena in Las Vegas, former U.S. Olympian and current undefeated NABF Featherweight champion Joseph “JoJo” Diaz, Jr. (23-0, 13 KOs) will face perhaps his toughest challenge to date when he defends his title against the undefeated Manuel “Tino” Avila (22-0, 8 KOs) in a 10-round battle.

These two fights along with the main event and the previously announced brawl between Argentinian slugger Lucas “La Maquina” Matthysse (37-4, 34 KOs) and Emmanuel “Tranzformer” Taylor (20-4, 14 KOs) will round out the pay-per-view telecast on Saturday May 6.

“With three of Golden Boy Promotions’ most exciting contenders appearing on the pay-per-view, as well as the biggest star in the sport, Canelo Álvarez, the Cinco de Mayo card can be described in one word, ‘stacked’,” said Golden Boy Promotions Chairman and CEO Oscar De La Hoya. “I fully expect four action-packed fights that will have fans out of their seats for the entire evening.”

The hard-hitting Lemieux is riding a three-fight winning streak and was last seen delivering a thunderous third-round knockout of the highly touted Curtis “Cerebral Assassin” Stevens that has put the Canadian directly back into the title picture.

“I’m thankful to have the opportunity of being part of this event during the Cinco de Mayo celebrations,” Lemieux said. “I think I was able to send a clear message on March 11 with my performance against Stevens and I intend to do the same on May 6. I want to make sure that everyone understands that David Lemieux is making his way towards the top and that he intends to stay there.”

Reyes, a 29-year-old former WBC FECOMBOX middleweight champion, has knocked out 25 opponents and went toe-to-toe with Chavez, Jr., in a unanimous decision defeat that many spectators had closer than what came up on the scorecards.

“I know everyone is talking about the Lemieux knockout, but I’m ready to take him out,” Reyes said. “With my Mexican fans supporting me on Cinco de Mayo weekend, I’m ready to turn Lemieux’s lights out.”

“Following his performance against Curtis ‘The Cerebral Assassin’ Stevens at Turning Stone Resort Casino, fight fans wanted to see David in the ring again as soon as possible,” said Eye of the Tiger Management President Camille Estephan. “Being part of such a tremendous card that will be featured on May 6 with eyes on us from all around the world represents an incredible showcase opportunity. We are convinced that David will shine. He is in great shape and is more motivated than ever to conquer the top of the middleweight division,”

In the opening battle of the HBO Pay-Per-View telecast, two undefeated fighters will go toe-to-toe with both Joseph Diaz, Jr. and Manuel Avila risking their undefeated records for a chance at greater glory.

“I’m excited to return for the first time in 2017 and put my title on the line against such a tough competitor,” Diaz, Jr. said. “This fight will put me one step closer to a world title shot.”

“This is a golden opportunity to move myself into world title contention, and I’m not planning to let that chance slip away,” Avila said. “I know all about JoJo’s undefeated record, but he’s never faced anyone like me, and at the end of the night, my hand will be raised in victory.”

Preliminary bouts for the May 6 show will be announced in the coming weeks.

Tickets for a closed circuit viewing of the fights at the Grand Ballroom at MGM Grand Hotel & Casino are on sale for $75, not including applicable fees. All seats are general admission and can be purchased at the MGM Grand box office or by phone with a major credit card at 800-745-3000.