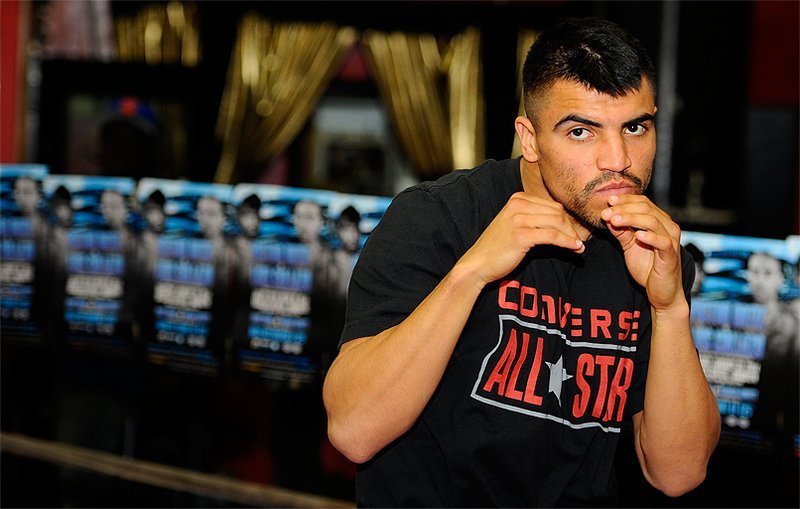 BROOKLYN, N.Y. (January 27) – Photo by HoganPhotos – Fighters for the Victor Ortiz vs. Luis Collazo card gathered at Gleason’s Gym in Brooklyn, N.Y. to workout for the media and hold a press conference before their respective Thursday, Jan. 30 fights at Barclays Center airing live on FOX Sports 1 and FOX Deportes.

“We’re so ready, we’ve had the best sparring partners and we’re ready to get in the ring. Training camp was really good.

[On experiencing “ring rust”] “Absolutely not, I’m completely 100 percent confident. I have no ring rust whatsoever.

“I’m not at all concerned about my jaw, I feel great and I can’t wait to get in the ring.

“This is my first time fighting in Brooklyn and I’m excited. I don’t have any words to say, nothing bad, nothing good. I’m here for the victory.”

“I’m really excited and humbled by the opportunity. I just want to give the boxing fans a great fight and a great outing. I’ve been waiting a long time for a fight of this caliber.

[On Ortiz’s strategy] “He can do what he wants, but I know on fight night I will be ready. If he wants to dance, I’ll be the bull.

“This fight is for my future. I’m trying not to look past it, but this victory here means everything to me. It means I have a future. If not, I have to start all over again from scratch.

“Preparation has been great. I’ve got a great team. We’re just getting stronger and feeling great.

“I’ve been counting down for weeks waiting patiently for this. I was motivated before getting this fight, but this has escalated my motivation.

[On supporting the Nephcure Foundation] “As a fighter, we fight to give the fans entertainment. To be a champion fighting for your life, you have to be champion in your heart.”

“We’ve had six or seven hard weeks of training camp, doing everything we have to do to prepare for the fight.

“We [Gomez and Arnett] fought in the amateurs. I beat him and knocked him down three times. So now we’re going back at it again. He’s improved a lot but somebody’s ‘0’ has to go.

“We’ve grown and developed a lot both power-wise and ability-wise.

[On fighting at Barclays Center] “It’s a short drive from my house. I love fighting there. I have a lot of people coming to see me.

[On what to expect Thursday] “You can expect fireworks. I have everything, speed, power and whatever it takes to get the ‘W,’ I’ll be doing it.”

“This fight is a great opportunity and a great stage to be on during Super Bowl week.

“I feel like I’m an all-around fighter. I can box, I can punch, I can sit in the pocket and fight inside and outside. The main thing is I can adjust and adapt to anything.

“I think these are some great, fan-friendly fights. I like to give the fans what they want to see.

[On fighting Gomez as amateurs] “It keeps coming up, but all I can say is we’re men now. We keep growing up and we’ll see what happens on Thursday. We were kids then, running around the ring throwing punches.

“I expect a good entertaining fight, something the fans will love to see. This will get both of us back on TV again. It will definitely be a win on my end.

“We are going to have a great show Thursday night so everyone get your tickets.”

“I had a fun training camp. A lot of people approach this as a job, I understand that but for me, training camp was fun because I’m fighting a southpaw and I’m a southpaw.

“Anyone who knows me knows that I’m the oldest of six boys and all of us our southpaws.

“This is my sixth time fighting at Barclays Center and I’m ready to go out and take another step forward in my pro career.

“I just have to do what I have to do and keep carrying on with my career.”

“Fighting at Barclays Center is a good experience for me because it’s the best arena in the world. It’s a great thing that’s convenient for people and people from Brooklyn love to fight.

“Signing with Golden Boy was a beautiful thing for me. I couldn’t really get fights. For someone with my work ethic who trains all year it was disappointing not to get fights. But Golden Boy saw something in me and I’m excited they decided to sign me.

“Teachers in school used to say I wasn’t going to graduate, but I graduated high school, got accepted to college and I chose a different path.

“I am blessed with talent and I am so hungry to be the best, that’s why I call myself Zungry.”

“We have a great main event, great co-main event and I just hope everyone up here is ready. I know I’m ready and I hope everyone comes out and supports a great show.”

“This is such a stacked card for it being in the middle of Super Bowl week here in New York. The whole city is buzzing.

“I am excited looking at this whole line up, it’s really a great card we have here.

“Everything in New York City is electric. It is a perfect time for a card like this. Tickets start at 25 dollars, which you just can’t beat.

Brett Yormark, CEO of Barclays Center and the Brooklyn Nets

“Our venue has become a place where the local fighting community aspires to become future champions.

“I am looking forward to seeing one of Brooklyn’s stars, Luis Collazo, in action.

“We really want Brooklyn to be a destination for fans that are coming to the New York metropolitan area as part of their plans before the big game on Sunday night.”