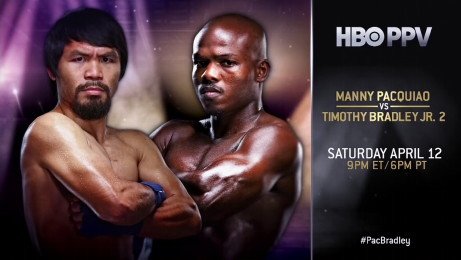 It has been almost two years since Tim Bradley and Manny Pacquiao cast the script for one of the most controversial boxing decisions of 2012. We all expected a reasonably easy evening at the arena for Manny Pacquiao but with the aid of some incompetent judging, the boxing’s gods did not will it.

Bradley vs Pacquiao I:

I will not deny that Bradley exceed expectations through his resilience in the face of the beating Manny sought to issue on the night in question. He did well, but there is no way that he did enough to convince any of us that he was the rightful victor. Given the uproar I decided to do what was just and from the comforts of my office joined the panel the WBO had assembled to address the controversial decision. My analysis and findings were presented in a report for East Side Boxing titled: A Desert Storm Arises Yet the Streets Still Bleed. I am pleased to say that our stance was further supported by the panel’s findings which concluded Pacquiao to be the victor.

I have looked for potential reasons as to understand the motivation behind their incompetent assessment. Through speculation I have found that Bradley was given credit for surviving the pain so many have succumbed to, he stood in front of a storm and held his own. This is boxing we do not merely award points for surviving a day with certain death.

Irrespective of whether the decision is judged to be fair or not the record states that Manny Pacquiao’s unbeaten seven year reign of terror was brought to halt by Timothy Bradley.

I have heard of the mental anguish and storm that faced Bradley following the Pacquiao bout and even though I disagree with the decision I did reserve some sympathy for his struggle. He was gifted a decision by the judges and was abounded to face the consequences alone. I am not going to pass judgement about some of the statements he made pertaining to suicidal thoughts.

I have to give credit to Bradley; he overcame the unforeseen curse of being WBO champion- through a controversial decision. I believe that he did well in forging ahead and coming out of the abyss that surrounded him and doing what every warrior does best; fight.

He went into his next bout to take upon the boulder throwing Ruslan Provodnikov. To the frustration of his corner, Tim Bradley stepped out of his comfort zone, negating his skills to strike out with a rising flurry of aggression. Even though Bradley is lined with respectable power we all know he is not an esteemed knock out artist. Like a caged beast he sought every opportunity to engage in combat as if fighting the seeming injustice justice he faced in the wake of his biggest fight. Against the wishes of his corner men, he fought the early rounds with tempered aggression and paid for it with a few unsteady moments. However to his credit, Bradley sapped it up and went on to fight in a manner which rewarded his corner’s patience. He employed his superior skills and athleticism to direct the fight as he saw fit. The relentless Ruslan did not let up and forced Bradley to take a knee in the 12th round, however no one is at liberty to question Bradley’s chin, it is granite. Bradley exercised his abilities and won the bout in entertaining fashion. I believe that some of those who may have jeered him , celebrated his performance in this bout. We thank Timothy Bradley and Ruslan Provodnikov for their effort in furnishing us with 2013’s Fight of the Year.

Tim Bradley and Juan Manuel Marquez engaged in their bout on 12 October 2013. It was going to be an interesting bout, one man sent Pacquio to bed with a brutal K.O. and the other was crowned champion under some dubious circumstances.

Bradley knew that Marquez and the masses in attendance wanted to see him fail, yet he met their resistance with notable energy and confidence. You have to give Bradley credit for his testicular fortitude, he stood in front of the man that nearly decapitated Manny Pacquiao and refused to be intimidated. He banged, he ensured that he punished Marquez for every punch he threw. He must be one of fittest boxers in boxing he fought with so much energy and intensity. Although some rounds were fairly close for the most part Timothy Bradley fought this bout in the driver’s seat dictating how this script unfolded. Bradley serviced Marquez’s effort with a useful jab which would impair his intentions. He simply did not afford Marquez the opportunity to gain sufficient momentum, as he exploited every opening.

Bradley was disciplined in his approach and commissioned all his tools to frustrate the seasoned warrior in Marquez. The final round of this bout was a war, Marquez was clearly behind and needed this round to make a tangible statement with his fists. He caught Bradley with some great combinations but in turn was almost sent to the seat of his pants by a Bradley left hook.

I strongly disagree with the decision in Bradley’s first encounter with Pacquiao. However I believe that Bradley should be afforded the respect due to any champion, he deserves it and has proven his calibre. His heart and abilities are beyond question and soon we will find out if it will be suffice.