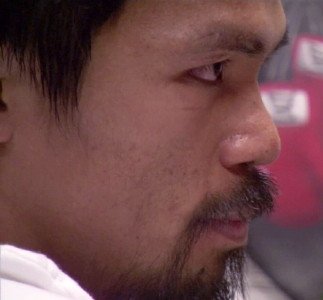 Boxing writers and analyst base their predictions for tonight’s rematch on the first fight and subsequent fights. As true with all prognosticators, they manipulate the facts to support their pick, not unlike students writing a position paper. They don’t lie, but they often times emphasize something beyond its real importance. Their goal is to make a persuasive, logical argument that if A is true, then it follows B must be true as well.

As a result, we end up with two seemingly valid arguments. Which one is correct. Or, are both correct? Fans of either fighter have no problem lining up with their fighter’s side. They obviously don’t need much convincing. But, what about the group that has not been influenced by personal feelings? They look at what’s been said, and are confused, because both sides have provided relevant points.

The group picking Bradley doesn’t argue to build up his skills. Rather, they argue to degrade Pacauiao. In a kind of backward way, they contend the Pacman doesn’t have it anymore. They support that contention by citing his failure to kayo anyone since his win over Cotto. They feel he has lost his killer instinct, and because of his religion has become too nice. To them this is a weakness in the cruelest of sports. Many’s age and the fact that he’s been in a lot of wars, adds to the weakening of a great fighter. It’s not so much that they feel Bradley is the superior fighter, rather they feel Manny is on the downward side, ripe for the taking.

Manny believers feel he has fully recovered from the devastating knockout he suffered at the right hand of Marquez. They go on to say Manny was winning on all score cards prior to the kayo punch. Reluctantly, they admit that Manny might have failed to demonstrate his previous savagery. There’s not much doubt he could have stopped Margarito and maybe Sugar Shane Mosley, but they say his failure to stop Rios was due to the Marquez kayo. In other words, Manny knew he was winning the fight so why take a chance and get caught with a lucky punch. On the plus sign, they point out that Manny is faster than Bradley, and punches much harder. Although they feel Manny should have been awarded the decision in the first fight, they explain the simple plan is for Manny to be more aggressive, and to throw more punches in tonight’s rematch. The insinuation is that Manny is certainly capable of doing so. Consequently if the fight goes the distance, Manny should win a decision because he will have Bradley on the defensive much of the fight. It’s logical, right?

It interesting to note that Manny’s hall of fame trainer Freddie Roach feels all Manny has to do is throw more combinations. He believes the key to beating Bradley is to throw his combination and then slide in the same direction that Bradley moves, and throw another combination. Sounds simple right. It would seem the only difficulty would be in anticipating which direction Bradley will move. The key to answering that problem is to study films of the first fight, and films of some of Bradley’s other fights, and note tendencies. Set the trap, and then you’ve got him. If instead, Bradley chooses to be stationary and exchange, it would be to Manny’s advantage, because he is the bigger puncher.

The problem with all of this is Bradley isn’t that predictable. He is much more complicated than someone who makes one move, and can be trapped and made to pay. The truth is much more complicated. Bradley moves both his feet and head, a lot! He has great reflexes and instincts. He doesn’t just lay his head to one side and keep it there. Rather, his head is constantly moving side to side, up and down, coupled with his quick feet. So, the idea of Manny winning based on the importance of anticipating one of Bradley’s moves would seem to fall short. A better chance for Manny might be to get Bradley to exchange punches with him. That might not be so far fetched. Bradley and his trainer Joel Diaz sincerely believe the deck is stacked against them because of the controversial win in the first fight, As a result, they feel they might have to risk everything and go for a knockout. That might be the real move Manny is hoping for. There would be no chasing, no sliding over, just big shots right up the middle. If that happens, Bradley’s next move might be downward for the count.