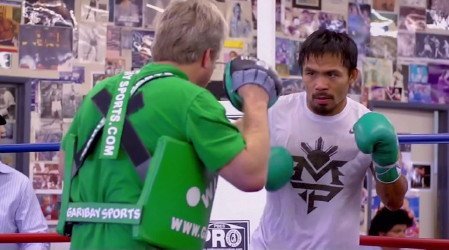 It is clearly evident to us ways that 2012 was a devastating year for Manny Pacquiao and his team. Disappointment surfaced, some fans rejoiced while others tore their betting slips as the hopes of Pacquiao vs Mayweather were dashed twice in one year, with the last issued in devastating fashion. We all begun to wonder whether the raging Philippines typhoon had finally met its dying days in the boxing ring.

I say this without reservation although Manny went into this fight with a loss to Bradley, it is not a loss of conventional measure but was engineered by some incapable judging. There was no celebration in such but yet another reminder for us all, pertaining to the questionable decisions which tarnish our sport. Manny Pacquiao remained the peoples’ champ, even in the midst of blatant robbery; the congressman was diplomatic and humble.

Pacquiao and Marquez braced themselves for a fourth encounter, with confidence and vengeance lingering in their aura. We all knew that the 8th December 2012 would bring us an exciting duel and the book makers countless bets. Their three previous bouts had seemingly not allowed either camp peace and some strands of controversy remained. We were more than obliged to entertain yet another engagement between these two warriors. Another exciting season of HBO 24/7, especially given rumors that Marquez had some colorful characters in his camp and he was back on his urine diet.

The first round did not see any significant action as the two fighters sought to assess each other before exploiting any openings. Perhaps the challenge rested in the fact that they knew each other all too well. The second round followed similar pattern as Manny slowly asserted himself and established momentum. It looked like this may be Manny’s attempt to finally settle the doubts and bring conclusion to their duels. Pacquiao appeared resurrected in his heightened activity, it promised to be a great bout. The third round would see Marquez enjoying success with some telling body blows and these contributed to what would soon come. Manny dropped his hands in anticipation of yet another punishing body shot, only to be put down by a crushing overhand right. Marquez seems to have found titanium to line his battering ram. In the fourth round, Manny had reason to excise caution in his onslaught going forward for he too had not foreseen such power carried by his old foe.

The fifth round saw hell light the ring up for a fire fight, this is the reason we worship our gladiators and their courage. Manny came upon him with his renowned intensity, as he punished Marquez for flooring him in the third round. Marquez was forced to take a standing count as Manny waited in the periphery ready to exploit the damage already inflicted. Pacquiao’s efforts were rewarded with notable damage inflicted upon Marquez’s nose. If you had not believed it , you would have to believe it, the congressman was back. The sixth round saw Pacquiao exercise his options at near will as he sought to bring an end to the war battered Marquez. He threw lithium coated bombs from all angels and jabs that brought palpitations to Marquez’s bloodied face. Tired of being bullied the remaining seconds saw Marquez launch into a flurry but Manny was able to contain the charge. Then Manny went in and left himself open, leaning forward only to be sent head first into the canvas by a Marquez paralyzing right hand. Marquez was definitely behind on score cards but had finally got his revenge and ended his bout without any lingering questions.

You have to respect these two fighters for the bouts they have given us, fearlessly practicing their art and the history books will remember their duels. None the less the question probed us all, where could the congressman go after such a paralyzing K.O. and after the unjust loss to Bradley.
Pacquiao vs Rios

After almost a year’s absence from the ring, Manny Pacquiao took upon Brandon Rios in Macao, China. After back to back defeats this was a Manny’s saving bout, failure here would have cemented the end of his reign. No disrespect intended to Rios for he is decorated and deserves all the praise, however we all knew what the purpose of this bout was and it was fulfilled.

Manny controlled the whole bout, pushing for his trade mark combinations and activity. There was nothing that Rios could launch which could upset Manny’s momentum . Rios was fighting a man who had terrorized men greater than himself in stature; a man who had once forgotten the texture of defeat.

Manny Pacquiao served himself well by taking some time away from the ring and renewing his intention. However we all know that he has yet to prove himself and what better way to do so than against the man who ended his reign of terror. There is unfinished business between Manny Pacquiao and Timothy Bradley, the controversy has not been forgotten, as both combatants have something to prove.

Some have advised him to save his legacy and pursue politics but Manny is a man unto himself. He has something to prove to himself, something to prove to the boxing world and all his fans. That he is still possessed by the scorching drive and instinct which maimed so many who dared to stand before him. The question is can he whether the storm.