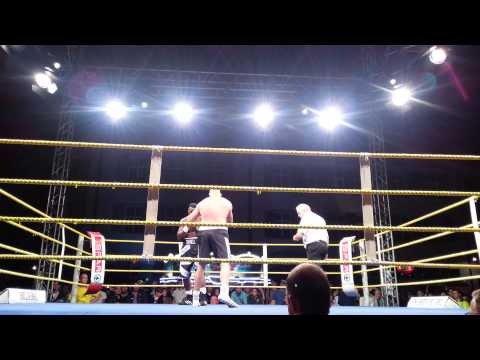 It was a slow, slow weekend for boxing as fans know, yet over in the somewhat unlikely setting of Switzerland, an unbeaten heavyweight scored a win that just might suggest he is worth keeping an eye on. In a fight that flew very much under the radar outside of Switzerland, unbeaten German heavyweight Erkan Teper scored the biggest win of his three-year pro career last night in Basel, as he scored a 1st-round TKO over the seasoned and well travelled Michael Sprott.

31-year-old, 6’5” Teper scored with a right hand and Sprott was unable to recover. Improving to 11-0(7), Teper might have moved himself into position for some bigger fights. 38-year-old Sprott is now 37-21(17) and loser of six of his last seven outings. This could well be the end for the former British and Commonwealth champion.

So how good/promising is Teper? At 6’5” and around 235-pounds, Teper is big enough to perhaps make some noise against the best, and at 130-14-2, Teper had a fine amateur career, with lots of experience picked along the way. Winning a number of trophies, including the 2006 German Championships silver medal and the silver at the 2008 World Military Championships, Teper is now making some moves as a pro.

It’s still early days (a pro since September of 2010), but Teper has useful enough wins over usual suspects such as Cisse Salif (TKO2), Robert Hawkins (WU6) and now the very experienced Sprott. Hopefully, after his quick win last night, Teper will be back in action again before the year is out.