Tyson Fury got his teapot boiling today about the praise that IBF, WBA & WBO heavyweight champion Oleksandr Usyk is receiving from the boxing community over the skills that he showed with his back-to-back victories over Oleksandr Usyk.

To listen to how worked up Fury got in discussing Usyk’s skills or lack thereof; one got the sense that he’s highly jealous of him.

It appears that Fury seems to think that praise of Usyk’s skills from fans & the media is an automatic loss for him, as he’s demoted to a lower status and not on the same perch as the talented Ukrainian.

Unlike Fury, Usyk doesn’t rely on leaning on his opponents, grappling with them, and clubbing them with rabbit punches to the back of the head repeatedly. Usyk doesn’t push his opponents to the canvas, as we saw Fury do with Dillian Whyte.

During an interview today, Fury devalued Usyk’s wins, pointing out that he’d done very little since moving up to heavyweight, beating only journeyman Derek Chisora, inactive Chazz Witherspoon, and the bodybuilder Joshua twice.

“He wants to fight me; I want to fight him. I want an easy victory over a middleweight,” Tyson Fury said to Secondsout about wanting to fight Oleksandr Usyk. “Why wouldn’t I want to fight him? Everyone is raving about this guy being some great boxer.

“He’s had three fights at heavyweight. Journeyman Chisora, who I thought beat him, and then two fights against the bodybuilder AJ, who we know can’t box.

“So how is this guy [Usyk] a legendary boxer? Where is his great heavyweight resume? I will annihilate this bum. He’s just another European bum, as I always say. These European fighters are mostly bums.

“I gave that belt [Ring Magazine] up so they could fight for it. Do you know why? I’m going to become a three-time heavyweight Ring champion of the world. That’s how confident I am of battering Usyk.

“I don’t have to beat anybody because this was a three-headed dog,” said Fury when asked if he needed to beat Usyk to claim the #1 spot as the top heavyweight in boxing. 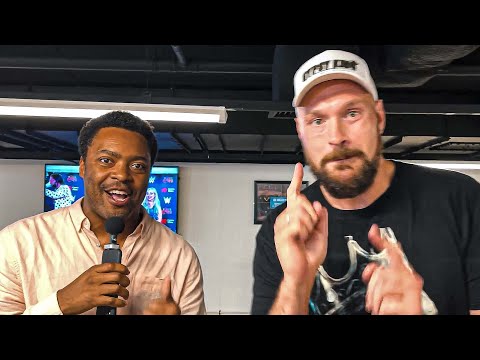