BIG BEAR LAKE, Calif. (Aug. 28, 2013) – Dozens of TV camera crews, newspaper reporters, photographers, online boxing media and bloggers made the 100-plus mile trek up the mountain to Big Bear Lake from the Los Angeles area on Tuesday to catch their final glimpse of WBC, WBA & Ring Magazine Super Welterweight World Champion Canelo Alvarez (42-0-1, 30 KO’s) before he travels to Las Vegas for his mega-showdown with undefeated Eight-Time and Five-Division World Champion Floyd “Money” Mayweather (44-0, 26 KO’s) as they headline “THE ONE: MAYWEATHER VS. CANELO’’ fight card on Saturday, Sept. 14, from the MGM Grand Garden Arena in Las Vegas, Nev., live on SHOWTIME PPV®.

During his two-hour media workout at Shane Mosley’s jam-packed home gym, that was streamed live on YouTube, UStream, sports.sho.com/live, http://www.goldenboypromotions.com, and http://www.mayweatherpromotions.com, the super welterweight world champion did countless interviews, some in groups and others in one-on-ones. He also hit the heavy bag, sparred several rounds with weighted gloves and did calisthenics as 50’s doo-wop and early 60’s music blared in the background.

The freckled-faced, red-haired 23-year-old Canelo has been staying at Mosley’s house and working out at his home gym for about a month. The young superstar is scheduled to leave Sunday for Las Vegas.

“I feel good about myself and can’t wait to get in the ring. I’m ready for this.

“I’m working very hard and doing my job. Even though I’m young, I have a lot of experience. That’s why I asked for this.

“This will be a tough physical fight, but I feel I have a lot of advantages. I am working on the things I can take advantage of.’’

(On training in Big Bear)

“Big Bear has been great. It is one of the greatest places to train. Even though it is a lot of work, I’ve been enjoying this camp. We’ve accomplished everything here that we set out to do.’’

(On making the contracted weight of 152 pounds, two less than his normal fighting limit)

“The weight is not going to be a factor. I’ll be fine for the fight. It’s no big thing. Actually, I feel I’m ahead of the curve. I’m not worried at all. It (the weight) will come off and I will be fine.

“Actually in some ways I’m in my best shape, or will be. Before I fought Austin Trout, I’d been off longer than I will be for this fight. I needed a lot of time to prepare for Trout. So, in some ways for this camp, my work has been easier.’’

(On feeling he doesn’t get the proper respect)

“I think a lot of people underestimate me, but those people are mostly critics, reporters. You never hear anything from the guys I fight. It’s only from those outside the ring that think I am beatable.’’

“This is a big day, an important time. It’s Mexican Independence day. I know I’ll have a lot of people there to support me.’’

“I’ve studied tapes of the fights he (Mayweather) had trouble in, like those against Miguel Cotto and Jose Luis Castillo. I’m looking for ways to penetrate Mayweather’s defense like they did. Cotto had success, but couldn’t maintain it. I plan to maintain it.’’

(Toughest part of being at training camp and away from home)

“I miss not seeing my daughter. I miss not being with her.’’ 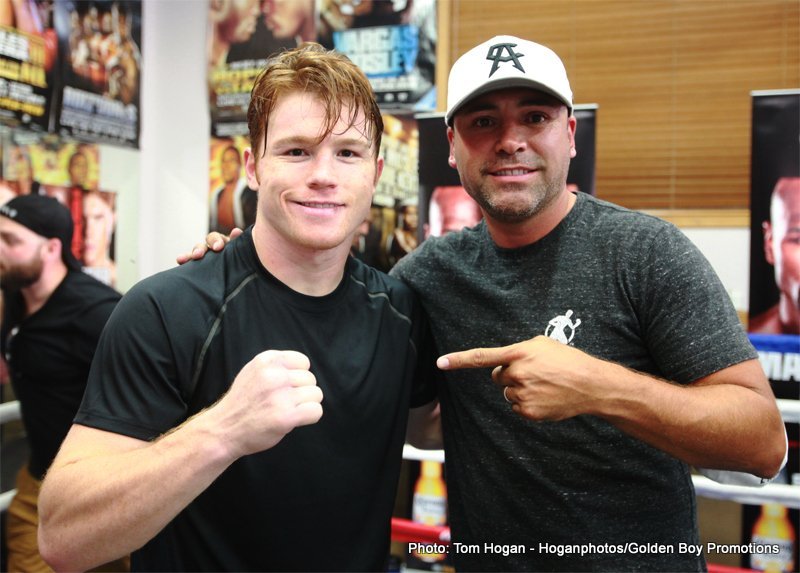 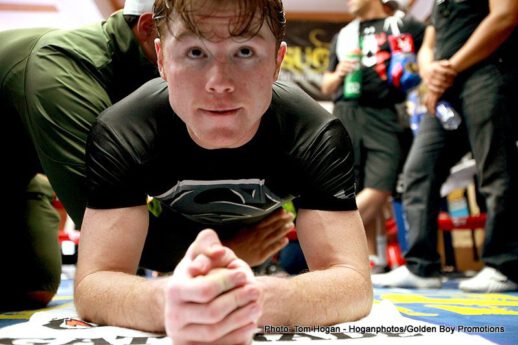 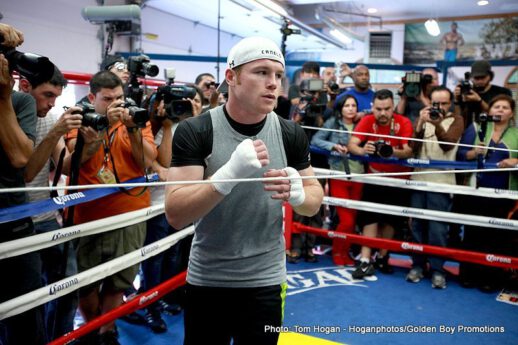 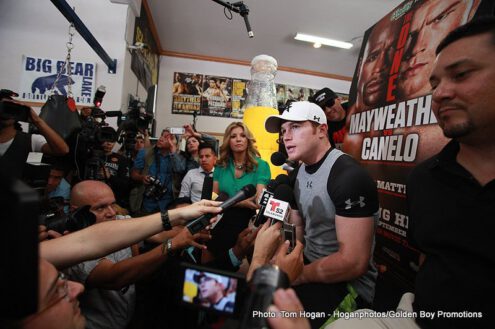 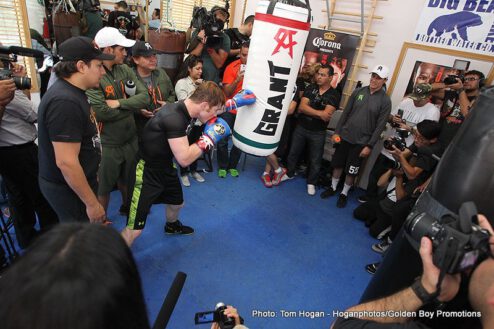 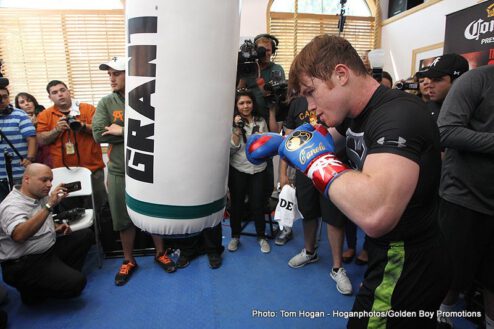 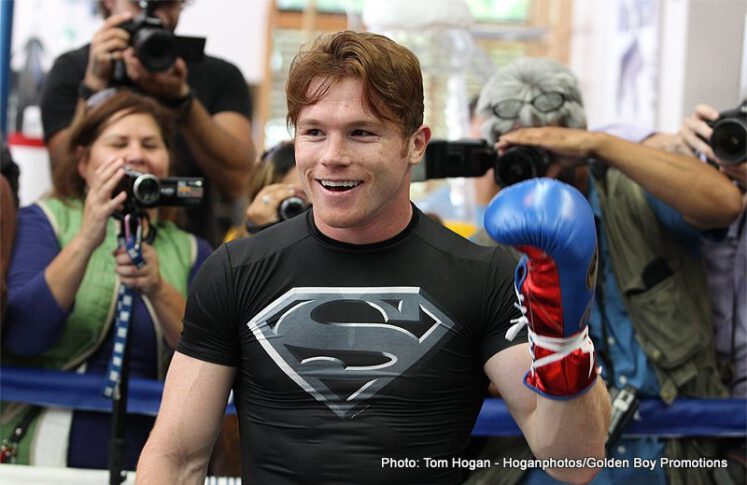 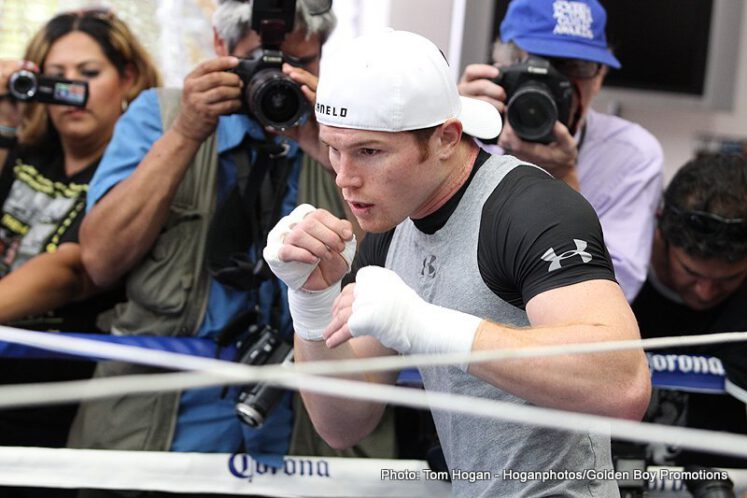 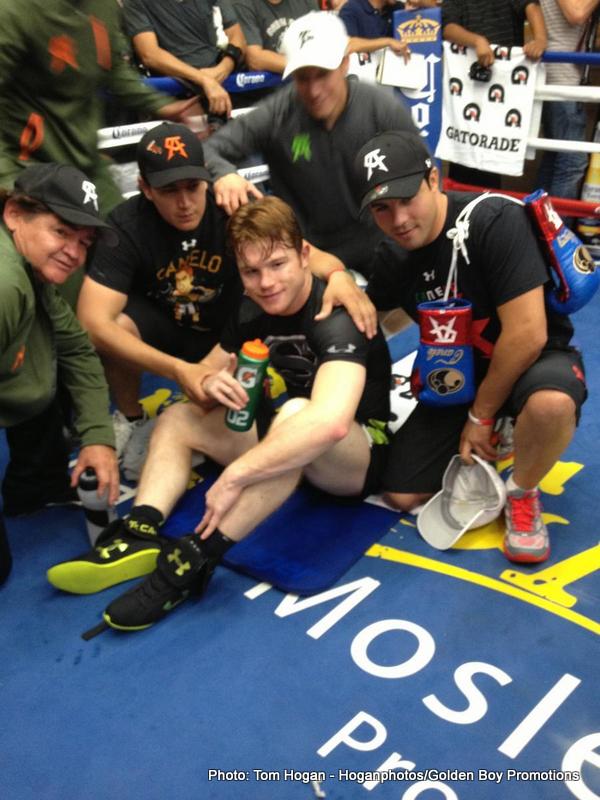 “I remember the first time I fought in a fight like this, a fight of this magnitude, and how I excited I was. Fighting on Mexican Independence Day is such an honor. You know both guys are going to be in great shape and it is going to be an exciting main event. But I’m betting on my horse. I feel it could be time for the changing of the guard.

“This is going to be a very interesting night of boxing, and definitely a memorable one. It’s already a record-breaking event and now we’ll see if it breaks the (pay-per-view) record. With all the social and media outlets out there, chances are that it might.’’

“I’ve known Canelo since he began to box when he was 13. [Co-trainer] Eddie [Reynoso] and I have been with him from the start. He’s the same kid now as he was then, very humble yet very dedicated.

“Canelo was always very strong but now he possesses the intelligence. We always knew from day one that he would be great.

“Floyd Sr. has said some negative things about Eddie and I. He’s questioned us as cornermen and trainers. Well, we’ve had five world champions and been involved in 40 world title fights. The Mayweathers [Floyd Sr., Roger and Jeff] may be more popular and well-known because they were pro fighters, but it doesn’t hurt their reputations that they work with a superstar.

“I think after Canelo wins on September 14, people will realize that he has a pretty good corner too. Eddie and I may not have the reputation that the Mayweathers have, but we know we can do the job. People will see on Sept. 14.

“Our entire family is very excited and motivated for this fight. We’ve known since the very beginning how great Canelo could be. The magnitude of this fight is enormous, but there is no doubt in any of our minds that he is going to win.

“Around the house, he was always called ‘Saul.’ Of course, worldwide, he is known mostly as ‘Canelo.’ But for me, his older brother, he will always be known as ‘Pecas’ [which translated into English means ‘Freckles’].”

“Freckles” will try to leave his mark on Mayweather and the boxing world on Sept. 14.