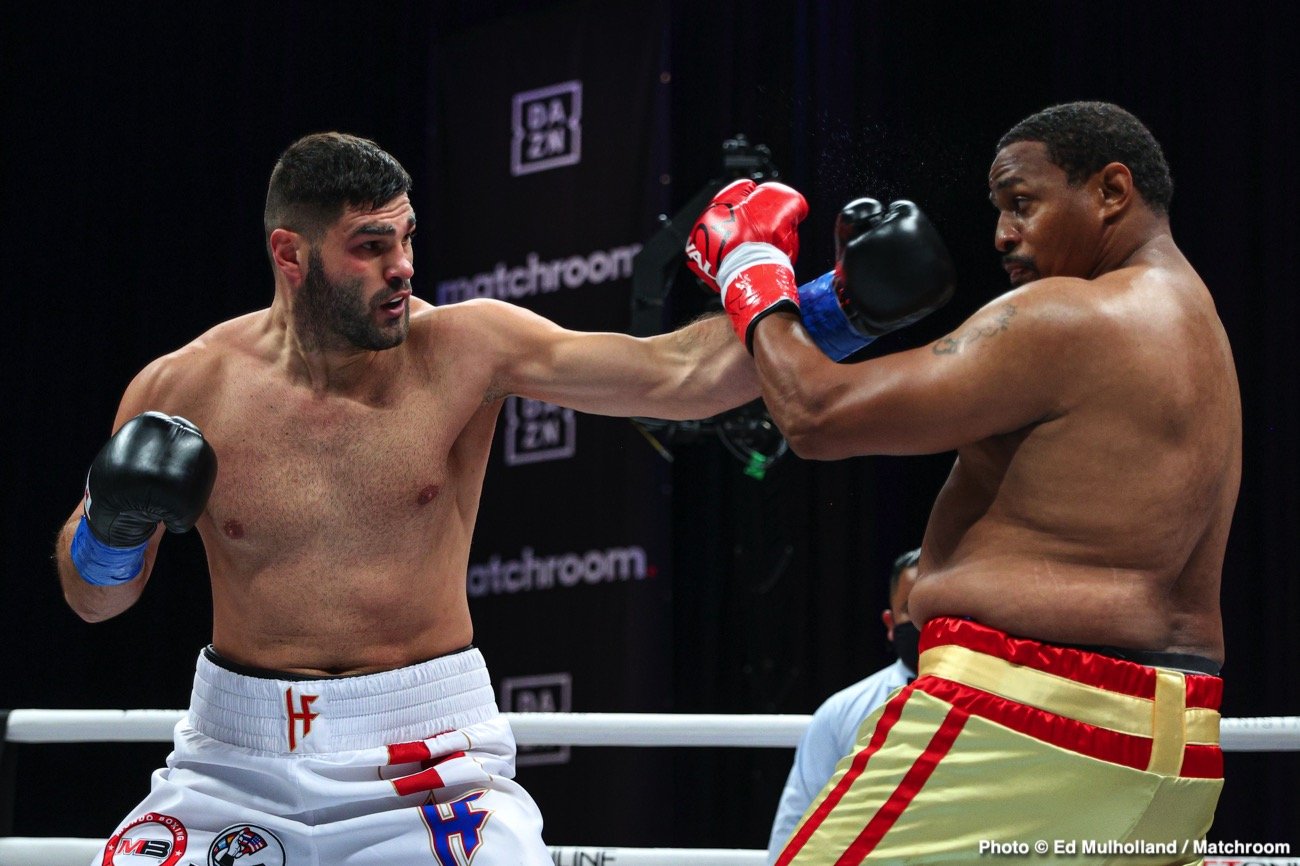 The mouth-watering IBF heavyweight title eliminator between 2016 Olympic gold medalist Tony Yoka and the highly ranked unbeaten Filip Hrgovic is reportedly in jeopardy because of a contract problem.

Until recently, Yoka, 29, had been signed to face fringe contender Martin Bakole on January 15th in a fight that was scheduled to take place in Tony’s home country of France in Paris. ESPN is reporting that due to COVID-19 restrictions, the Yoka vs. Bakole fight was postponed

With Yoka (11-0, 9 KOs) under contract for the postponed Bakole fight, the IBF will make a ruling on whether Tony must take this fight or if he’ll be permitted to move on and face unbeaten Hrgovic (14-0, 12 KOs) in the title eliminator.

If Yoka has to face Bakole, the IBF will need to pick another contender to face Hrgovic in a title eliminator.  Thus far, Joseph Parker and Luis Ortiz have declined that invitation.

Yoka’s boxing skills will likely be too much for Bakole if that fight happens. Unfortunately, Yoka would miss out on the IBF title eliminator, which would be a tremendous lost opportunity for him.

Top Rank, the co-promoters for Yoka, has already started negotiating with Hrgovic’s Sauerland promoters for the IBF title eliminator.

Read:  Eddie Hearn: Let's do Bivol vs. Beterbiev next for undisputed, why do we have to wait?

“All parties are waiting on the IBF to make a ruling as to whether Yoka-Hrgovic can go further,” Top Rank spokesperson Evan Korn said to ESPN.

It’s understandable from Yoka’s perspective for him to want to move in the direction of the IBF title eliminator against the ‘Stone Man’ Hrgovic, who he has twice beaten in the amateur ranks.

With a victory over the 6’6″ Hrgovic, Yoka would be mandatory to IBF heavyweight champion Oleksandr Usyk and would have the opportunity to make millions fighting him or whoever has the IBF title by 2023.

By the time the Yoka vs. Hrgovic winner gets a title shot against the IBF champion, it’ll likely be 2023, and not this year.

“I think you got to blame the French promoter purely because we have a contract with them that’s still valid,” Bakole’s trainer/manager Billy Nelson said to ESPN. “I just think it was very unjust and unfair that you can even talk to somebody when you sign the contract.”

The real question is whether Yoka’s co-promoters at Top Rank will look to buy him out of his contract with Bakole so that he can face Hrgovic?

If they’re confident that Yoka can win that fight, it makes sense for them to do so. Yoka can make millions if he defeats Hrgovic, and he’s already proven he can do so.

Bakole, who’s full name is Martin Bakole Ilunga, is the younger brother of WBC cruiserweight champion Ilunga Makabu, a fighter that Canelo Alvarez could be facing next on May 7th on DAZN.

In 2018, Bakole suffered his only career loss in losing to Michael Hunter by a tenth round knockout. Since then, Bakole has rebounded with six consecutive victories, two of which came against Sergey Kuzmin and Mariusz Wach.

Yoka defeated Hrgovic in the 2016 Olympics by a 2-1 score to capture a gold medal.

As pros, Yoka and Hrgovic have been matched against essentially weak opposition, which is odd given their amateur backgrounds. With their advanced ages, they should have been moved quickly by their promoters rather than put in with sub-level opposition that didn’t match the talented fighters that they faced during their amateur days.

If the 29-year-old Yoka misses out on the Hrgovic fight,  it could take him years before he eventually works his way into position for a world title shot.

Canelo reveals why he lost to Bivol: “I couldn’t train like usual”11K Total Shares
Keith Thurman says Crawford & Spence holding all the belts hurts 147-lb division 4K Total Shares
Naoya Inoue Says He Will Become P-4-P Best By Unifying Bantamweight/Super-Bantam Divisions2K Total Shares
Eddie Hearn: Let’s do Bivol vs. Beterbiev next for undisputed, why do we have to wait?2K Total Shares