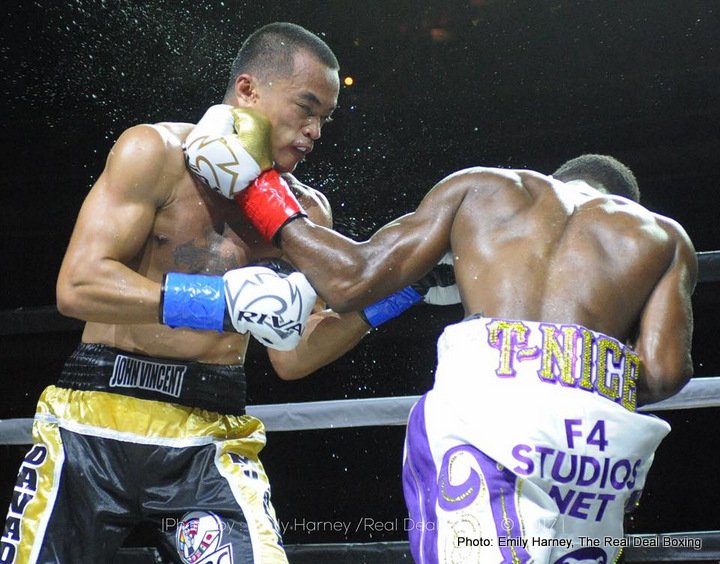 The 25-year-old Kahn-Clary, who won the North American Boxing Association (NABA) title in his last fight, used a stiff jab and solid defense to frustrate his opponent early in the fight, setting the pace to take a decisive scoring advantage.

Toka-Kahn came out firing in the fourth round, applying more pressure to take full command, and he never let up. Rapid fire punches by Toka-Kahn, thrown from all angles, repeatedly landed on his overmatched opponent. By the end of round seven it was clear that the end was near for Moralde and it came suddenly when Moralde couldn’t continue anymore.

“This was great tonight,” Holyfield commented about promoting his first show in Providence. “We want Toka to be our first world champion and this performance should put him in good position. It was very important to build his fanbase at home in Providence and we look forward to promoting here in the near future.”

“I’m not a one-punch fighter,” WBA No. 14-rated Toka explained. “I kept walking him down and hit him with some good body shots. I’m not going to call anybody out by name but I’m ready to fight anybody in my weight class.”

“This is such a good feeling. I came here but could have ended up anywhere. I’m truly blessed to be in Providence and have these great fans. I have a great team behind me. I want to fight the best to be the best, it’s the only way to make money and be recognized. I’m ready for anybody!”

The American debut of undefeated Italian cruiserweight Fabio “Stone Crusher” Turchi (13-0, 11 KOs) was a clinic in last night’s co-featured event against Demetrius Banks (9-4, 4 KOs), of Detroit. Turchi patiently applied constant pressure, methodically breaking down the game Banks and hurting his opponent with a flurry of punches in the third round. The end came when Banks failed to answer the bell for round five.

“I’m so happy,” Turchi remarked after the fight. “This was so emotional for me because it was the first time I fought in front of Evander. I’m happy with my performance but I think I could have done better”.

“I felt the heat from the Italian-American fans and I thank them for helping me sustain. I also want to thank The Real Deal Boxing. My next fight will be February 2 at home in Florence, for the European Union title.”

In the CBSSN televised opener, red-hot featherweight prospect made Irvin Gonzalez (8-0, 7 KOs) made the most of his national TV debut, switching freely from orthodox stance to southpaw and back throughout the fight, en route to a sensational third-round knockout of Colombian knockout artist Marlon Olea (13-2, 12 KOs). The lightning-quick Gonzalez, of Worcester, MA, consistently beat his opponent to the punch, and finished off Olea with a straight right to the body to keep his perfect pro record intact. Olea was fighting in the U.S. for the first time.

“Tonight, I showed that I’m a real fighter,” Gonzalez said after the fight. “I believe I’m a contender in my weight class. I’m going back to the drawing board with my coaches and 2018 is going to be my year.”

Local favorite Nick DeLomba (12-2, 2 KOs), representing nearby Cranston, RI, pleased his supportive crowd, registering a hard-fought victory by way of an eight-round unanimous decision versus Bronx junior welterweight Louis Cruz (12-4, 6 KOs) for the vacant Universal Boxing Federation (UBF) junior welterweight title. Cruz was penalized a one-point deduction in the fourth round for a low blow. Scores were 79-72 and 78-73 twice.

Philadelphia welterweight Poindexter “Savage” Knight (1-0, 1 KOs), a 2017 National Golden Gloves champion, had an auspicious pro debut, trapping Samuel Forjoe (0-2) in the corner right after the first bell. The gifted southpaw, a prized prospect for fans to keep an eye on, unloaded ten unanswered punches until referee Danny Schiavone halted the action at 1:03 of the opening round.

Sal Musumeci, CEO of The Real Deal Boxing: “We’re honored to be here in Rhode Island. So many champs come through here and we’re here for that reason and its great boxing fans. I’ve been promoting 20 years with more than 400 shows worldwide. I know where we want to go to places with people who appreciate boxing.”

“Evander and I got together to put together The Real Deal Boxing because we want the same shows, two warriors in the ring, and that’s what you’re going to see Friday night at The Stand. Thanks for accepting is here. Toka is a great inspiration. When I first heard his story, my COO (Eric Bentley) sad we need to sign him. He’s in a tough fight. Toka accepted the challenge because he believes he’ll be world champion.”

“Turchi is an undefeated cruiserweight who will grow into a heavyweight. An Italian heavyweight like the great Rocky Marciano who fought in providence so many times.”

“I guarantee on Friday night you’ll see the most competitive fights in Providence in many years.”

Evander Holyfield: “I’m honored to be here. A big part of me being a promoter is how can I help boxing? I started at eight, when I was told I’d be like Ali. I believed that, but I had to ask my mother (permission to box). I was a four-time heavyweight world champion, but I also had my ups and downs. I tell them (my fighters), if they listen and ask me for advice, I will tell them. The problems today with millennials is that there’s really nobody to tell them. Just ask me, I tell them.”

“I bring a lot to boxing, but I won’t say I will make my fighters champions. I will give them an opportunity to be champion. I had opportunities and never quit. If you set goals and you don’t quit, you’ll reach that goal. Correct your mistakes and don’t quit. These fighters need to believe in me but, more importantly, they need to believe in themselves. I can give them advice because I’ve done it. I’m on their side.”

Toka Kahn-Clary: “I want to thank Evander, Sal and everybody on my team for having me fight in my state. I also want to thank my manger, trainer and Dan Crotty. I’m happy to be here. Boxing isn’t easy, but it is the path I’ve chosen. I’m fighting here on national television, representing my city and state.”

“I’m going to put on a show December 1st. It’s not going to be easy but I’m going in the ring to give it my all. I can’t wait to fight!”

Seth DeRobbio, manager of Toka Kahn-Clary, Irvin Gonzalez, Nick DeLomba & Timmy Ramos:
“I want to thank Sal and Evander for giving Providence good fights. This is a great opportunity for Toka, who is fighting a 19-0 opponent, setting up a 2018 to be a big year for him. Hopefully, we’ll be bringing something very big to Providence, too. You won’t know who is going to win Friday night until the fights are over.”

Peter Manfredo, Sr., head trainer for Kahn-Clary: “I’d like to thank Evander, Seth, the whole crew (The Real Deal Boxing). When Seth mentioned signing Toka with Evander, I soon learned that they take care of their fighters, no BS. Listen to them and you’ll make it to the top.

“Toka Kahn-Clary is the best fighter I’ve ever had, I’ve had a lot of good ones. Toka is always in condition, he works hard and has an iron chin. He wants to be a legend and I’m going to do everything to help him.”

Fabio Turchi: “I’m really happy to be here. I want to thank Real Deal Boxing for having faith in me. I will try to do my best to put on a great show. The people here mean a lot to me and I want to make the Italian-Americans here in Providence proud of me.”

Nick DeLomba: I want to thank Evander for putting me on this card. I grew up watching his fights on video; he is my idol and I’m honored to be fighting on his card. I come to fight. My opponent is a tough fighter who’ll bring his best.”

Tickets starting at $45 are Now On Sale and can be purchased through www.TheRealDealBoxing.com and www.thestrandri.com.

Evander Holyfield, Hall of Famer, Real Deal Boxing:”There’s a lot of pressure fighting in a big fight for the first time at home. I remember my homecoming in Atlanta, back in 1985, and there were a lot of distractions. Everybody who knew my name showed up, most looking for free tickets. I was skeptical about ever fighting there again. Everybody’s different, though.”

“Toka may be our first world champion. He’s a very disciplined person who has been through a lot. I come from the ghetto but, when I heard his story, wow, I couldn’t believe his (life) was harder than mine.”

Toka-Kahn-Clary: (Toka became a father for the first time on Nov. 11, when his wife, Devanni, delivered a 7-pound girl, Adaline) “Now, I’m fighting for my family, not just Toka anymore.”

“I feel good. I had to have patience and faith in my craft to get here. If you keep working hard, doors will open, and when they do you have to jump right through. I want to win impressively, dominate the fight”

“I see a lot of top fighters in my weight class. I’m not going to name any until after this fight, but I have the talent to beat them.”

“I want to be recognized after I stop fighting, like Evander, who everybody knows, likes and respects.”

Peter Manfredo, Sr., Kahn-Clary’s head trainer: “Toka is a top prospect who is becoming a contender. A lot of fighters don’t even get to this point. This fight is a major opportunity to get him closer to where he wants to be, not just a world champion, but for his name to be remembered in boxing. He wants to be a legend. He has to remain focused because this is the first time he’ll have a big crowd behind him.”

Fabio Turchi (Italian Amateur Champion) “Everybody here has been great, very hospitable. It’s such a great honor for me to fight in America with its great boxing tradition. I want to have a great fight to be embraced by Americans, especially here in Rhode Island. It’s beautiful having so many Italians, that gives me and added push to win.”

Nick DeLomba: “This opportunity means the world to me because I’ll be showcasing my talents in front of my hometown fans. An impressive win will, hopefully, get me to the next level, in TV fights against bigger names.”

Evander Holyfield being interviewed at today’s open workout in Cranston, RI by the three network affiliates

A public weigh in will be held Thursday, starting at 3:30 p.m. ET (on scale at 4), at The Strand Ballroom and Theatre.