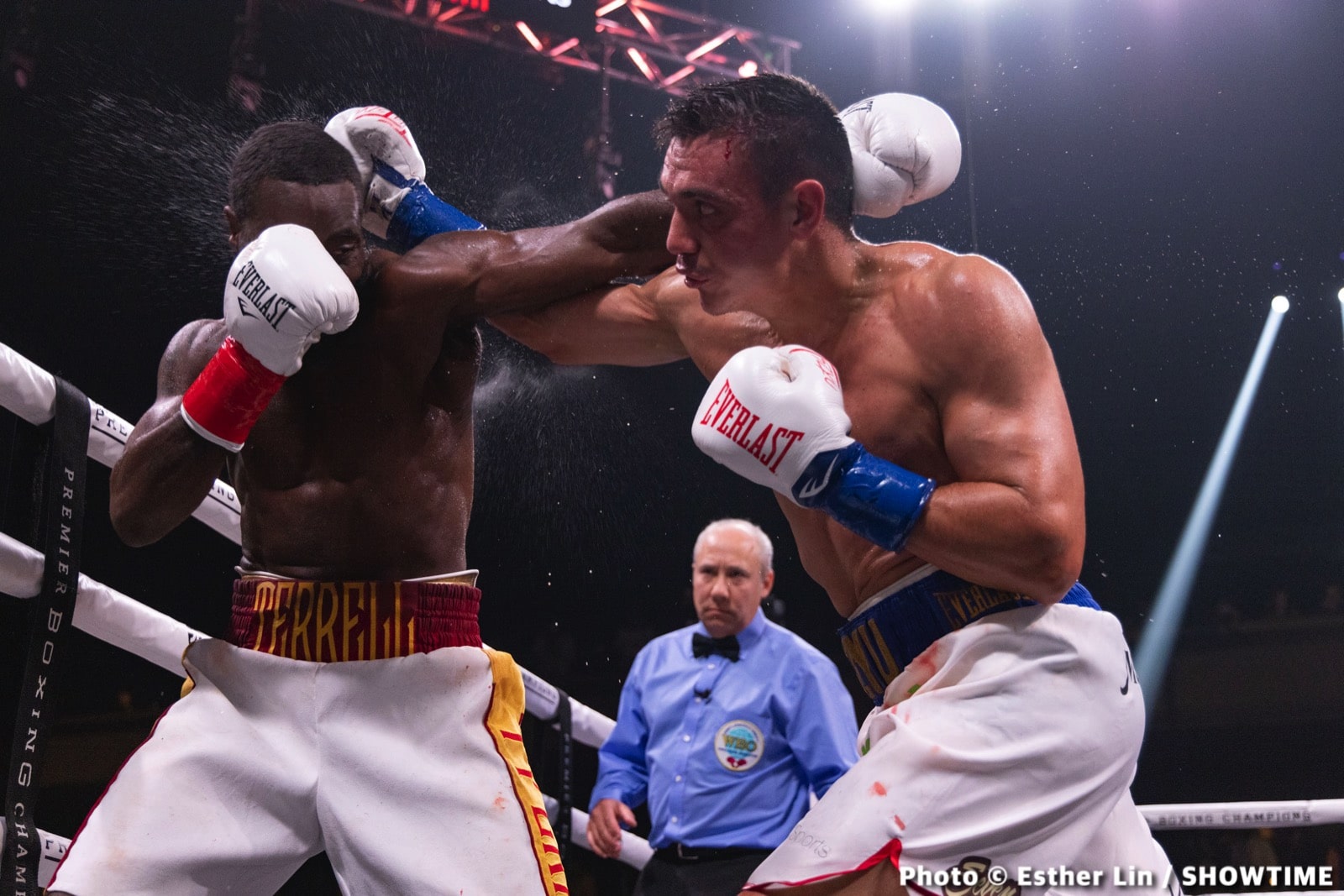 Light middleweight contender Tim Tszyu (21-0, 15 KOs) made his successful U.S debut on Saturday night with a 12 round unanimous decision victory over Terrell Gausha (22-3-1, 11 KOs) at The Armory in Minneapolis, Minnesota.

The 34-year-old Gausha initially gave the less experienced Tszyu problems right off the bat, knocking him down with a right to the head in the opening round.

This wasn’t a fluke knockdown. It was legit, as the 27-year-old Tszyu walked right into the shot from the 2012 U.S Olympian Gausha and was dropped.

Tszyu continued to struggle in rounds two and three, getting hit repeatedly by Gausha when he was trying to land his power shots.

However, after the third round, Tszyu’s power shots to the body resulted in Gausha retreating to the ropes, where he spent long stretches of the fight, covering up like a dutiful sparring partner rather than a fighter trying to win.

Judging by tonight’s performance from Tszyu, he would be better suited to delay his title shot for another two or three years because he’s not ready to fight B-level fighters like Charlo and Castano. Those guys aren’t elite, but they’re good enough to give the still raw Tszyu massive problems.

The 2012 Olympian Gausha (22-2-1, 11 KOs) will be a good test for Tszyu to show his readiness to challenge the winner of the May 14th contest between junior middleweight champions Brian Castano and Jermell Charlo.

“I think that fight cemented myself. I took on a former world champion and I didn’t lose a round and I got him out by the eighth,” said Tszyu to Showtime about his win over Jeff Horn.

“I’m super proud what my dad did, but at the same time, this is my career and I always wanted to step away from that shadow and not just be known as Kostya Tszyu’s son, but I want to be known as Tim Tszyu.

“It’s taken years and years of work. 100%,” said Tszyu on where he’s at right now at age 27 isn’t where he’ll be later when he develops more as a fighter.

“There’s so much to learn. I feel like I’m getting better with each fight. It’s an evolution and with each fight, you get better and better. There are plenty of big fights to be made. It’s quite exciting.

“I’m at a good age at 27-years-old and I still haven’t reached my peak. There’s so much to learn and so much to know that it’s a neverending story. This is a new chapter and it begins now,” said Tszyu.

“When Showtime is putting Tim Tszyu on, they’re not just putting him on to put him on, they plan on doing business with him in the future. That means a championship fights against a Castano,” said Dan Rafael to Chris Mannix on Boxing.

“He has the same mentality as many of the British fighters had. Whether it was Joe Calzaghe or Ricky Hatton or Tyson Fury or any number of these British top guys that ultimately made it over to the United States to make their names.

“Tim Tszyu saw what his father [Kostya] was able to do, and now he’s at his stage in his career where he can come here and do the same thing. I think the American fans are going to like him.

“He’s got a fun style to watch, and in my opinion, he’s got charisma to him. He’s got a little swagger about him and I kind of like that,” said Rafael about Tszyu.

“I agree. I think the American boxing fans are going to like him a lot, and I think he’s going to have a successful career,” said Mannix in echoing Rafael’s comments about the 27-year-old Tszyu.

“He’s had a very limited amateur background, which worries me a little bit, but what he’s shown in the professional ranks against guys like Horn, Hogan, and Inoue, if he looks that way against Gausha, we’re going to have something here in Tim Tszyu,” said Mannix.

Tim Tszyu steps up tonight in an important fight against well-seasoned professional Terrell Gausha in 12 round fight on Showtime Boxing at the Armory, Minneapolis. This will be the American debut for the #1 WBO ranked 154-lb contender Tszyu (20-0, 15 KOs). The card begins at 9 pm ET live on Showtime.

The Australian Tszyu is the son of boxing legend Kostya Tszyu, a former undisputed light-welterweight champion in the early 2000s, and he’s trying to blaze his own path to greatness.