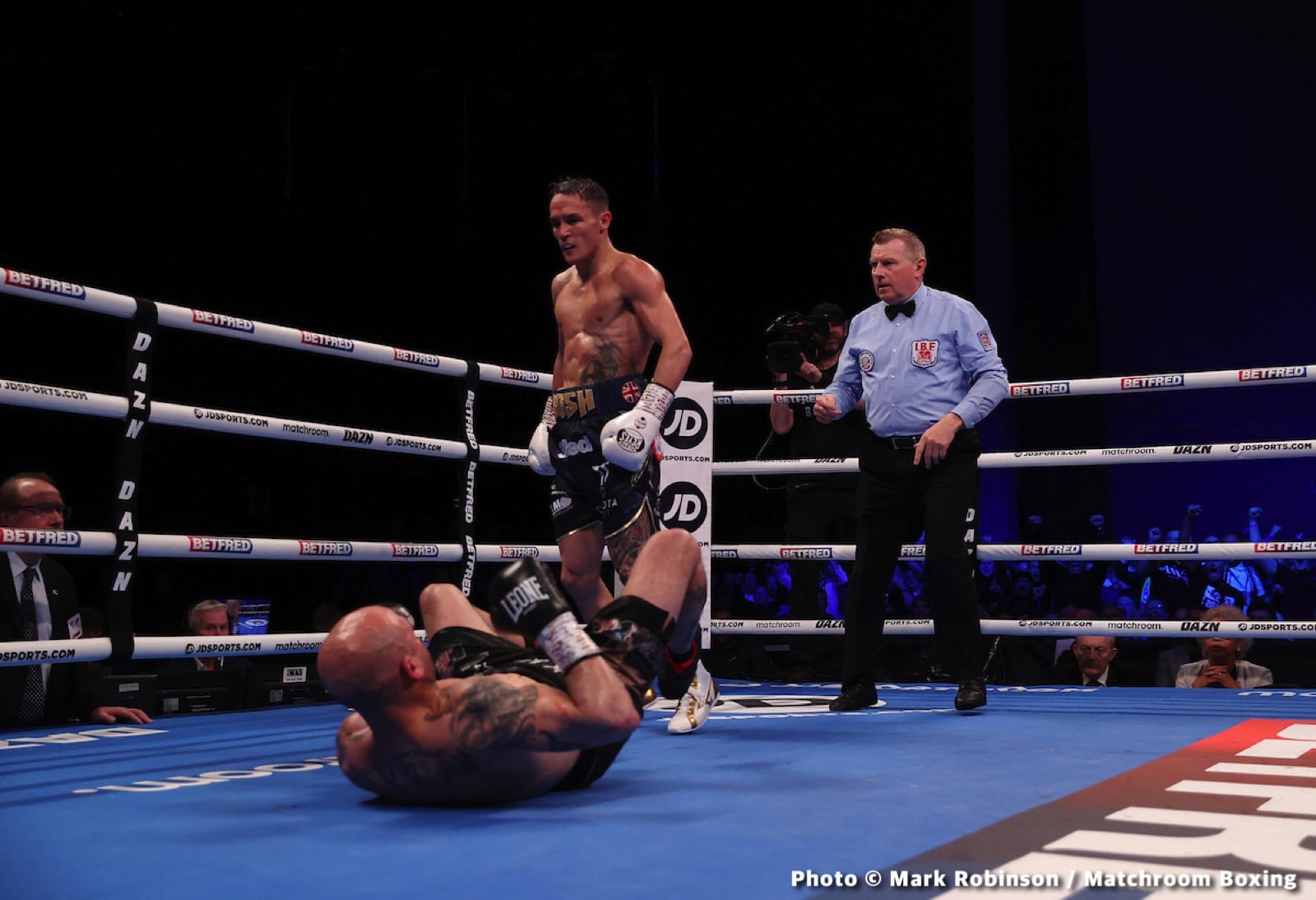 Josh Warrington (31-1-1, 8 KOs) looked like a man possessed with the way he broke down and overwhelmed IBF featherweight champion Kiko Martinez (43-11-2, 30 KOs) to win a seventh-round knockout on Saturday night in front of a huge crowd at the First Direct Arena in Leeds, England.

The end came in the seventh round when Warrington overwhelmed the bloody & hurt Martinez with a storm of fierce punches that caused him to retreat to the ropes. 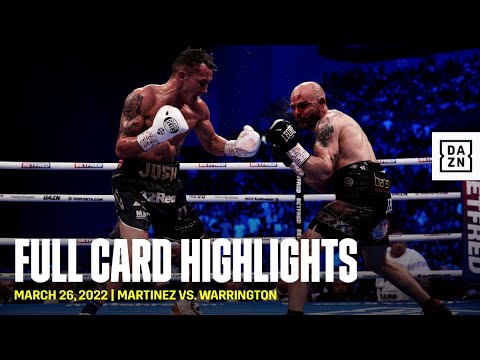 From there, Warrington threw nonstop heavy artillery until the referee Marcus McDonnell stepped in and waved it off. Martinez wasn’t throwing anything back, leaving the referee McDonnel with no choice but to stop the contest.

The time of the stoppage was at 2:12 of the seventh round. Martinez was knocked down in the first round from a hard left to the head by Warrington. Kiko suffered a cut over his left eye in the round from a punch.

After the round ended, Martinez hit Warrington with a shot well after the bell sounded. It looked like a move of frustration on Martinez’s part because he had taken a lot of punishment.

After the fight, Warrington was noncommital about who he’ll fight next. His promoter Eddie Hearn obviously would have liked for Warrington to have called out WBA champion Leigh Wood, but he didn’t mention him.

“I feel like this is a gift to Josh Warrington, who is getting a chance to get his [IBF featherweight] belt back from Kiko Martinez,” said Chris Mannix on Boxing. “Martinez, I don’t know how much he has left.

“I think he gave everything else that he had in his knockout win over Kid Galahad. Now, he’s presented to Josh Warrington in a weird way, the same way like Charles Martin was once presented to Anthony Joshua. ‘Here’s the title.'”

“It’s a fair point, but you still got to fight the fight. I’m not saying Kiko Martinez is going to win,” said Dan Rafael. “Let me make this point because it actually struck me because I happened to see the odds on the fight the other day.

“Maybe you do bet on Kiko because when they fought a few years ago [in 2017], it was a very close fight. Warrington got the victory, but if my memory serves, it was a split or majority decision. It wasn’t a lights-out decision.

“Now move past the recent past. You mention the fight that Kiko got his title back against in Kid Galahad. A massive underdog [Kiko], hand-picked to go to Galahad’s hometown [Sheffield] for his homecoming defense. He didn’t just win, he destroyed Galahad [by a sixth-round knockout].

“Two crushing knockdowns, and the second one being the devastating knockdown. He [Kiko] Just destroyed him. That’s a confidence-builder right there. This was the fight of his life and he ends up winning in a massively unexpected manner.

“Now you take a look at Warrington. He gives up the IBF featherweight title that now Kiko Martinez has and he gets utterly laid to waste by Mauricio Lara [by a ninth-round knockout in February 2021].

“Before that fight, he [Lara] was completely obscure and unknown. Again, hand-picked. Bring him over from South America and put him in Warrington’s home and gets destroyed.

“Then he [Lara] comes back in the rematch and it only goes two rounds, but Warrington did not look very good in those two rounds. I went back and watched that a couple of days ago, and I feel like if there wasn’t a head-butt and that fight goes on, Warrington is in another heap of trouble.”

“I feel like a lot of guys that fight Lara are going to be in trouble,” said Mannix. “He’s just a beast.”