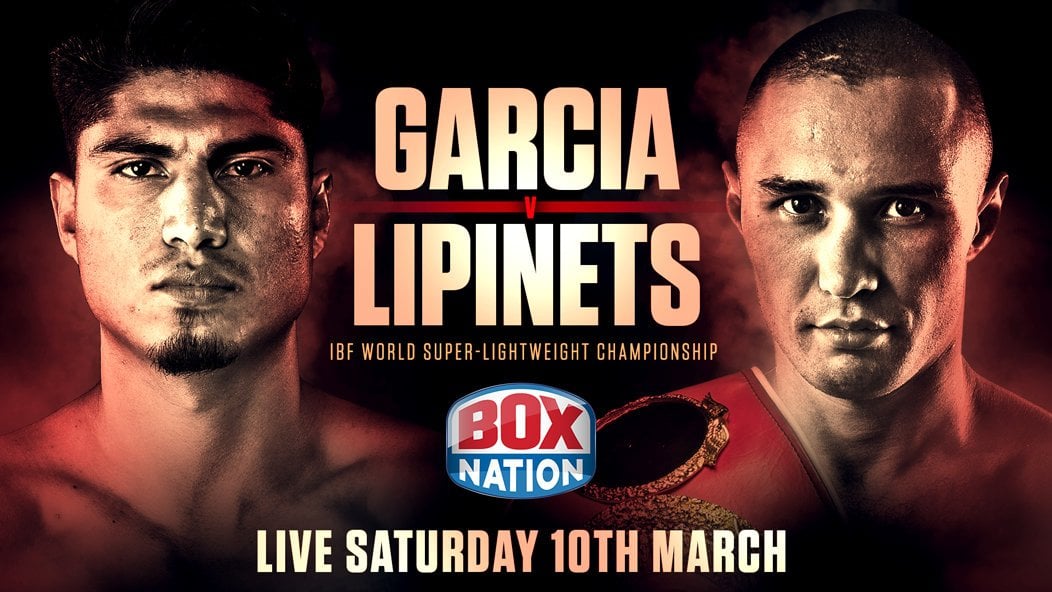 30-year-old Garcia, with a record of 37 fights unbeaten with 30 KOs, is regarded amongst the best pound-for-pound fighters around and will be looking to add Lipinets IBF light-welterweight crown to his collection.

The Kazakh born boxer however will be in no mood to surrender his championship belt and has dismissed all 13 of his opponents, with ten of those failing to hear the final bell.

Californian Garcia enjoyed an impressive 2017 by scoring a highlight reel knockout of Dejan Zlaticanin to win the WBC lightweight world title in January before dominating four-division champion Adrien Broner on his way to a unanimous decision in July.

With a win, Garcia would become only the third fighter in modern history to become champion at 126, 130, 135 and 140-pounds, joining future Hall of Famers Juan Manuel Marquez and Manny Pacquiao.

Taking place at the Freeman Coliseum in San Antonio, Garcia, who hails from a famous boxing family, will be looking to do them proud this weekend.

“It is a dream to have the opportunity to become a four-division world champion,” Garcia said. “San Antonio has some of the greatest boxing fans in the country, including some key supporters of my Robert Garcia Boxing Academy family. Since my last fight, I have stayed in the gym. I can’t wait to give the fans in Texas and those watching at home another great performance.”

28-year-old Lipinets is a genuine 140-pounder and he will be hoping that the leap up in weight will be too much for Garcia.

Trained by Buddy McGirt, Lipinets captured his world title in his last fight by defeating Akihiro Kondo via a unanimous decision in November.

He is well aware a victory over the accomplished Garcia will cement his place as a top-level operator.

“Getting the title is one thing, but keeping the title is a more difficult task,” said Lipinets. “I’m not about to give it away to anybody. No disrespect to Mikey Garcia or anybody else out there, but I’m keeping my title. Beating Mikey Garcia will put me in the elite of boxing where I believe I belong. I’m happy my team was able to put this great fight together. I can promise you this won’t be a snoozer. It’s going to be an action-packed fight for sure.”

Jim McMunn, BoxNation Managing Director, said: “Mikey Garcia has proved that he is one of the most exciting and best fighters around today. He has an extremely high skill-set and BoxNation subscribers will have the opportunity to see him put that into action this Saturday night against the undefeated IBF world champion Sergey Lipinets. Lipinets has impressed in his early career and he knows a victory will propel him to the very top of the 140-pound division. It will be an action-packed fight, with Garcia aiming to become a four-weight world champion exclusively live on BoxNation.”

An exciting night of undercard action comes to Freeman Coliseum in San Antonio on Saturday, March 10 featuring 2016 Olympians and rising prospects entering the ring for the Premier Boxing Champions event.

Tickets will be on sale Friday for the world title showdown between unbeaten three-division world champion Mikey Garcia and undefeated junior welterweight world champion Sergey Lipinets that takes place on Saturday, March 10 live on SHOWTIME from the Freeman Coliseum in San Antonio and presented by Premier Boxing Champions.

Fans who purchased tickets for the originally scheduled event at the Alamodome on February 10 will have a 34-hour early access window beginning today at 12 p.m. CT until Thursday, January 25 at 10 p.m. CT to purchase their new seats.

The SHOWTIME CHAMPIONSHIP BOXING co-feature will see two-division world champion Rances Barthelemy taking on Kiryl Relikh in a rematch of their thrilling fight last May, this time for the vacant WBA 140-pound world title. Action inside the Freeman Coliseum begins at 4 p.m. CT.