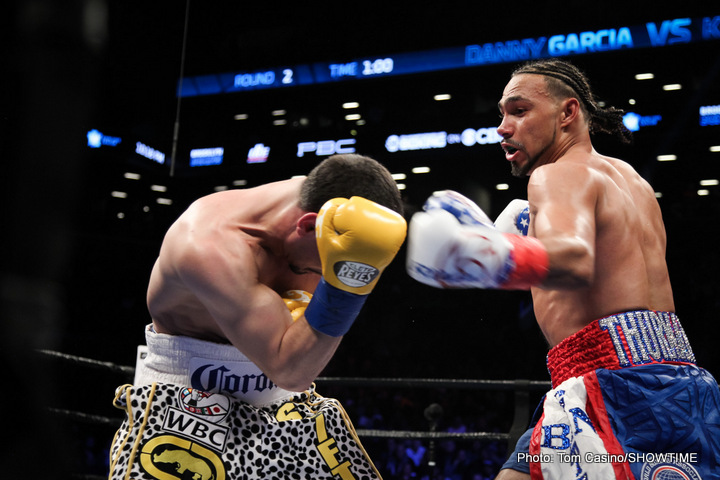 – The peak audience for Saturday’s SHOWTIME CHAMPIONSHIP BOXING ON CBS broadcast of Thurman vs. Garcia reached 5.1 million viewers, the largest audience for a primetime boxing broadcast since 1998 and up 30 percent over last June’s SHOWTIME CHAMPIONSHIP BOXING ON CBS primetime broadcast of Thurman vs. Porter. Last Saturday’s peak audience came during the final round of the 12-round main event bout.

– The peak audience was the second highest for boxing on broadcast television since 1998 (including non-primetime), behind only August 2016’s Premier Boxing Champions Errol Spence Jr. vs. Leonard Bundu event on NBC which aired immediately following coverage of the men’s gold medal basketball game at the Rio Olympics. The peak audience for that boxing program came in the opening minutes of the broadcast.

– The average viewership for the main event of Saturday’s SHOWTIME CHAMPIONSHIP BOXING ON CBS broadcast was 3.74 million viewers, up 19 percent over June’s Thurman vs. Porter main event average.

– The average viewership for Saturday’s entire broadcast (from 9p – 11:15p ET), which included the co-feature of Erickson Lubin vs. Jorge Coda, was 3.1 million viewers, ranking as the third most watched live boxing event on broadcast television since 1998. The broadcast average was 83 percent higher than Saturday’s NBA Primetime Game on ABC (L.A. Clippers vs. Chicago Bulls; 1.7 million). The only boxing broadcasts with higher average viewership were the Aug. 2016 Spence Jr. vs. Bundu broadcast and the anticipated debut of Premier Boxing Champions, Thurman vs. Guerrero in 2015.

– Thurman vs. Garcia was the No. 1 most talked about broadcast television event on social media platforms throughout the day on Saturday, according to Nielsen Social Guide which pulls from Facebook and Twitter.

– The #ThurmanGarcia hashtag was used 22K times on Saturday night and trended No. 1 on Twitter during the broadcast.

This live broadcast of the PBC Showtime Championship Boxing on CBS, placed CBS as the No. 1 network in prime time on Saturday night, according to Nielsen overnight ratings.

On Saturday, it was also announced the WBC Welterweight Eliminator between former 147-pound champions Andre Berto and Shawn Porter will take place Saturday, April 22 at Barclays Center. The winner of this Berto-Porter matchup becomes the mandatory challenger of Thurman.

CBS Sports Network will air an encore presentation of Saturday’s razor-close welterweight unification between Keith Thurman and Danny Garcia tonight/Monday at 10 p.m. ET. Thurman and Garcia landed within five punches of each other across all 12 rounds of their showdown for the WBA and WBC 147-pound crowns, with Thurman narrowly edging Garcia to unify the division via split decision in front of a record crowd at Barclays Center in Brooklyn.

Monday’s encore presentation of SHOWTIME CHAMPIONSHIP BOXING on CBS, presented by Premier Boxing Champions, will also feature Erickson Lubin’s one-punch KO of Jorge Cota in a WBC 154-pound title eliminator, a victory which sets the 21-year-old on a path to become the youngest world champion in boxing today.

Thurman vs. Garcia will be available commercial free to SHOWTIME subscribers next week. This offering, including bonus coverage from between rounds of the main event, will be available on SHOWTIME ON DEMAND®, SHOWTIME ANYTIME® and on the SHOWTIME Streaming Service.

The entire two-fight broadcast will also be available on CBS ALL ACCESS.