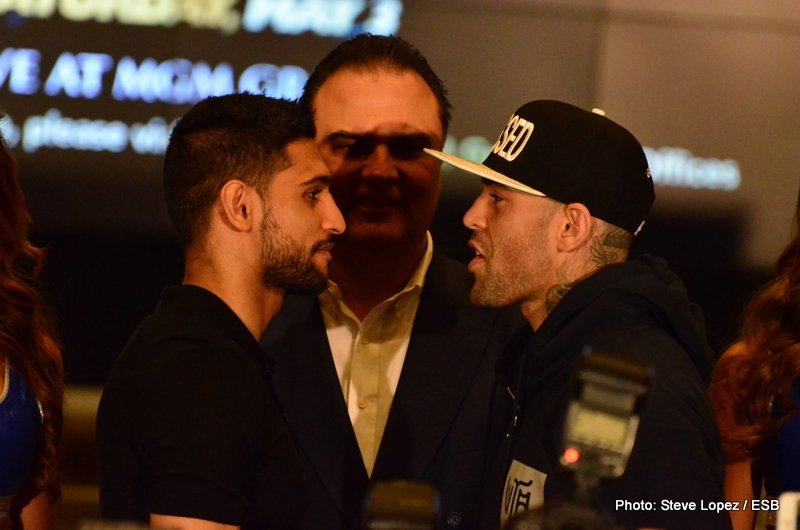 Such were the chants echoed through the MGM Grand’s lobby that were heard as Marcos Maidana took the stage for his grand arrival.

Was this a soccer match or a boxing event’s fight week kickoff?

Las Vegas, NV is once again the boxing spotlight. Two and a half weeks after headlining a Welterweight showdown between the anticipated rematch of Pacquiao and Bradley, the boxing world’s attention turns to The Moment: Mayweather Vs. Maidana.

Although there are no top Mexican fighters headlining the card for this Cinco de Mayo weekend, the boxing world’s attention will be directed to yet another Cinco de Mayweather event.

Tuesday marked the beginning of fight week festivities for this WBC/WBA Welterweight unification between boxing’s Pound-for-Pound best Floyd Mayweather, Jr. and one of Argentina’s current boxing hurricanes, Marcos Maidana. As always, the MGM Grand’s lobby was jam-packed with fight fans wanting to get a glimpse of the headlining fighters.

Country pride was clearly evident as Amir Khan had his share of UK followers chanting his name. Even more powerful was the Argentine presence.

Here are some notable quotes from each fighter’s arrival as well as fight predictions from undercard fighters on the main event on 05/03/2014.

Day 2 continues with the Final Press conference for the main event: Mayweather Vs. Maidana.

“We put in the work. I’m confident in my abilities and we trained our butts off for this fight.”

“We know what Adrien Broner brings to the table and we’re ready to shock the world. We’re ready to give the fans a great fight and a great night.”

“I’m going to let my fists do the talking, but I know pretty much everyone in here in some way is rooting for me. So, I’m going to take that into the fight.”

“I ain’t coming to talk no shit. I’m coming to beat his ass and leave a shit stain.”

Thoughts on being on Mayweather’s undercard: “It’s amazing, man. He’s going to do his thing, I’m going to do mine. Feeling good and looking better and getting paid for it…big bucks.”

Thoughts on loss to Maidana and what to tell Mayweather if he were in his corner: “ Hey, I’m going to cut you short. You just said some bullshit. You just told me to tell my big brother some shit who’s undefeated. He needs to tell me something! I’m the one who took a loss, you damn fool.”

“I love being the underdog. I’ve been the underdog all my life. I know there’s a lot of people out there who feel I’m underrated.”

Prediction on Mayweather-Maidana: “Maidana always aggressive. He can punch. Floyd is too slick. Maidana’s going to have to catch up.”

“It’s going to be a big event. It’s going to be my first time fighting in the MGM Grand Arena. I’ve fought in Vegas a few times before but not at the MGM. We worked very hard for this fight. I’m going to be ready.”
“I know it’s on a big card: Floyd Mayweather is fighting Maidana. I wish them all the very best. It’s going to be a great card. I’m looking forward to the fight agaist Luis Collazo.”
“I’m been training very hard at this new weight. 147. I feel very strong. I’m ready to fight.”

Thoughts on Collazo’s KO victory over Ortiz: “Luis Collazo is the guy in front of me come Saturday night. I’m going to be ready for him. I see him as a big threat. He’s a strong fighter. He’s strong. He had a great win against Victor Ortiz knocking him out in the second round.”

Prediction on Mayweather-Maidana: “It’s a tought fight. I fought Maidana. I beat Maidana. It was a great fight. Mayweather, he seems untouchable. No one can get to him. It’s going to be a good, tough fight to call. At the end of the day, both guys are great fighters. I respect both guys. I give it a 50-50 fight. Anything can happen in boxing.”

“Beating Floyd Mayweather will be my moment. Mayweather has a lot of riches and guarantees, but I have the support of the people.”

“First off, I want to thank the fans for coming out here and showing support. You guys have been brilliant for 18 years. I take my hat off to you guys. Five days from another big event. Mayweather Promotions, Golden Boy Promotions. I couldn’t ask for a better event. It’s about two fighters coming together and giving the people what they want to see.”

“The key to where I’m at today is being very, very intelligent, being very, very smart. Taking my time, keeping my composure. Coming up with brilliant game plans. Maidana is a guy I can’t overlook. He got here somehow, someway. He’s dedicated, he’s hungry. He’s got a good knockout ratio. So, when you bring those two together, you get nothing buy excitement.”

Thoughts on the promotion: “It’s about great companies coming together, working together, doing something positive. MGM Grand properties…I couldn’t choose a better place to fight in the world. Golden Boy Promotions, Golden Boy Promotions…we work hand in hand. Day in and day out. To give the people what they want to see. It’s champion versus champion, country versus country. That’s what the people want to see.”