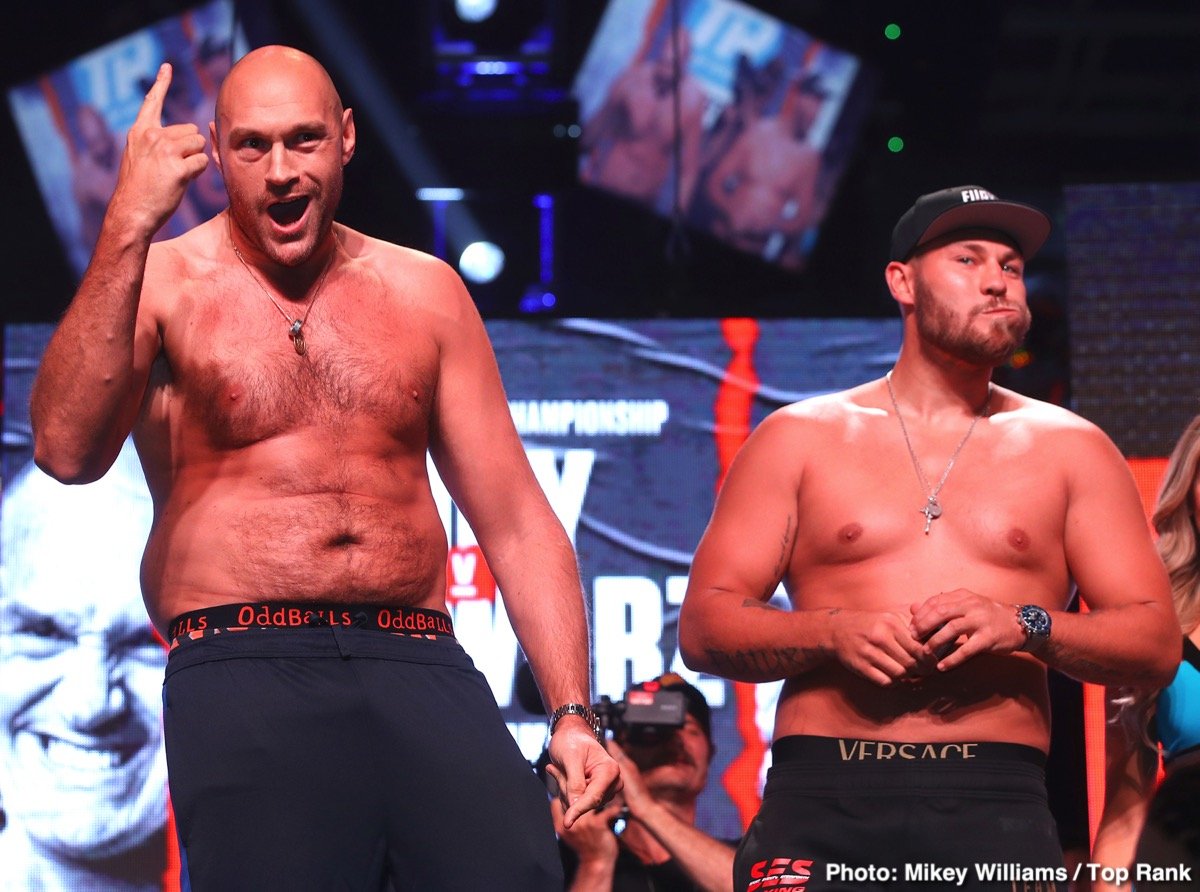 This Saturday night on ESPN+ Tyson Fury makes his Las Vegas debut as the Gypsy King faces Tom Schwarz at the MGM Grand Garden Arena. Earlier in the afternoon on Saturday the World Boxing Super Series returns with what should be a quality doubleheader of action at the cruiserweight division. In the main event of the Semifinals, Marius Briedis takes on Krzysztof Glowacki and Andrew Tabiti versus Yuniel Dorticos in the co-feature on DAZN. All and all it shapes up to be a pretty good weekend that should produce more two-way action that last week’s fights.

Let’s begin with the self proclaimed ‘Gypsy King’ as his makes his return to the ring for the first time since December. Fury has his sights set high in hopes of making a big splash to kickoff the first of five fights in a contract freshly inked with Top Rank and ESPN. Since there’s not much to talk about his untested opponent Schwarz will stick to Fury mostly. By now the majority of boxing folks already know Tyson’s back story pertaining to mental health and the roller coaster of a life outside and inside the squared-circle.

From reaching the pinnacle of a boxing career by beating a 10-year reigning heavyweight champion in Wladimir Klitschko in Germany, to diving head first in to a downward spiral of depression and drugs. Somehow Fury rose up out of a thick layer of mental illness and got back on his feet, in the process losing 100+ pounds and becoming a positive example for other struggling as well.

Not only did he recover from his inner demons, Fury made a helluva return to the top of the division. Back to back summer tune-ups led to a matchup with WBC champion Deontay Wilder. Fury was cruising along seemingly up on the scorecards until the back third of the contest. Fury was dropped by a jab/right combo but didn’t seem all that hurt and was able to shake it off by winning rounds 10 and 11. Even the casuals of the sport were shocked to see him beat the count after Wilder dropped Fury with a flush right hand followed up with a scrapping left hook as Tyson lay motionless on the canvas for a few seconds. The determination and straight up balls it took to not only get up or survive, but to finish the 12th on his feet firing back at Wilder is nearly unbelievable.

This podcaster is happy Fury got back on his grind at the top of the year returning back to training. A fully focused and trimmer Fury is a nightmare matchup style wise for every single heavy in the top-10. As far as which Fury we can expect this Saturday will probably come down to a few things. First and foremost a lot of depends on how much Schwarz brings to the table and if he can really push Fury to come out of his shell. Tom likes to attack the body with the right hands especially, also throwing that same right upstairs as an overhand.

It’s tough to tell how good Schwarz’s jab is because of the lack of resume. Judging by watching a few different rounds of a couple of his fights, I’m guessing he’s pretty much custom made for Fury. Schwarz may be able to do some damage or at least good work on the inside but it’s hard to see him have much of any success. Could Schwarz win a round or two, maybe but it’s likely it would come in the very first round. Or Fury could be running away with the fight and end up showboating which may give Schwarz a round by default.

Look for Tyson to stay on his jab and pivot game for the opening frames as he gets comfortable and measures Schwarz some. Soon after Fury will open up more with right hands and combination punching, it’s just a matter of how it ends.

My Official Prediction is Tyson Fury by Unanimous Decision.

The first fight of a WBSS Semis double-dip will be Andrew Tabiti against Yuniel Dorticos. Tabiti will play the part of the boxer looking to stay at range and control distance, whereas Dorticos will be looking for a good tear-up. That’s why this hack-of-scribe is so interested with both of these matchups on paper. Something’s got to give either Dorticos lands a haymaker or Tabiti catches him with flush shots on the way inside. It’s very doubtful that Yuniel will attempt to use his almost 4-inch reach advantage but his length could still pay dividends during exchanges. Something of note, Tabiti did take a picture with Drake to add to his curse of athletes. Dorticos will have plenty of moments and could land a one-punch knockout. Beyond the rough patches look for Tabiti to win with skill and a good set of whiskers.

My Official Prediction is Andrew Tabiti by Split-Decision

Marius Briedis and Krzysztof Glowacki do battle in what is another pressure fighter versus outside boxer. Both men have only one loss and by coincidence it came from the former undisputed Cruiserweight Oleksandr Usyk. Briedis’s fight with Usyk was much closer and more entertaining than Glowacki’s meeting. Following the Usyk playbook Briedis would be wise to keep his jab pumping and use lateral movement. That said Briedis doesn’t have the same reach or overall skill defensively as Usyk. Injuries and inconsistencies have plagued Briedis at times so he will have to be sharp to deal with Glowacki’s will. Glowacki is a guy that will keep pushing forward and lose rounds only to score a few knockdowns in return. If the ‘real’ Briedis shows up he should win 8-4, but it won’t come easy and he will most likely have to recover from getting buzzed by a looping Glowacki punch.

My Official Prediction is Marius Briedis by Majority-Decision.