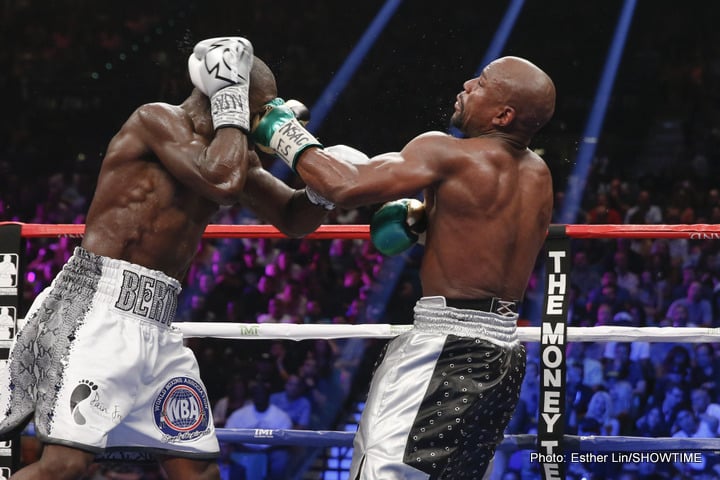 On this day in 1964, in Norfolk, Virginia, Pernell Whitaker was born. Known today as one of the finest defensive fighters in the history of the sport – or arguably as the best-ever – the gifted southpaw achieved plenty as both an amateur and a pro boxer.

Winning a silver medal at the 1982 World Amateur Championships, Whitaker, who was soon given the nickname of “Sweet Pea” due to his slick skills, went one better and captured gold at The Pan American games the following year. Then, capping off a superb amateur career, Whitaker, as part of the celebrated U.S team of 1984, won gold at the Los Angeles Olympics.

Naturally a pro career followed and, working with George Benton and Lou Duva, Whitaker, aged 19, had his debut, at Madison Square Garden, in November of ’84.

After sweeping to a 15-0 record – beating during this time former world champion Roger Mayweather – Whitaker challenged for his first world title. A shameless robbery later, to defending WBC lightweight ruler Jose Luis Ramirez, who somehow retained his belt with a split decision that was widely criticised, Whitaker had lost his unbeaten record. However, the classy contender won over the hearts and minds of the public who knew he had been badly treated by the judges.

The rematch came just over a year later, by which time Whitaker had beaten Greg Haugen to capture the IBF crown. Beating Ramirez with some ease in August of 1989 (with one judge awarding “Sweet Pea” every single round), Whitaker added the WBC belt to his IBF and he was soon recognised as the pound-for-pound best in the sport. Fine fighters such as Azumah Nelson, Freddie Pendleton and Louie Lomeli were bested, while Whitaker also defeated Juan Nazario – in a rare first-round KO – to add the WBA belt to his lightweight collection.

Then came a move up to light-welterweight, then to welterweight and even as far up as light-middleweight; Whiatker winning world titles in each additional weight-class. Along the way, Whitaker met such big names as James “Buddy” McGirt (twice, both points wins), Julio Cesar Chavez (in a “draw” of a fight that was condemned even more widely than the first Ramirez result had been), Julio Cesar Vazquez (a points win up at light-middle, for the WBA belt) and Oscar De La Hoya (yet another controversial moment from Whitaker’s career, this points defeat also being questioned by many).

Long before the loss to the new “Golden Boy,” Whitaker had more than earned his place amongst the greats yet, like so many other special fighters, Whitaker carried on too long. A brave points defeat to the hard-hitting Felix Trinidad in early 1999 was Whitaker’s last title fight; while his fourth-round TKO defeat at the hands of Carlos Bojorquez two years later was his final ring appearance – this sole stoppage loss on Whitaker’s record coming due to a broken clavicle.

Retiring with a fine 40-4-1(17) record, Whitaker became a trainer himself. Today, most fans and plenty of experts point to the unbeaten Floyd Mayweather Junior when asked who they think is the finest defensive fighter of all-time. But Whitaker cannot be too far behind, surely. Indeed, just which fighter would get the vote as the defensive best in history? The masterful Willie Pep, with his Will o’ the Wisp moves, is one of the old-timer’s favourites when it comes to being able to hit and not get hit (even today, the myth that he once won a round without throwing a single punch lives on!). Argentine master Nicolino Locche is revered as a boxer opponents could scarcely land a glove on. But Whitaker, who was stopped just once, due to a freaky injury, may have been the best of the lot as far as defensive prowess goes.

One man who worked with Whitaker for ten years is trainer Ronnie Shields, and he recently told this writer how he feels the man known as “Sweet Pea” is deserving of recognition as the finest defensive practitioner of The Sweet Science.

“Pernell was born with the reflexes he had. You cannot teach reflexes. He had so much natural ability,” Shields says.

“The way he would move his body and his feet; he would turn one way and practice throwing a counter punch from that stance, and then he would turn another way. He would never watch films of an opponent. I would study the films and then he’d ask me what the guy’s best punch was; what the guy did best in general. Then he’d go away and work on what I’d told him – he’d figure out which moves, which turns, would work best against the guy‘s best punch. He’d practice over and over, on which punch would work best as a counter against what the guy was going to do. Pernell is arguably the best defensive fighter in history.

“And Pernell loved to spar He loved it. He’d spar hard and heavy, too. Pernell liked to spar with bigger guys than himself, because it was too easy for him with guys his own size. He’d send a guy home if he was unable to push him, to make him work. He sparred with fellow champions, such as Meldrick Taylor and Livingstone Bramble. Mostly, he would work on his defence; he would practice his best moves whilst sparring.

“The thing was, he wanted to be the best Pound-for-Pound fighter in the world and stay at the top. And he said to do that he would have to make sure he worked harder than anyone else. He always told me to push him; he never wanted me to go at all easy on him. For all the natural talent and skill he had, he never relied on just that. Whitaker was one of the hardest working fighters I’ve ever known.”