Crawford wants the fight to take place in Omaha, Nebraska, but duBoef is talking about staging it in a studio in Las Vegas.

For the 32-year-old Crawford, this will be his first fight in 2020 since defending his WBO belt against fellow Top Rank fighter Egidijus Kavaliauskas last December in a 9th round stoppage.

That was a more challenging than expected fight for Crawford, with Kavaliauskas dropping him once and hitting him with many blistering shots. Although Kavaliauskas didn’t get credit for the knockdown by the referee, it is evident to all that Crawford was dropped.

Mistakes happen, but Crawford can’t afford to get hurt against a puncher like Brook because he’s a great finisher, unlike Kavaliauskas.

“We’re having advanced conversations with Brook,” duBoef said to skysports.com. “It makes sense for both fighters. We’re eyeing a November date if it can get done.

“November 14 is earmarked as the date. The location, as of now, is Las Vegas in a studio-type environment.” 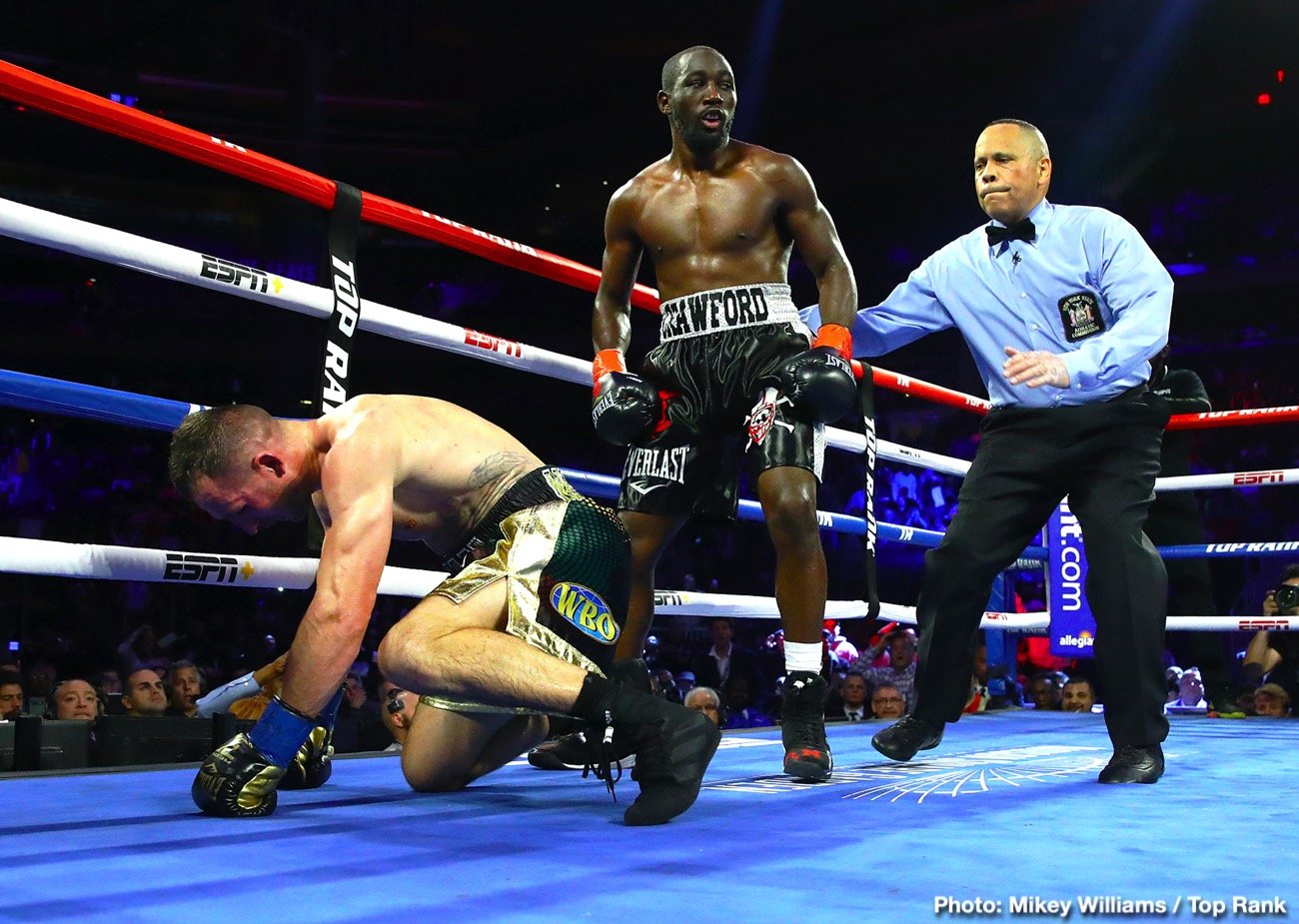 Fighting Brook certainly makes sense for Crawford, who doesn’t have many options available to him. He’d like to fight the Premier Boxing Champions welterweights. Still, none of them have shown interest aside from IBF/WBC 147-lb champion Errol Spence Jr, who is already scheduled to defend his titles against Danny Garcia on November 21.

With no options available to him, Crawford is taking on the best available welterweight in 34-year old Brook. Despite Brook’s history of injuries and the long period since he’s fought at 147, he’s still a risky opponent for Crawford.

Does Brook have enough left to beat Crawford?

We know a prime version of Brook would have an excellent chance of beating Crawford, but can a weight-drained, shop-worn Kell do the job?

Brook’s inactivity and the problems that he’ll be confronting in trying to get down to 147 might be enough for Crawford to win. Kell hasn’t fought at 147 since 2017 for his fight against Errol Spence, and he was weight drained for that match-up. Since then, Brook has been fighting at 154, and he’s comfortable in that weight division.

It’s not going to be easy for Brook to drain down to 147, as he’s not a spring chicken anymore, and he’s also not been fighting a lot since his loss to Spence. The opposition that Brook has fought has been mediocre at best, but Crawford has been facing weak opposition himself, and he’s been doing it a lot longer than Brook.

Given Crawford’s lack of experience against the elite-level fighters during his career, you can’t rule out a win for Brook.

Brook can punch, and he’s got a lot of boxing skills going for him. No one knows how good Crawford is because his 12-year resume is thin on talented fighters. He’s won a lot of titles during his career, but he picked up the belts against these guys:

Even in their primes, none of those fighters could compete with the top guys in this era. Crawford has picked up belts during his career, but he’s never beaten anyone that talented.

In contrast, Brook has a win over Shawn Porter, who is better than anyone Crawford has ever fought during his career. Brook also gave Spence and Gennady Golovkin a run for their money in his fights with them several years ago.

“We’re weighing it up. First, we’ve got to see if we can put the match together. Then the venue,” Duboef continued.

Nother day in the office