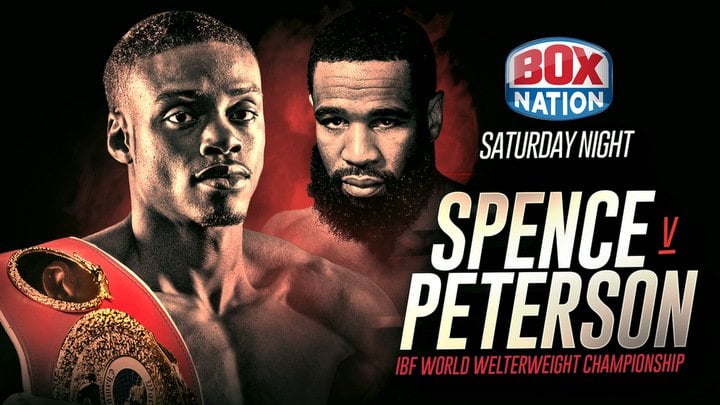 BoxNation is set to get 2018 off to a bang this weekend when undefeated IBF welterweight world champion Errol Spence Jr makes the first defence of his title against former two-division world champion Lamont Peterson.

‘The Channel of Champions’ will air the mouth-watering clash exclusively live in the UK and Ireland this Saturday night from the Barclays Center in Brooklyn, New York.

In a talent-stacked division 28-year-old Spence is regarded by many as the number one fighter at welterweight and will be looking to prove that unequivocally this year but must first get past a formidable challenger in Peterson.

The Washington DC native Peterson is known for his aggressive and come-forward approach in the ring, collecting world titles at 140 and 147 pounds while facing some of the biggest names in the sport, including Danny Garcia, Amir Khan and Timothy Bradley.

This Saturday night’s clash, exclusively live on BoxNation, is sure to have fans on the edge of their seats with the exciting Spence coming-off a dominant 11th round win over Kell Brook last summer in which he claimed the IBF welterweight world title.

Unbeaten Spence, who has 19 KOs in his 22 wins, is aiming to carry on where he left off but 33-year-old Peterson is also in good form having returned to the ring last year to claim the 35th win of his career over tough Russian David Avanesyan.

“My goal is to unify the welterweight division in 2018, but this fight is a true test and Lamont Peterson is a veteran that I definitely will not overlook,” said Spence. “I sparred him in the amateurs and I know what he brings to the table. I have to get through him to achieve my goals and that is what I plan on doing on Saturday night.”

Peterson too is in an upbeat mood going into the fight and is ready for the challenge ahead.

“First off, I’m happy to be getting back in the ring,” said Peterson. “I’ve stayed in the gym and I’m ready to go. This is a fight I wanted and as I said before when I became a welterweight, I want to fight the best and make the fights that people want to see. I’m ready to give it my all and give the fans a great show.”

Jim McMunn, BoxNation Managing Director, said: “We are delighted to get 2018 off to a fantastic start with this special fight on Saturday night. Errol Spence Jr is one of the most gifted fighters in this sport and perhaps the very best at welterweight. He will be looking to prove that he is the undisputed number one at 147-pounds and that starts this Saturday night exclusively live on BoxNation when he takes on a former two-division world champion in Lamont Peterson. This fight has all the ingredients for an enthralling toe-to-toe matchup that BoxNation subscribers will not want to miss.”

Hall of Fame Boxing Broadcaster Al Bernstein has done one of his Quick Hits videos previewing the January 20th Errol Spence Jr. title defense against Lamont Peterson. The video, which includes Al’s keys to victory for both fighters, can be seen at www.youtube.com/ AlsBoxingHangouts.

Bernstein will be ringside for this match at the Barclays Center in Brooklyn in his usual role as analyst on the SHOWTIME telecast. Al said, “Errol Spence is clearly a potential star in boxing and his performance in winning the title against Kell Brook in England was remarkable. He is a relentless attacker who gives you no room to breath. But, Lamont Peterson is a superb fighter and former champion who has faced a list of terrific opponents in his career. He is always prepared and covets this chance again on boxing’s center stage—he will not be easy for Spence to get past in his first title defense.”

Al said this is just the beginning of what he sees as a great year for SHOWTIME boxing and the sport in general. He said, “We already have some great matches on our SHOWTIME schedule with more to be announced. 2017 was a great year for boxing and it appears 2018 will be just the same. There are great fights dotted throughout the sport’s landscape.”

Al Bernstein returns to the Tuscany Suites and Casino in Las Vegas on Friday, February 16, to again co-host the Kenny Davidsen Celebrity Cabaret Show in the Piazza lounge. Al will perform over a dozen songs in an evening that will pay tribute to the legendary Nat King Cole. Al will have a busy weekend because the following evening he will be ringside at the Mandalay Bay Hotel and Casino in his normal role as analyst on the SHOWTIME telecast of the Danny Garcia-Brandon Rios match.

Al said it will be fun to mix music and sports together that weekend. He added, “I know many boxing celebrities and fans will be at the Tuscany on Friday night to start off the boxing weekend and I am glad we can provide them a fun event to kick things off. It’s exciting for me to be co-hosting with Kenny again and get to perform with his talented band. Great singers from shows in Las Vegas come by and join into the festivities every Friday night at the Tuscany for Kenny’s show and we have a great line-up ready to join me in paying tribute to the wonderful Nat King Cole. We will all enjoy singing tunes from his amazing song list.”

For more information on the entertainment at the Tuscany log on to www.tuscanylv.com.